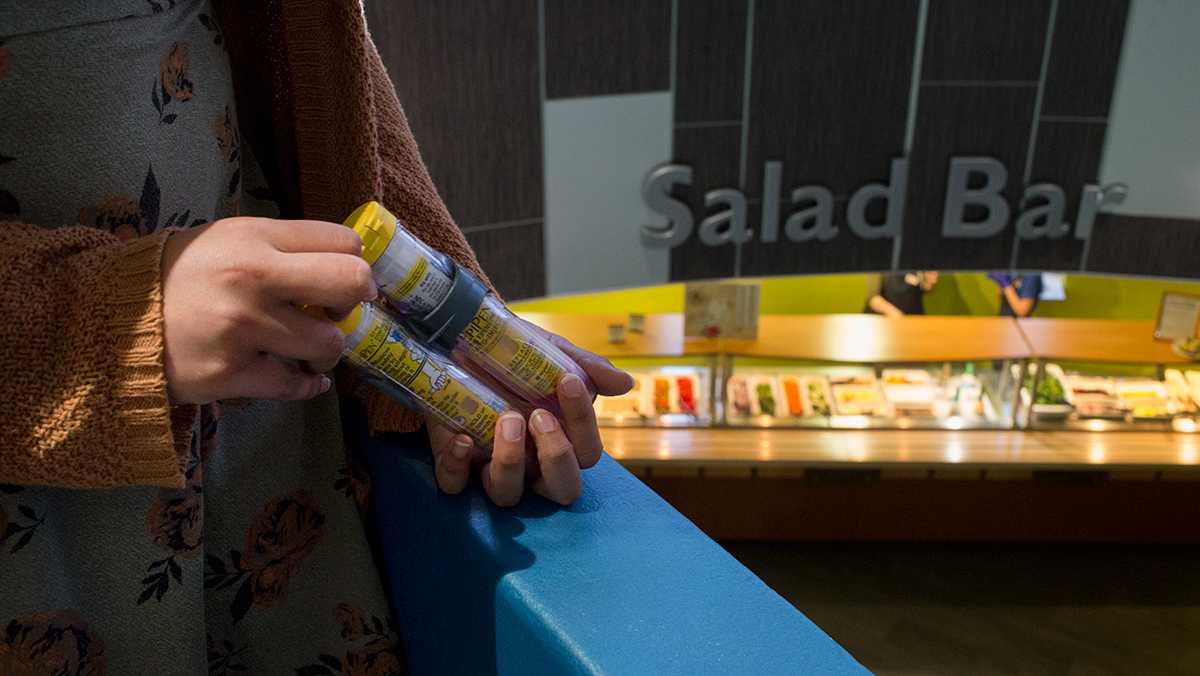 Fernando Ferraz/The Ithacan
A student stands in front of the Terrace Dining Hall with an EpiPen. Multiple students at Ithaca College have reported having allergic reactions from cross contamination and mislabeling of food in the dining halls.
By Falyn Stempler — Staff Writer
Published: March 1, 2017

Junior Kris DiNardi’s dinner plans for Dec. 6 did not turn out the way she had expected.

She watched as the chef at the vegan station in the Campus Center Dining Hall sprinkled an unidentified substance onto her taco. She asked what it was and said she was told it was peanuts, which she is not allergic to. But after taking one bite, DiNardi said, she knew that the taco was either spicier than expected or contained a type of tree nut, an allergen she is deathly allergic to.

As her throat began to swell up, she conferred with the chef and found that the taco contained both peanuts and cashews, a tree nut DiNardi knew she was particularly sensitive to. She said she immediately administered her own EpiPen, loaded with epinephrine, to slow down the reaction. DiNardi had the dining hall staff call the Office of Public Safety and Emergency Management, and officers took her to the Cayuga Medical Center emergency room, where she waited 45 minutes to be helped.

Many students at Ithaca College who suffer from food allergies complain the services at the dining halls are inadequate and in some cases are resulting in allergic reactions. Improper signage and labeling of food, improper cleaning resulting in cross-contamination and improper training of dining hall staff are the main complaints from those who struggle to find food that adheres to their dietary restrictions and disabilities.

DiNardi said she was worried because she wasn’t sure if she would have a mild or severe reaction, and if she had gone into anaphylactic shock, she knew that she could have died.

She said her reaction made her throat burn; she was heavily coughing and was limping because of the EpiPen shot into her thigh. She had to get prescription steroid medication to reduce inflammation of her throat, and her immune system was weakened. She also said her poor health conditions affected how she did on her final exams in the fall.

A food allergy is considered a disability under Section 504 of the Rehabilitation Act of 1973 and the Americans with Disabilities Act.

“For a lot of these students, they don’t recognize their allergy is actually a disability according to the Disabilities Act,” DiNardi said.

After the reaction occurred, DiNardi said, she met with Danine Chaires, operations director of Dining Services, someone she was in contact with before the incident. She said she told Chaires about the allergic reaction and asked that a policy be put in place wherein all food served in the dining halls must have both its nutritional and allergen information available and that staff members should be trained in emergency situations and in cross–contamination. She also asked they be trained in different types of nuts because in the past, she said, the dining halls did not distinguish between tree nuts and peanuts.

Scott said if students complain to dining services about improper signage or their specific allergy that it will be addressed, but did not say if the policies DiNardi wants implemented would be taken into consideration. Chaires said she cannot disclose the information she discussed with DiNardi.

David Prunty, executive director of auxiliary services, said via email that allergic reactions are very concerning to dining services and that whenever one occurs, dining services staff is required to report it. He said he has only heard of one reported incident this semester.

“Whenever allegations of allergic reactions are made an immediate investigation is conducted, and if found to be true, immediate action is taken to respond to the incident and any staff member who might have caused the incident,” Prunty said.

DiNardi said Dining Services has taken action on some of the things she demanded, like proper signage, but there are other issues that have not been properly addressed, such as more dessert options that contain no allergens.

“They are obviously listening to my concerns, which I am very happy about, but there are some things I wish could be sped up,” she said.

With a less common and severe allergy — citrus — freshman Nicole Lack said she struggles to find food that adheres to her vegetarian diet because often, vegetables are doused in lemon and citrus zest.

“It’s really hard with the open buffet style,” Lack said. “The cards have the common allergens like soy, wheat, gluten, peanuts. So I always have to ask the servers, and they don’t know.”

Lack said she has also had allergic reactions due to cross–contamination of ice cream in the dining halls. She has broken out in rashes accompanied by hives all over her body for about three days, having to take Benadryl to sooth itching and redness. She said she has brought this issue up with the dining hall service staff before and suggested it make an allergen-free scooper for ice cream.

“It isn’t right for somebody who already has to fight for what they can and can’t eat to have to fight even harder, especially on a college campus when most people don’t have the resources to go out and buy their own food,” Lack said. “Hopefully, Sodexo will see this and fix their act up because this is ridiculous.”

This was also an issue for sophomore Alexa Dargis, who said she had a nonsevere allergic reaction when the ice cream scooper mixed with peanut butter ice cream at Terrace Dining Hall. At the deli station in the Campus Center, even when she makes her own sandwiches, she said she has had nonsevere allergic reactions because the silverware was not properly cleaned. As a result, she applied for housing in a Garden Apartment her sophomore year so she could cook her own food.

“I couldn’t trust that the dining hall food wasn’t cross–contaminated,” Dargis said. “It’s crazy the lack of cleanliness that there is.”

Freshman Ali Curcio, similar to Lack, said she struggles to find food as a vegetarian with a more obscure ginger allergy. She said the Bite app, an app that has information about what food will be at the college’s dining halls for every meal, is often wrong about the food available in a given dining hall, which is frustrating.

“It’s extremely hard to find food to eat being vegetarian, and then when you incorporate in an allergy — and I think this goes for most allergies, not just mine — it’s nearly impossible and beyond frustrating,” Curcio said.

The menu items for each dining hall on a weekly cycle are labeled with allergen information on the Ithaca College Sodexo menu website and on the Bite app.

Freshman Mikayla Caruso said she thinks there needs to be better labeling of food and a better cleaning process to avoid cross–contamination. She said she has suffered from two allergic reactions because her food was cross–contaminated with sesame, which she is allergic to. Both times, she said, she got hives, and her throat swelled up. One time, she administered her own EpiPen, and the other time she went to the Hammond Health Center and was sent to the hospital despite her insisting it was not necessary. She said her family got an expensive bill for the ambulance that was paid by her own insurance.

“I don’t need for it to be taken out of the dining hall or anything, but labeling is the only thing they really need,” Caruso said. “It would be convenient if they stuck sesame on their allergy list because it is becoming a more common allergy.”

Caruso said she knows at least 10 other students with a sesame allergy on campus.

A freshman Sodexo worker who works at both Campus Center and Terrace dining halls said the dining hall staff is not trained about the food and is told to direct any students who ask questions about food to the chef. The student did not want to be identified for fear of losing their job. They said that occasionally, people ask if the food contains an allergen or if it is vegan, and they have noticed that sometimes the signs are not correct.

Scott said students with food allergies need to speak up so the college can assist them.

“If a student feels that Dining Services cannot accommodate their dietary needs due to a medical condition, the student is encouraged to apply for dietary accommodation or a meal plan exemption,” Scott said.

Mary Proctor, one of the co-owners of Cayuga Compost, said the eating utensils used by Ithaca College Dining Services in places like IC Square and Grand Central Cafe have not been breaking down at her facilities.