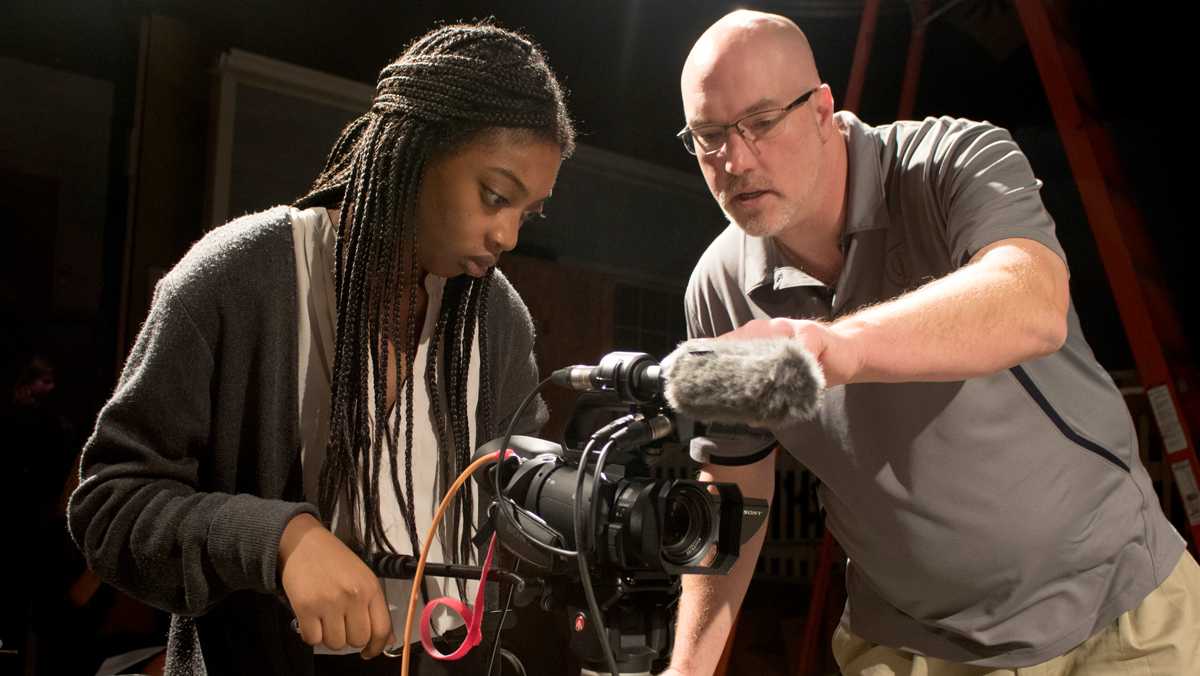 Courtesy of Elena Maria Piech
From left, Kalia Kornegay ’18 and James Rada, associate professor and chair of the Department of Journalism. The documentary they filmed in the Fall of 2017 is now airing on several PBS stations across the country.
By Sam Haut — Staff Writer
Published: January 21, 2019

A documentary created by Ithaca College students and faculty about the life of Martin Luther King Jr. is set to air on several PBS stations across the country from Jan. 13 to Feb. 1.

The documentary, “With Infinite Hope: MLK and The Civil Rights Movement,” not only covers King’s life but also many of the important events surrounding the civil rights movement, from the Freedom Rides to the Memphis Sanitation Workers Strike. Though the footage for the documentary was taken in 2017, it is airing now to coincide with King’s 90th birthday.

James Rada, associate professor and chair of the Department of Journalism, initiated and helped students with the logistics of the project along with co-producer and co-editor Chrissy Guest, assistant professor in the Department of Media Arts, Sciences and Studies.

Rada said the inspiration for the documentary came after he contacted the Memphis PBS affiliate in Spring 2017 to do a project about  King that focused on the 50th anniversary of King’s assassination in April 2018. During the Spring 2018 trip, Rada and a group of students helped cover events held to remember King for WKNO, Memphis’ NPR affiliate.

When Rada first contacted the Memphis affiliate to organize the trip, it suggested that he also do a bigger piece on the civil rights movement, which Rada and six students did in this documentary.

Rada selected six students to travel down to Memphis, Tennessee, in October 2017 to interview seven historians and 16 other people with varying levels of involvement in the civil rights movement. The students traveled to Memphis because that is where King was killed.

The students chosen by Rada to participate in the project included Christy Calcagno ’18, Kalia Kornegay ’18, Emily Varga ’18, senior Katie Jones, senior Elena Piech, and senior Sophia Tulp These students were chosen based on recommendations by faculty members. The students and Rada did not get paid to work on the documentary.

In conjunction with the trip to Memphis, Rada traveled to Alabama, the home of many famous moments in the civil rights movement, to talk with various people about the movement. Organizations like The Selma Times-Journal, the Freedom Rides Museum in Montgomery and the Birmingham Civil Rights Institute helped Rada set up interviews with people well-versed with the civil rights movement. The project received funding from the Roy H. Park School of Communications, the college and Rada, who said he picked up some of the cost himself.

Rada said the people they interviewed for the documentary were open to interviews and provided great hospitality.

“They literally, in some cases, opened their homes,” Rada said. “I think we interviewed two people in their homes, and you want to talk southern hospitality. They offered us coffee and snacks; they were more than happy and more than willing to talk, absolutely. The folks in Memphis were absolutely wonderful.”

Rada said the documentary will tell people not just about what King did but also will provide details about the civil rights movement that most people might not be familiar with.

“It also gives some behind-the-scenes history of some of the logistics of the civil rights movement that people don’t know about,” Rada said. “They talk about some of the machinations of the bus boycott, how did they get the word out in an era before fax machines, before social media. How do you protest a state government if you are a state government employee?”

Rada said he was surprised to learn about the methods the protestors at the time used to let people know that there was going to be a march happening.

“In Birmingham, a radio DJ on air used code language,” Rada said. “What he would say is this: ‘It looks like a good day to bring your toothbrush with you.’ Now, that doesn’t make a bit of sense unless you realize what he’s saying is, ‘You might be locked up tonight; you need to bring your personal hygiene products with you.’ It makes perfect sense. When I was talking with the three people from Birmingham, who said, ‘Well, we heard on the radio, “bring your toothbrush,” we knew.’ And it’s like oh, wow, you have that moment.”

“She had her children with her, and her children and her were maced in the face,” Jones said. “When she was telling that story … it became so real that the person in front of me actually experienced violence from the other side, on a movement where she was just trying to promote rights for herself. Hearing that story just made it more real for me. It’s such a scary thing to go through, especially when you have children. That will always stick with me.”

Jones said that doing the documentary made her realize what actually happened during the civil rights era, more than any museum visit could portray.

“You hear about the civil rights movement, you go to the museums, you see all the stuff and you know it happened,” Jones said. “But when you sit down and actually talk with people who were actually involved in this, it just makes it more real for you — actually being able to understand what these people went through to just achieve political and civil rights for themselves. Even the women we talked to, she’s a woman of color, I’m a woman of color — that was just something I connected with her on.”

Jones said their documentary is unique because they focus on the people who made the movement possible, and not just on the work of King.

“A lot of documentaries in the past have just covered MLK and have just looked at the civil rights movement,” Jones said. “But I think this documentary is going to be very special because it really delves into the stories of those who were actually on the ground level, actually doing the grassroots movements and actually the ones who forced a change. MLK did do a lot, but he did a lot with the help of these people.”

Calcagno said that being able to meet people who lived and participated in such a volatile moment in history was inspiring.

“It was inspiring to learn the stories of these people first hand,” Calcagno said. “You get to see them all in movies and other documentaries and radio. But being able to actually meet them in person, let them know you by name and just kind of, telling them about their lives as teenagers, and as kids or even as adults. A lot them that we talked to were just adults and just followed King and were with King.”

Calcagno said she remembers the story of one of the people they spoke with who was there when King was assassinated.

“One of them was even at the hotel right before he was assassinated,” Calcagno said. “He was working to end a sanitation workers strike. It was one of the many reasons why he came down to Memphis. He was in the lower level of the hotel. King was in the second floor, at the Lorraine Motel trying to make the phone calls if people are going to be on board with him to stop this strike. He told us that he had just about got everyone on board with him and was about to go over to King and say, ‘Hey, you did it,’ and he heard the gunshot.”