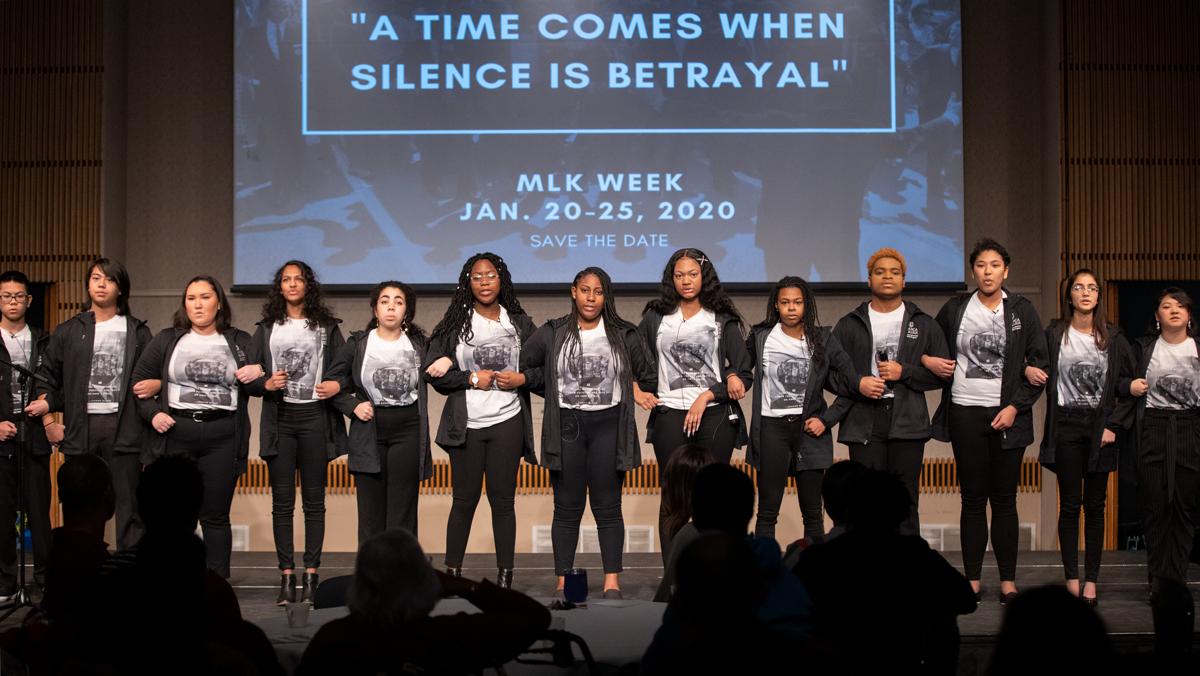 Martin Luther King Jr. said to a crowd in 1967, “A time comes when silence is betrayal,” and that line was the theme for Ithaca College’s annual MLK Week. For the college’s Martin Luther King Scholar cohort of 2023, continuing King’s fight for social justice cannot be achieved without solidarity.

“As we learn about and celebrate the legacy of Dr. King, it’s important to recognize that the movement predates him and outlives him,” freshman Talia Morris said at the college’s annual MLK Scholar presentation Jan. 20. “We have a place in it.”

The presentation took place during the college’s 13th annual MLK Week from Jan. 20 to 25, a presentation that honors King’s 91st birthday. The week began with the freshman class of MLK Scholars’ presentation from 10 to 11:30 a.m. Jan. 20 in the Emerson Suites followed by a brief sermon from La Jerne Cornish, provost and senior vice president for academic affairs. The students’ presentation offered an overview of the history of the civil rights era while critiquing the exclusivity of the movement and relating it to the injustices of today.

The following days consisted of Student Leadership Institute student workshops, a seminar about the media and the 2020 election, a presentation from Rabbi Saul Berman about the role of Jewish Americans during the civil rights area, an interfaith dinner, an MLK Shabbat service hosted by Hillel at Ithaca College, an MLK concert and MLK Day of Service. Throughout the week, there was also a self-guided media exhibit in Clark Lounge. The events were chaired by Omega Hollies, assistant director of the Center for Inclusion, Diversity, Equity and Social Change.

The cohort spoke about how 36 years since enacting the Civil Rights Act of 1964, African Americans are incarcerated at five times the rate of their white counterparts. They also discussed how in 2019 the number of individuals turned away at the border increased by 68% from the previous fiscal year, and 267,000 were deported, which is a 10% decrease from the previous fiscal year, according to the 2019 Fiscal Year ICE Enforcement and Removal Operations Report. These issues were the focal point of the cohort’s presentation.

“The issues important to our generation today have roots going back hundreds of years,” Morris said during the presentation.

Derek Adams, associate professor in the Department of English, said people can have mixed views about what the civil rights movement meant for the country. For some, it is difficult to accept and learn that racism did not end with the Civil Rights Act.

“If we think about how much effort into making race what it is in the United States, I mean we had to build slavery and a system of Jim Crow,” he said. “We did that over the course of centuries, and, in some ways, we continue to do that. So if we are really serious about undoing that, think about the Herculean effort it would take to get that done, and we’re already having a hard enough time showing up for MLK day celebration.”

For Adams, he said he believes that the idea of “post-racialism” prevents people from attending events like MLK Week and refraining from engaging in difficult conversations. Post-racialism is the idea that racial prejudice is no longer a major social problem, and the election of Barack Obama, former president of the United States, is often cited as the beginning of a post-racial era.

“There will be more people at Ithaca College who don’t go to these things than who do go to these things,” he said. “This is a campus that really prides itself on being progressive and antiracist and pro-LGBTQ, there’s a whole bunch of ways in which this campus and the people in it want to pat themselves on the back for being better than a lot of the bigots we encounter in our lives.”

The MLK Scholars are required to take a seminar about the U.S. civil rights movement taught by RahK Lash, interim director of the Center for Inclusion, Diversity, Equity and Social Change. He said the class focuses 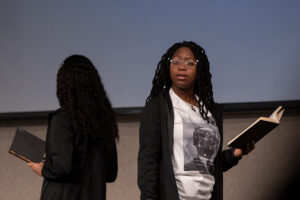 heavily on humanizing activists like King by acknowledging their flaws but not invalidating their success.

The cohort members started their presentation by explaining that during their first semester they learned there is more to the story about the civil rights movement and King than they previously were taught. For example, despite associating the civil rights movement and lynchings of African Americans with the South, the cohort explained that there was a branch of the Klu Klux Klan in the Ithaca area. In October 1925, there was a lynching on the city fairgrounds on Meadow Street near where Tops Friendly Markets and Wegmans are currently located.

The scholars dedicated a portion of their presentation to critiquing the lack of diversity in the civil rights movement, which excluded women and members of the LGBT community. The scholars also shared their struggles to find their places in the movement, whether it was because of their gender, sexual orientation, race or mixed race identities.

Freshman Robert Spencer presented a dialogue titled “Where there ain’t no space for rainbows.” He spoke about his struggle to see his identity in the civil rights movement as a member of the LGBTQ community and black man.

Freshmen Jolivia Manning, N’Kaylah Simmons and Massaran Cisse also presented a dialogue titled “Who Gon Move Me” about all the black women who served as the backbone of the civil rights movement but whose work was overshadowed by the men in the movement.

Simmons expressed the struggle of African Americans not knowing their origins because of slavery.

“I felt like I had no right to claim Africa,” Simmons said. “I had no flag to represent during culture day. I had no knowledge of my own origins, so how could I defend yours? … I never got to learn about the culture, which I not dare call my own. I was lost.”

Freshman MLK Scholar Kristin Ho said she thinks that the fight for social justice is ongoing and that white campus community members need to be allies.

“It’s important to recognize that the civil rights movement was a long–term effort,” she said. “It didn’t happen overnight. The movement is still very much happening even now.”