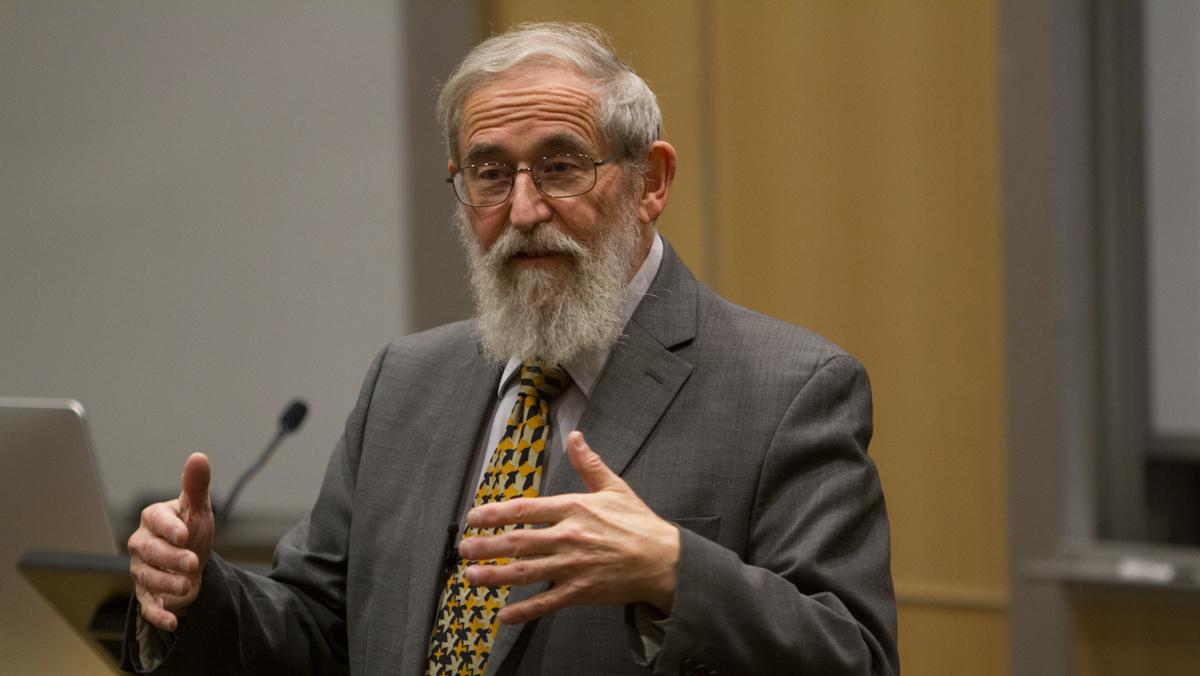 Speaking in Textor Hall, Berman began his speech by reading the names of the 40 people killed during the civil rights movement. He said he did this because he felt it was important to remind the audience about the seriousness of civil rights issues.

Berman said he was the Rabbi of Congregation Beth Israel in Berkeley, California, from 1963 to 1969. During that time, he became active in a local movement to desegregate grade schools in Berkeley. In 1965, he joined a local board of Rabbis on their trip to Selma to advocate for civil rights.

Once he arrived in Selma, he joined a demonstration against Joseph Smitherman, the mayor of Selma, that was occurring because some felt Smitherman was not effectively promoting civil rights in the city.

Berman said he and approximately 200 other activists were arrested by authorities for disobeying orders to cease and desist during the demonstration. He said they spent about four days in prison.

During Berman’s time in prison, police chief Wilson Baker offered to let the activists go as long as the clergymen agreed to leave Selma, Berman said.

Berman said that he and his fellow clergymen initially began to debate what they were going to do. Some of the local residents began to express concerns that they were not able to have input into the decision that impacts them.

“From their perspective, this was just another instance of colonization, another instance of demeaning them, as if they could not participate in the discussion about their own future,” he said. “After a while, they began to become very vocal about that denial.”

Eventually, the clergymen agreed to let everyone vote on the issue. A majority voted to remain in prison rather than force the clergymen to leave Selma. Shortly after reaching that decision, Baker told them he wasn’t going to book them.

Berman said Baker told the activists that although he thought they deserved to be in prison, he could not allow reporters, who were expected to enter Selma for the impending Selma to Montgomery marches, to see that nearly 50 clergymen were booked. As a result, Baker freed the activists.

After Berman finished his speech, he facilitated a Q&A.

Barbara Harrison, a resident of Ithaca who grew up during the civil rights movement,  learned about the event through her synagogue. She asked about Berman’s thoughts on the Poor People’s Campaign, a movement to gain economic justice for the poor during 1968 that activists are currently trying to revive. He said he hopes people support it.

Harrison said she came to the event because she wanted to learn how she could break through partisan lines when discussing pressing issues.

“I feel that if we are going to bring people on board for any issue, we need to take a different approach, rather than speaking down to people,” she said.

Lauren Goldberg, executive director of Hillel, who helped organize the event, said it came as a result of an anonymous donation. After the speech, she said she was grateful that Hillel got to collaborate with the college for MLK Week.

“I was deeply moved by what he had to say,” Goldberg said.

Freshman Aaron Segal said he was excited to hear from Berman because his grandfather is a rabbi who was also involved in the civil rights movement.

“These types of people are getting few and far between, just like Holocaust survivors,” Segal said. “So it’s really special to be able to see and hear from someone like this.”

The Office of Student Engagement and Multicultural Affairs will be sponsoring a series of events in honor of Martin Luther King Jr., on Monday, Jan. 20.