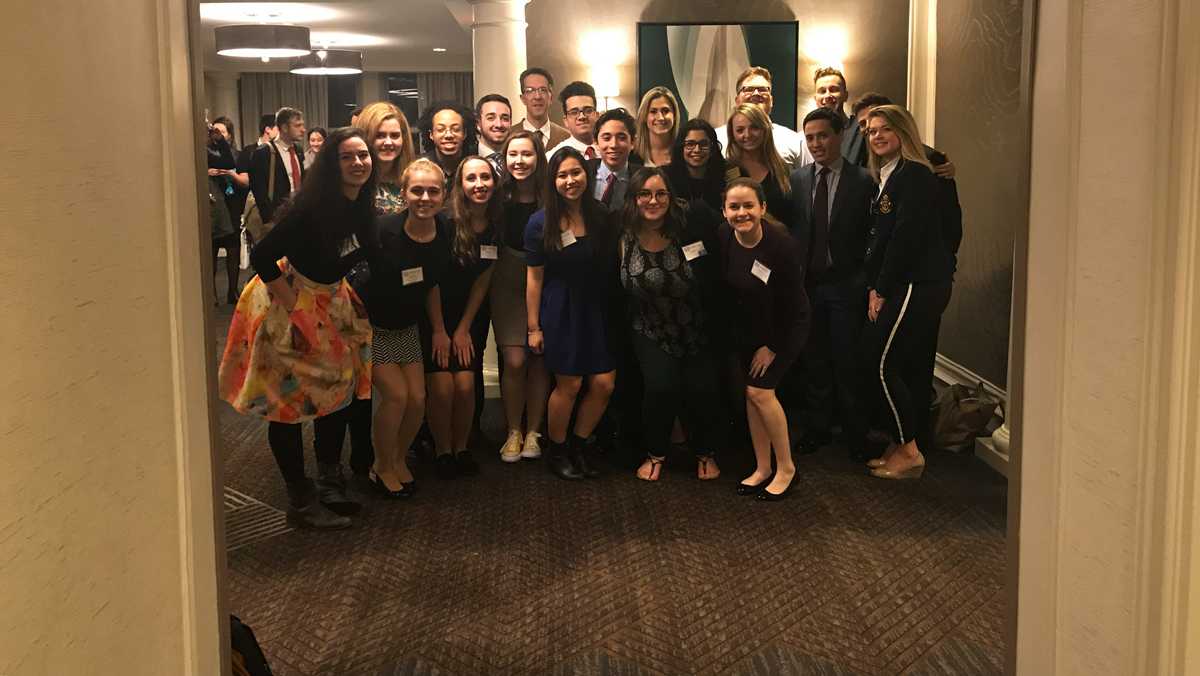 While it may be 2018, senior Hannah Robison is representing Belgium on the crisis committee in the 1956 United Nations General Assembly. She is at the Harvard National Model United Nations, and her job is to represent Belgium on the world stage in an attempt to deal with the Suez Canal crisis and the Hungarian uprising.

Since Belgium was a colonial power at the time, Robison sided with France while on the crisis committee. She said she is appalled by the imperialism that went along with that decision.

“I really hated it,” Robison said. “Supporting imperialistic policies was pretty difficult for me, but it was easy to see how imperialist language and imperialist policies were allowed to maintain. Being in that room for four days made it a little bit more clear how this dialogue and rhetoric is able to persist for such a long time.”

The club currently has 23 members and meets twice a week on Tuesdays and Thursdays.

To prepare for the conference, the team spent its time learning about Belgium as to accurately represent the country.

Juan Arroyo, the club’s faculty adviser and assistant professor in the Department of Politics, has been a part of Model UN for the past decade. Arroyo said that to help the students learn about Belgium, he invited the team to his house to eat food from the country — in this case, Belgian waffles — while also providing useful information related to the country.

“The food is one thing, but I will be making a presentation on politics and policy,” Arroyo said. “But it’s different when you’re not on campus. It’s not in a lecture room. It’s going to be in my living room, so it’s casual but informative. It gives them a context to get a feeling for what the country is about, how they think.”

Sophomore Farwa Shakeel was part of a nongovernmental organization at the conference, where she was allowed to help draft resolutions in any committee related to the economic or social issues. Shakeel decided to join the commission on the status of women, where she helped create a resolution that was passed by the commission to advance the rights of women.

“I just like it because it gave me a lot of autonomy, and I feel like people just in general are more willing to work with you when you’re an NGO because you’re a neutral party,” Shakeel said. “I served as like a mediator and made sure that resolutions were taking into account internally displaced women.”

Senior Conor Friend is one of the two head delegates in Model UN. As such, he leads the meetings to get the club prepared for each of the four conferences it attends. Friend said conferences are structured similarly to real United Nations meetings: Members write resolutions that get voted on by the committee and try to get the other members in that committee to vote with them.

Friend said that at the conferences, students participate in a wide variety of committees to draft resolutions that they then bring to the general assembly to vote on. Friend said there is also a crisis committee, for which students act as cabinet members and deal with crisis scenarios.

“The people who run the conference will come up with adverse scenarios that you as a cabinet will have to navigate through — anything from a military action to a political crisis to a natural disaster,” Friend said. “You really learn how to think on your feet.”

Friend said while there is not a single winning team, awards are given out for best delegate, outstanding delegate and honorable mentions. He said there are times when people will care more about receiving those awards than accurately representing their country, and they call these people “gavel hunters.”

Senior Carly Cote, the other head delegate in the Model UN club, said gavel hunters can be hard to deal with, especially because the majority of people at the conferences tend to be male.

“Model UN is predominantly male, just coming from a female’s perspective,” Cote said. “With the gavel hunters, courtesy can go out the window, and you have to hold your own. Sometimes people are nasty, and you have to learn how to fight back.”

Cote said that although these things happen, they are overshadowed by more positive experiences she has had while being a part of Model UN. Cote said that at the Harvard conference, when faced with a gavel hunter from Yale, she spoke with him after the committee finished to remind him of the importance of diplomacy and working with others. Cote said he respectfully listened to what she had to say.

“I would say for every one negative experience, there’s 20 positive experiences,” Cote said. “That’s something that’s there and is reflective of what’s going on in the political atmosphere as well. But if anything, it better prepares you to hold your own.”

Journalists visit Ithaca College for a panel discussion on news engagement for the celebration of National News Engagement Day on Oct. 7.