More than Me founder discusses inspiration 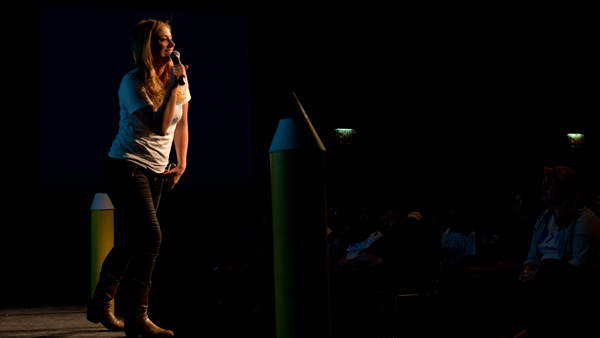 Katie Meyler, founder of the national More than Me organization, works to get girls in Liberia off the streets and into school. The foundation raises funds to pay for tuition, school supplies and lunch for Liberian girls aged between 5 and 15 — some of whom have worked as prostitutes to pay for school.

The foundation is building its own school, the More Than Me Girls’ Academy, which is expected to open in Liberia this September. This year, More than Me also won $1 million at the annual American Giving Awards on NBC.

Assistant News Editor Noreyana Fernando spoke to Meyler about her experiences growing up, the inspiration behind More than Me and her response to those who object to the foundation’s approach to Africa.

Noreyana Fernando: Tell me a bit about yourself and where you grew up.

Katie Meyler: I grew up in Bernardsville, New Jersey, which is 30 minutes outside of New York City. It’s a really wealthy community … There are like princes and princesses and these beautiful homes and helicopter landings on houses … My parents got divorced when I was six, and my mom worked at a factory, so she worked the overnight shift at a factory making minimum wage. That’s how I grew up — poor.

KM: My sister dropped out of high school. She was 15, and she was on the streets doing whatever she could do to get her next high … It was really hard for me to see my sister head in that direction. I think as my role model, I partially wanted to be like her but also hated the direction that she chose. I started … smoking pot when I was a freshman in high school, skipping classes and not going down a very good path. And then I got really involved in my youth group … I got addicted to doing those things, because it felt good to help people. And I got attention for it. I think also at a young age, getting attention, positive attention was really, really healthy for me … My life had changed drastically. My grades went up. I became a leader in my school … I graduated high school with the highest ever recorded community service hours in the county and got an award from Bill Clinton, which provided me with scholarship money.

NF: From where did you get your inspiration to want to work with underprivileged children?

KM: I did my internship for college in Bolivia working with street kids … I met a little boy named Carlito, who slept under a car at night to keep warm, and so that was a marking period of my life where I feel like my heart was marked and I knew that I was going to work with street kids.

NF: What was it about Carlito that inspired you?

KM: Carlito was four … He lived in Santa Cruz, Bolivia, in downtown. When I first met him, he was playing with a glass bottle on the street. He couldn’t walk yet — he was 4 — but he would crawl on his stomach like a worm. He was by himself at 4 years old. I hadn’t really been exposed to what a street child was until then … He must have put something in my drink because I fell in love with this kid. He was so pure, and he loved me so much … We just had this bond, a really close friendship. He had never eaten ice cream before, so we went to this ice cream place, and I remember he didn’t know how to use his spoon. So he just put his face into the ice cream. Everyone in the restaurant was looking at me strangely, because there were rich people in this place … The reaction was ‘Who are you? A foreigner coming into our country, thinking they are going to save the world by buying one kid ice cream. That doesn’t do anything for him.’ The truth is that I am not sure that it did. It made him happy for 45 minutes. I think about him all the time.

NF: What is the importance of having MTM at a college-level?

KM: College students have this idealism that hasn’t been tainted. I think about Grace [Schroeder] and this team, they really really believe they can change the world. I believe they can too … They are still full of this energy to do something good. And it’s like fire. It’s inspiring and they inspire other young people.

NF: What is your message to people who have objected to More than Me’s portrayal of Africa?

KM: I am expecting to meet some of these students, which I am excited about. I have talked to some of them. I think it’s important for there to be communication. I think it’s good that there are young people that are expressing how they feel about how the Ithaca College team is portraying Africa or Liberia. You have a bunch of young people that are extremely idealistic … [All of them] haven’t been to Africa. They haven’t been to Liberia. They are still learning. I think they are just saying their limited understanding of what the issues are. They are saying ‘I want to do something.’ That doesn’t mean that they figured out how … I think they are going to make mistakes and I think they are definitely open to admitting that … It’s not just them. I am there too. We are not perfect. The way that we communicate some things, sometimes it’s going to offend people. But if you are worrying all the time about not offending anybody, you are never going to do anything.