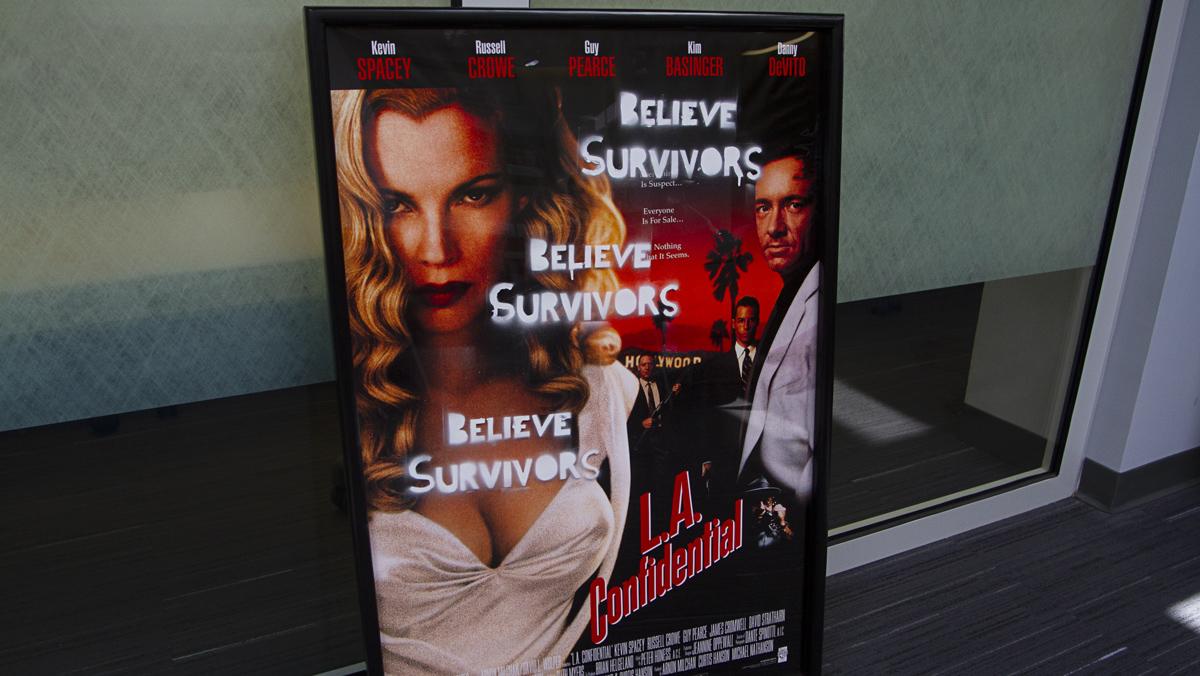 A movie poster of the film “L.A. Confidential,” which was hung in the basement of the Roy H. Park School of Communications, was vandalized with the phrase “believe survivors” sometime between March 28 and March 29.

“L.A. Confidential” starred now-disgraced actor Kevin Spacey, who has been accused by more than 30 individuals of sexual assault. The movie poster was hung up in the Park School because it was in part produced by Michael Nathanson ’78. The poster has since been removed from its position, said Diane Gayeski, dean of the Park School, who added that she thought the vandalization of the poster provided necessary critique.UPDATE: Students react to Kevin Spacey movie poster vandalism

“I actually see it as a very valid and interesting commentary,” Gayeski said. “It shows that people are taking notice of actors and other people who are being called out for inappropriate behavior in our field.” 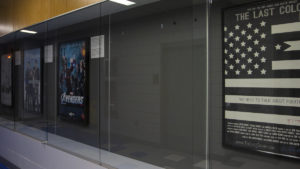 The L.A. Confidential movie poster has since been removed from the Roy H. Park School of Communication. Kristen Harrison/The Ithacan

Gayeski said the poster was taken down not because of the “believe survivors” message that was spray-painted on it in three areas but because she felt that its presence offended some community members.

“I’m not taking it down because I don’t respect the protest,” Gayeski said. “I think it would be a great thing to talk about.”

Because of this incident, Gayeski said the Park School will take a look at the other posters hung around the building and question whether any others could cause the same offense. She said that depending on the circumstances, if other posters are found in the building to have similar controversies, the school would think about also removing them.

Gayeski said the incident also provides the school with a way to discuss and think critically about how students consume film in the wake of the #MeToo era and later tweeted that she would like to include the poster at next year’s Women in Media month held in March, which is Women’s History Month.

April Johanns, coordinator of student and external relations for the Park School, said the display cases should be locked, but some of the locks are missing and one is broken.

“A service request was put into maintenance during winter break for the locks to be fixed, but it has not happened yet,” Johanns said. “A new request has been submitted to our facilities office.”

Sophomore Colin McCann said he agreed with the decision to take the poster down because the poster was on display to honor the work of a college alum and not Spacey.

“I think it should have been taken down because the person who vandalized the poster ruined the main focus of the poster,” he said.

McCann said he thinks people should separate a person’s art from their problematic behavior in their personal lives.

“The character he portrayed in the film did nothing wrong, Kevin Spacey did,” McCann said. “Also, the poster’s main focus isn’t Kevin Spacey, the focus is about the Ithaca alumni. I think it should have been left alone,” McCann said.

Sophomore Jessica Dresch said she thinks the poster should have been left up because it clearly reflects a dialogue regarding sexual assault within the media industry that is also on the mind of Park students.

“I don’t think it does much for anyone to just take it down,” Dresch said. “If this is the way that someone wants to spark this conversation, then that is how they are going to do it. Rather than taking it down, we should continue the conversation from the outcome of someone defacing this poster.”

Dresch said she thinks the message on the poster humanized the topic and leaving it on display would have impacted students emotionally.

Sophomore Colette Renard said she thought the poster should not have been taken down because of its powerful message that the campus community should be aware of.

“We all should know,” Renard said. “I understand the decision to remove the poster, but to believe survivors is an important message.”