Forum focuses on link between music and the brain 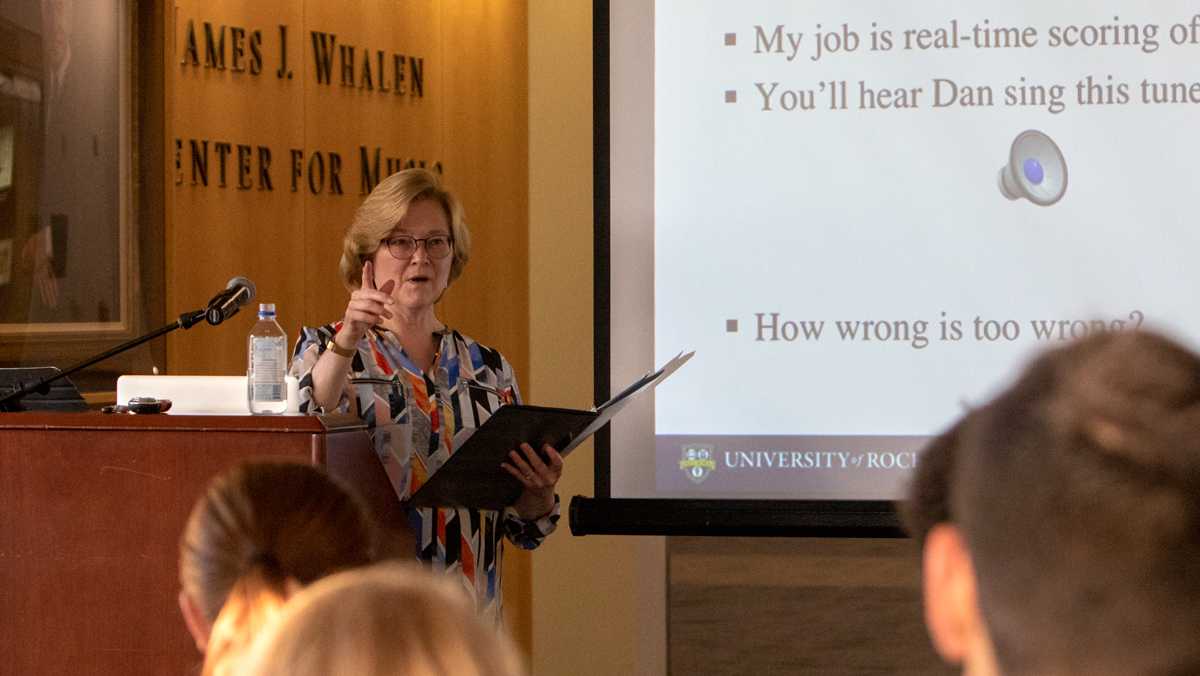 Elizabeth Marvin, a neuromusicologist, discussed the opportunities she has had to change lives through the relationship between music, the brain and language at an Ithaca College Music Forum on Sept. 14 in the James J. Whalen Center for Music.

Marvin, who has dual appointments at Eastman School of Music and the University of Rochester, presented two studies she conducted on mapping music in the brain and the interaction between music and language. For one of the studies, Marvin talked about what she called the most important day of her research life: the time she became the first-ever music consultant for brain surgery.

Marvin recalled sitting in her faculty office and receiving a phone call from Brad Mahon, an associate professor in the Department of Brain and Cognitive Sciences at University of Rochester.

Mahon asked Marvin if she wanted to collaborate with him and Neurosurgeon Web Pilcher on a clinical case. He explained how Dan Fabbio — a New Hartford, New York, music teacher — had been diagnosed with a tumor in his brain close to an area important for music. Mahon asked if Marvin would be willing to help design a test for musical ability that could be used before, during and after brain surgery to track brain functions responsible for music.

Marvin and Mahon were tasked to create a set of musical assessments to map the parts of Fabbio’s brain involved in music activities during functional MRI (fMRI) scanning. Fabbio had to conduct the same musical task during surgery. They decided that they would have Fabbio hum a specific melody during his operation. He would also hear a sentence and speak it back as a language exercise.

This information created a map of Fabbio’s brain that would help guide Pilcher and his team of surgeons in the operating room as they removed the tumor and avoided portions of the brain responsible for Fabbio’s musical talent.

Once it was clear which areas the surgeons needed to avoid, they removed the tumor. Then, in order to confirm that Fabbio’s musical talents were intact postsurgery, Fabbio played the saxophone without fault.

“At that moment, the entire operating room broke into applause,” Marvin said. “It was just amazing.”

For the next study, Marvin collaborated with biomedical engineer Anne Luebke and linguist Joyce McDonough to explore the potential effects of musical training on distinguishing speech among noise.

Marvin said she worked with her collaborators to run a speech and noise experiment. The experiment centered on separating English sentences from surrounding noise in which they compared two tests — a standard one, known as the Hearing in Noise Test (HINT) and a test that they devised. They hypothesized that musicians would perform better at this experiment than nonmusicians.

For Marvin’s new test, she took sentences used in HINT and created modified versions with rhyming words. Marvin found the results in their new test correlated with the HINT results, proving the reliability of it. The subjects, students from the University of Rochester, were split up using the median value of their scores on a music aptitude test.

Marvin said the results do not conclusively explain why this musical advantage exists, so she plans on using the data for a new large-scale replication study that the National Science Foundation recently approved. She said there is potential for the test to be developed into a diagnostic tool.

“It’ll be gratifying to be part of something that could make hearing and noise tests easier, cheaper and more readily available,” she said. “And it might lead someone to seek out professional help earlier on and get hearing aids earlier on.”

Freshman Alice DeRagon said her family background compelled her to attend the forum.

“My grandmother had Alzheimer’s, and they would play her music because it would help her remember things,” she said. “So I’ve always been interested in how music affects the brain.”

Junior Kayla Shuster also enjoyed the event and said she is a fan of the Ithaca Music Forums.

“These are the very cool, not performance-specific events that the music school hosts,” she said. “The way that the different parts of the brain can affect pitch discrimination, making it hard to say even the first note of a melody, was really interesting.”

Marvin ended the forum with details on Fabbio’s status postoperation.

She said he made a quick recovery and was back to teaching music three months after the surgery. Fabbio reported to Pilcher the exact moment he knew the surgery had been a success.

Marvin explained how Fabbio used an electric toothbrush, and every morning when he brushed his teeth he would improvise melodies in his head that went along with the drone of the toothbrush.

“When the surgery was over, those tunes went away. He did not have that at all,” Marvin said. “But one morning he got up and brushed his teeth, and all the music was back in his head. He knew he would be just fine.”