Myrick presents in observance of National Coming Out Day 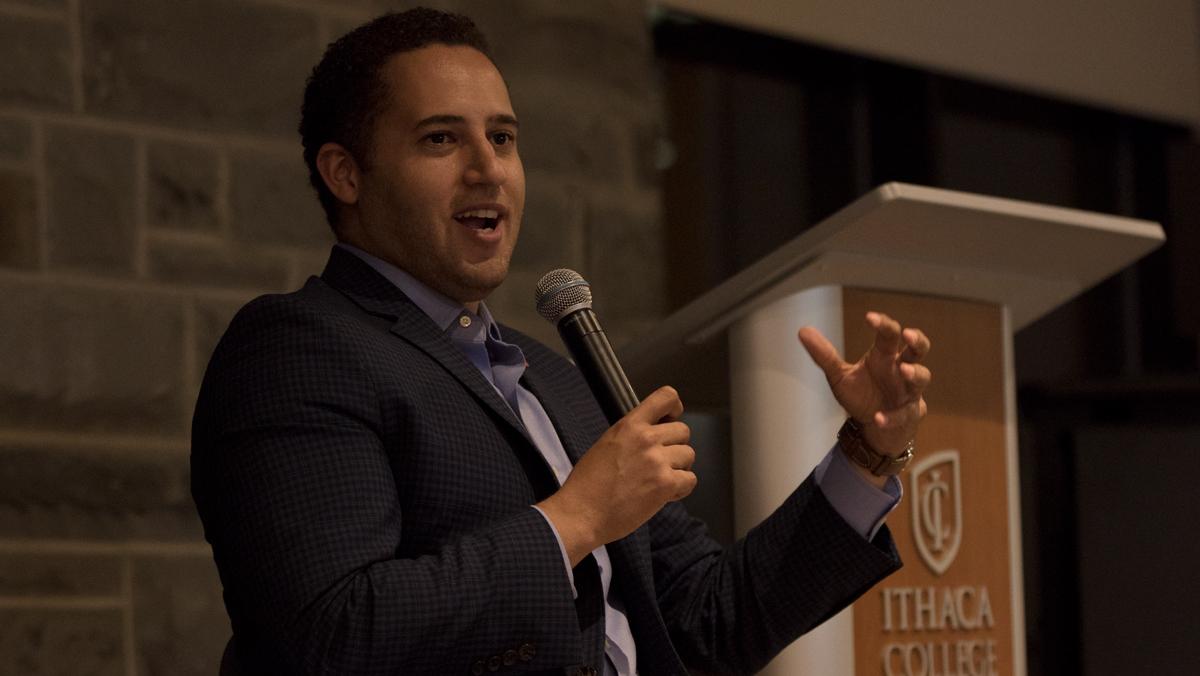 Maxine Hansford/ The Ithacan
Mayor Svante Myrick presented to a room full of Ithaca College community members in observance of National Coming Out Day. During his presentation, he gave advice to the community about how to be allies to the LGBT community.
By Bianca Mestiza — Staff Writer
Published: October 11, 2017

Mayor Svante Myrick informed the Ithaca College community about a new policy protecting transgender citizens that the City of Ithaca is creating and gave advice to community members about how to be allies for the LGBT community at his Oct. 10 presentation in observance of National Coming Out Day.

“In the case that they want their co–workers to know about their transition, it will guarantee a smooth and healthy and inclusive transition process,” Myrick said.

Maurer started the presentation by talking about the importance of allies in assisting members of the LGBT community to achieve their goals. He said the college’s LGBT center was built in part because of the dedicated allies in the community.

“Our history is intertwined with and enriched by the many non–LGBTQ people who have worked in allyship with us over the years,” Maurer said. “That aspect of our campus’ LGBTQ center is unique and significant.”

Myrick is a member of the national Mayors Against LGBT Discrimination coalition. Myrick told the audience he was nervous to agree to speak at the annual event since allies are not officially a part of the LGBT community. He said that he agreed to talk since he thinks it is important as an ally to be visible and listen to members of the LGBT community.

He said that being a good ally means being active and involved in the community. For those who are still trying to establish their sexual identity, an ally can help them feel supported and heard.

Myrick said that although there have been small victories in the LGBT community, there are civilizations, cultures and societies who have moved backward. He said that it is important for elected officials to take concrete steps toward protecting people, especially people in non-dominant positions in society. He also encouraged attendees of the event to vote in elections, so elected officials represent the topics they deem important.

“Politics matter, and elected officials matter,” Myrick said. “We have a bigot … I think the most openly, overtly bigoted president … we’ve had in the White House in three generations, which is a huge vacuum of leadership.”

“He’s a speaker that many students have talked about wanting to host for this event for a long time, and so I, and many students, were very excited,” Maurer said.

Junior Margot Register said that it was good to be able to hear from someone who was still learning about what it means to be an ally.

“I just appreciate whenever a political figure is able to come and speak about a topic that is important to their community,” Register said.

Junior Keilah Figueroa said it was good to have a speaker who was an active ally provide suggestions on how to be supportive. She said, as an ally herself, it was good to hear from a fellow ally.

“I thought it was nice to have an active ally, and someone who is really knowledgeable about how to be an ally, helping to develop what you can do to be helpful,” Figueroa said.

Maurer said the topics Myrick discussed should be topics that continue conversation moving forward to facilitate learning and support in the community.

In light of the recent LGBT suicides that have gained national media attention, the combined staffs of ICTV and WICB/VIC Radio will shoot a multimedia presentation called “It Gets Better” from 1:30 to 5:30 p.m. today in Room 144 of the Roy H. Park School of Communications.