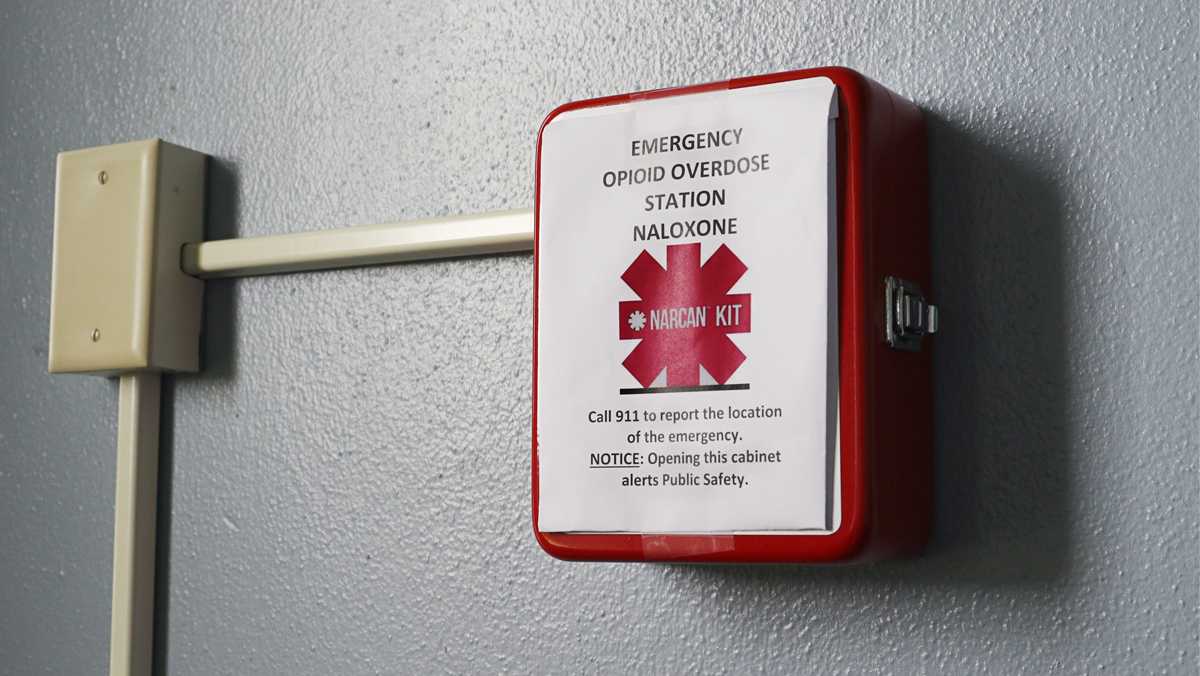 Abbey London/The Ithacan
The naloxone kits are now available inside red first-aid boxes on the walls of most of the lounges or public spaces of residence halls.
By Matilde Bechet — Staff Writer
Published: September 4, 2019

The Center for Health Promotion has added 27 naloxone kits to the residence hall lounges at Ithaca College.

Naloxone — also known by the brand name Narcan — is a medication that works to counteract the effects of opioid overdoses. The naloxone kits are now available inside red first-aid boxes on the walls of most of the lounges or public spaces of residence halls in the lower and upper quads, Emerson Hall, the Towers Residence Halls and the Terraces Residence Halls. The boxes contain two doses of naloxone nasal spray, a face shield, a pair of latex gloves and instructions that explain the process for administering the spray. Information Technology programmed the boxes so that a signal is sent to the Office of Public Safety when the box is opened.

Naloxone was first installed approximately two years ago in the automated external defibrillator kits around campus — which are mostly found in wall cabinets in academic buildings, said Tim Ryan, assistant director for environmental health and safety. These AED boxes are also located in the Circle Apartments and the Garden Apartments.

The Center for Health Promotion decided to expand the availability of naloxone to residence halls after an announcement by the U.S. surgeon general, said Nancy Reynolds, program director for the Center for Health Promotion. This statement recommended that naloxone be made accessible to bystanders due to the spike in opioid overdoses nationwide. The center received approximately $11,000 from the college’s Facilities Planning Committee to purchase the first-aid kits.

The naloxone from the AED kits and the red first-aid boxes has not been used, Ryan said.

There were 18 opioid overdose-related deaths in Tompkins County in 2017, according to the New York State County Opioid Quarterly Report. Naloxone was administered by emergency medical services in Tompkins County on 98 occasions in 2017 and 74 times in 2018.

The Southern Tier Aids Program (STAP), located in downtown Ithaca, ran six workshops on how to use naloxone and on opioid prevention during the 2018–19 academic year. Between 15–45 members of the campus community attended each of the workshops. Four workshops will be held this semester and will be free of cost, Reynolds said. After the training, individuals can receive a personal naloxone kit.

Reynolds said that information regarding the naloxone kits was shared with residential life staff, who then shared it with resident assistants.

RAs are not required to attend the STAP workshops, but they are encouraged. Sophomore RA Alyssa Carbonell said she did not receive much information regarding the naloxone.

“They did mention that if we were interested that we could attend those workshops so that we can get trained on it and get our own personal Narcan kit, but it’s not really required,” Carbonell said. “We had questions about whether we were going to get trained in it, but there’s no answer yet about it.”

Junior RA Aidan DeBolt said that he is certified to administer naloxone but only because he had a lifeguarding job. He said he was surprised that residential life did not provide more information on this medication to RAs.

DeBolt said he thinks the naloxone kits can bring awareness to the issue of opioids usage.

“I think it’s really smart to have these stations all over campus because you never know when someone needs it,” DeBolt said.