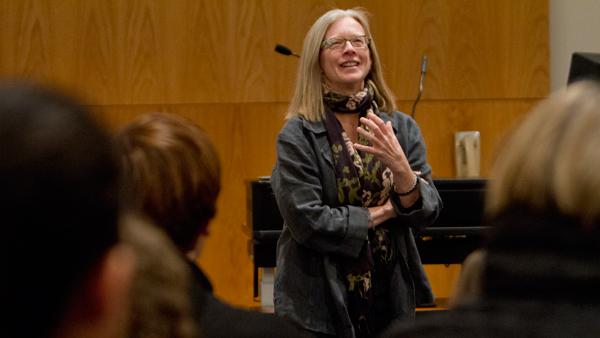 In her 35 years as a photographer, Lynn Johnson has captured moments of the lives of hundreds of people. On Feb. 21, Johnson visited Ithaca College and spoke to students about her experience traveling the world and working for publications like National Geographic, LIFE Magazine and Sports Illustrated. She has covered topics as diverse as the living conditions of Tibetan citizens living under Chinese rule to the children’s TV series Mister Rogers’ Neighborhood.

Staff Writer Evin Billington spoke with Johnson about her career and life behind a camera.

Evin Billington: What has been the best part of your career?

Lynn Johnson: I get to learn about a new subject and see the world and share that with the reader. All of those things are what keep this profession, for me, alive and exciting. It’s not like I’m going on vacation when I go to work. Some of the places I go can be very tough to be in, and there’s occasional danger and always the possibility of getting sick and the complication of figuring out various assignments and working with other people that are from some other cultures. I think that’s what keeps it interesting for me.

EB: What types of risky situations have you found yourself in?

LJ: Some military guy tried to stuff me in a car in Nigeria, that was years ago. I’ve been attacked by a man in Iran who thought I had photographed his wife uncovered, which I didn’t. It’s usually a very personal threat. I don’t cover conflict. The world can be a dangerous place, and people are weird, and there are a lot of drugs out there … When I go to another country, I’m working with an interpreter, so I have to make sure that that relationship is really strong and that I trust that person, because my well-being may be dependent on that.

EB: Is it ever difficult to continue doing your job when faced with such heart-wrenching and sometimes dangerous conditions?

EB: How personal do you get with your subjects?

LJ: It’s very intense, and it’s very personal. Do I become friends with them? No, I don’t. I think you share [a] professional goal. For storytelling, it is really a collaboration. I can’t just take your photograph. The best and most powerful photographs from my point of view are photographs that are given to the reader. I just am the conduit. I want [the subjects] to make a decision to collaborate and share their lives to readers. That’s a very special relationship, because it’s not a friendship … It’s important I think to always have this professional clarity about what the relationship is.

EB: Out of the thousands of pictures you have taken over the years, have any resonated or stuck with you more than others?

LJ: I’ve been shooting for 35 years, so there are a lot of photographs that stick with me and a lot of powerful memories that will just float up in the middle of the grocery store … I recently did a story for [National] Geographic about languages that are vanishing. Languages are actually disappearing at a more rapid rate than species disappearance … and so I met some of the last speakers of languages, especially in this country, some of the Native American languages. It was very powerful to meet this one gentleman named Johnny Hill who was the last speaker of the Chemehuevi language. I think there’s a loneliness in him … That’s a kind of unique position to be in, so being with him was very powerful.