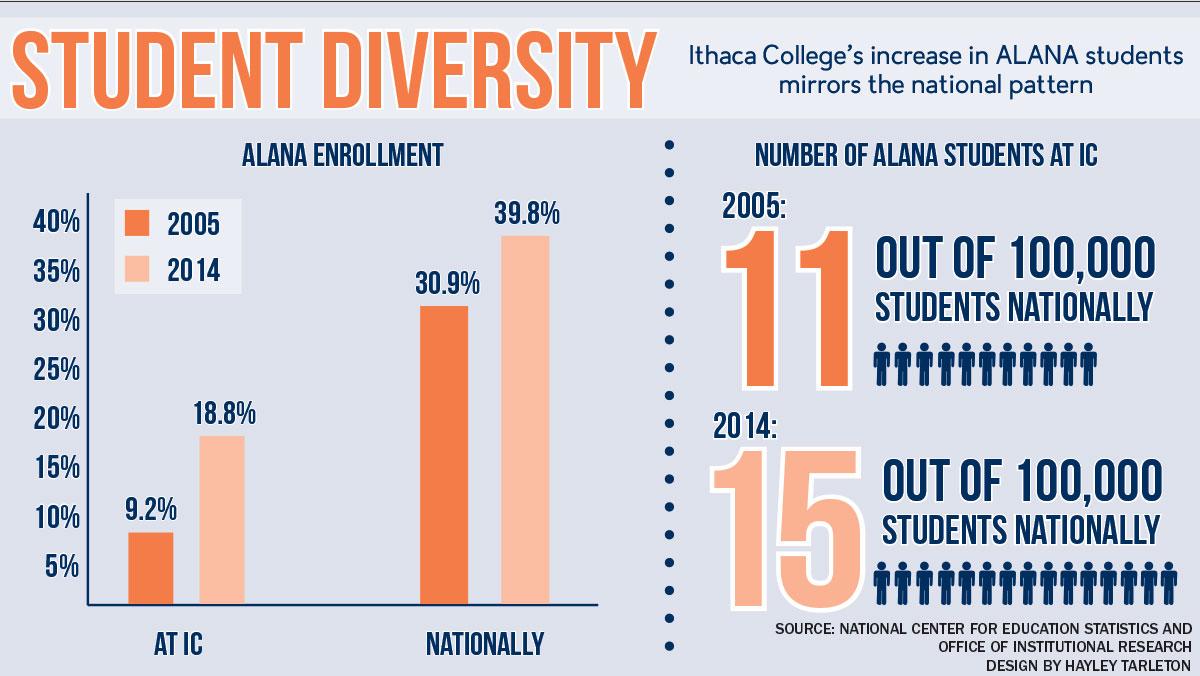 Design by Ali Teadore/The Ithacan
Ithaca College has steadily increased its number of minority students at a rate comparable to the national average. However, among its peer group of institutions, the college still lags behind.
By Max Denning — Staff Writer
Published: November 2, 2016

Six years after the implementation of the Diversity Strategic Plan, Ithaca College has steadily increased its number of minority students at a rate comparable to the national average. However, among its peer group of institutions, the college still lags behind.

Among the 11 schools in its peer group, the college ranks eighth in terms of diversity of its first-time, full-time freshman class in 2015, with 22 percent of students identifying as African, Latino, Asian or Native American. The peer group is released in the college’s annual budget and consists of the institutions that have the most overlapping applicant pools with the college. 2015 is the most recent year for which comparative statistics are available.

“Do I think IC is diverse enough?” Turbide said. “The answer is no. Have we made good progress? Yes, absolutely.”

The college’s diversity figures have progressed at nearly the same rate as the increase in diversity of the national pool of college students. From 2005 to 2014, nationally, the total college enrollment of ALANA students increased by 8.9 percent, according to the National Center for Education Statistics. The college increased its proportion of ALANA students by 9.6 percent in this period, according to the Office of Institutional Research. This means the college’s progress is less than a 1 percent increase ahead of the national student population shift.

The college’s admissions process is race neutral, meaning an applicant’s race is known, should the applicant choose to disclose it, but not considered as a factor in deciding to admit the student, Turbide said. Instead, he said, the college’s efforts to increase the diversity of new classes of students are based on recruitment strategies. The college takes into account the diversity of the schools and cities it chooses to visit, Turbide said. In addition, the college has merit-based scholarships such as the MLK Scholar program and ALANA scholarships specifically for students from underrepresented backgrounds.

At Hofstra University, a member of the college’s peer group where the freshman class in 2015 included 37 percent ALANA students, there is a program similar to the MLK Scholar program, but it is more intensive. The New Opportunities at Hofstra Program provides “academic, financial and social support resources for students from lower-socioeconomic backgrounds,” which includes a five-week Pre-Freshman Summer Academy that allows students to begin earning college credits early and “become acclimated to Hofstra University.” In addition, Hofstra annually offers two full-ride scholarships to women from East Africa, as well as full-ride scholarships to the valedictorians of Uniondale and Hempstead High Schools, where white students make up 1 percent or less of the student population.

To increase student diversity, Turbide said, the college has focused on creating a more inclusive environment on campus rather than merely increasing the percentage of students of color. The college’s racial climate was one of the key issues that POC at IC protested last year during the fall semester, echoing protests that erupted on college campuses around the country.

Before 2015, the racial climate at the college was already under scrutiny. In the 2011 campus–climate survey, 56 percent of ALANA respondents said they thought that people at the college do not receive equal treatment, compared to 39 percent of white respondents. Nicole Eversley Bradwell, director of admissions, said she recognized that inclusivity has been an issue at the college.

“We see a lot more evidence that our current students and alumni can share that they haven’t felt like this has been the most inclusive environment,” she said.

“I think that Ithaca College should start gearing its focus on inclusion for students of color,” she said. “A lot of the programming that we already have, which I guess would fall under diversity, it’s broken. … We flaunt diversity, but there’s not a push for inclusion.”

Eversley Bradwell said she thinks inclusivity is an issue at most colleges around the country.

Senior Yaw Aidoo, a computer science major and an international student from Ghana, said he agreed that inclusion is an issue at a number of institutions, but that doesn’t excuse the climate at the college.

“It’s certainly a problem across higher education,” he said. “But I think when you begin to think like that … you don’t really solve the issue.”

Last year, POC at IC protested at the college’s Fall Open House Oct. 24. The organization said it hoped to inform “potential customers” of the college what the racial climate of the college was like. Protesters interrupted tours by giving speeches to potential students, highlighting their experiences as ALANA students. Protests later in the semester also made national news, appearing in outlets such as CNN and The New York Times.

Turbide said he didn’t believe the protests had an impact on admissions.

“I don’t have evidence to say that student protest activity negatively impacted enrollment of our incoming students,” he said. “For some visiting students on our campus — for some families — they may have been surprised and had a negative experience. For other families, it felt like what should be going on on a college campus.”

Another factor that dictates the college’s success in attracting diverse students is the location of the college. A number of the schools in the college’s peer group are in or less than an hour away from a large city, including Boston University, Emerson College, Fordham University, New York University and Northeastern University. Turbide said it is much easier for urban schools to recruit ALANA students.

Among the other schools in the college’s peer group that have more non-metropolitan campuses — Cornell University, Hofstra University, Marist University, Syracuse University and Quinnipiac University — the college ranks fourth for freshman class diversity, still among the bottom half of the pool in terms of student diversity.

Aidoo said he doesn’t think location is a big factor in dictating the college’s diversity — it’s how the school is portrayed.

When he was in high school, he said, he met an Ithaca College student who persuaded him to attend the college. Now, he said he’s not sure if he would do the same.

“If I go home to Ghana now and my mom’s sister asks me, ‘Hey, my son is considering going to college. Do you recommend Ithaca?’ … I don’t know if I can promise someone’s kid to come here.”