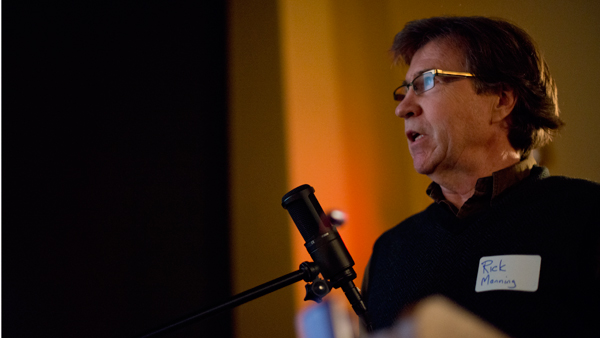 Downtown Ithaca’s Cinemapolis movie theater was transformed into lecture halls and information booths for the fifth annual Ithaca Native Landscape Symposium on Friday and Saturday, which attracted landscapers and horticulture enthusiasts from across New York state.

The event consisted of lectures on landscape architecture, gardening, conservation, climate change and fracking. After outgrowing two previous locations, about 125 people attended for this second symposium at Cinemapolis. Merchandise and informational books were displayed on tables in the main lobby, with each screening room turned into a lecture hall.

Dan Segal, director of the event, said he was satisfied with the turnout, which was slightly less than last year’s 140 attendees.

“It was about what we had expected,” Segal said. “This is probably the biggest [event] of its kind. It’s the biggest native plants symposium in the state of New York.”

Most of the lectures were geared toward the preservation and reintroduction of native plants into Central New York. The symposium was established to spread awareness about the conservation and importance of native plants, because they benefit wildlife and the environment by decreasing the use of foreign, invasive plants. According to Habitat Gardening in Central New York, some native plants include the red oak tree, sugar maple, wild geranium and various berry plants.

Kelly Cox-Brady, a landscape designer at the Plantsmen Nursery in Ithaca, said native plants are essential to native wildlife.

Native plants also keep deer away, Cox-Brady said, which could prevent deer from trespassing onto private property, which is an issue in many areas.

A lecture on fracking was also on the agenda. Formally known as hydraulic fracturing, fracking is a form of natural gas extraction. Recently, Gov. Andrew Cuomo laid out a plan limiting fracking to 40 wells in New York state.

“Fracking is environmentally damaging and is bad for water and birds,” Cox-Brady said. “Personally, I’d like to see it go.”

A lecture on the importance and protection of birds focused on the significance of wetlands. First-time speaker Chris Lajewski, education manager at the Montezuma Audubon Center, talked about birdlife dependency on natural lands and native plants.

“It’s my job to create and provide programs to educate people of all ages on birds and the restoration of their natural habitat,” Lajewski said.

With the diverse agenda, some professionals were able to have an educational experience that related to their field more indirectly. It was Saratoga Springs landscape architect Mike Ingersoll’s first time attending the symposium. He attended with a colleague and said the event not only helped him keep his professional license but also gave him more knowledge for when he’s working in the field.

“This is pertinent to our job, and we need to get a certain number of credits to keep our licenses,” Ingersoll said.  “But it’s a good program.”

Though the lectures have different focuses and branch off of the native landscape umbrella of the symposium, Segal said everything can be connected back to native plants. This is why the symposium is such a draw, he said, because of the different topics discussed.

“We’re trying to make sure that native plants remain central to ideas of sustainable landscaping,” Segal said. “That’s what our mission is.”