Elias Olsen/ The Ithacan
Ithaca College Natural Lands staff runs three deer exclosure projects in the Natural Lands that help staff see how commonly overeaten vegetation will exist without the presence of deer. They are currently developing a plan to advocate for deer control on college grounds based on the impact the deer have on the ecosystem.
By Tessie Devlin — Contributing Writer
Published: November 8, 2017

Ithaca College Natural Lands staff is currently developing a plan to advocate for deer control on college grounds based on the impact deer have on the forest ecosystem that they are tracking through deer exclosure projects.

Jake Brenner, associate professor in the Department of Environmental Studies and Sciences, said he is hoping to provide visual evidence about how deer are altering the species composition and removing certain plants from the ecosystem. With this evidence, he said, he plans to present a case to the administration to allow for forms of deer control on college grounds. Brenner said the college has not considered deer control in the past, and that it is too early to determine the cost of these projects.

He said his project can provide data to aid legislative policy–making in New York State that determines areas where regulated hunting can occur.

Currently, the college is not included in the designated areas where the Department of Environmental Conservation of New York allows controlled hunting of deer in Tompkins County. The most effective form of control is regulated hunting of large herds, but Brenner said this is difficult because of the number of students on campus throughout the year.

Cornell University is able to conduct controlled hunting on their property through their Integrated Deer Research and Management program, which relies on donations and volunteers to run it. According to Cornell’s Botanical Gardens website, they control the deer population to preserve and increase the well-being of the forest. 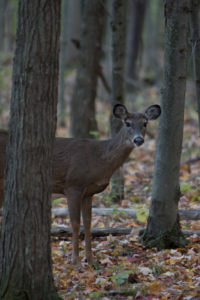 Jake Brenner, associate professor in the Department of Environmental Studies and Sciences, is working with the Natural Lands staff to advocate for regulated deer control on campus. (Elias Olsen/ The Ithacan)

The implementation of this form of deer control depends on factors like what the land is used for and if firearms are permitted. Todd Bittner, director of Cornell University Natural Areas, said. Bittner said that assessing how Lyme disease occurrences relate to the population of deer is a key interest in Cornell’s program, but more funding is necessary for Cornell’s study. Cornell Health at Cornell University said they were unable to release the information of the number of Lyme disease cases. However, at Ithaca College over the past five years, Hammond Health Center has had 41 patients diagnosed with Lyme disease and 79 patients with tick bites, Vivian Lorenzo, director of medical services, said.

About 700 to 1,000 hunters have the opportunity to hunt deer by passing an online test about the rules and regulations before applying for a permit, Bittner said. These hunters have specific rules about where they can and cannot hunt using bows or firearms, including boundaries within the City of Ithaca, according to the website.

This causes a higher population of deer to migrate to the college’s campus because the deer adapt and learn to go where they are not being hunted, Brenner said. Trying a different approach to deer control, like fencing the entire natural lands and sterilization, is too expensive and impractical, he said.

Brenner said that collecting and presenting this data is for educational purposes and that he is not yet sure what policy options could come from it yet. Although he said he does hope it sparks a change in policy, the options for what it could be are not available.

The college currently runs three deer exclosure projects in the Natural Lands that help staff see how commonly overeaten vegetation will exist without the presence of deer, Brenner said. They consist of fenced off areas measuring 50 by 450 feet in the South Hill Natural Area that will exclude deer. He and his students work closely with the Office of Facilities to measure the difference within and outside the enclosure to see the deer’s impact.

The original goal of these exclosure projects was to regenerate the vegetation that has been overeaten, such as sugar maple seedlings. In the Natural Lands, deer have eaten tree seedlings on the forest understory, which prevents seedlings from replacing the dying trees, ultimately killing the forest, Brenner said. He said that it is like an older generation not having any children.

“It doesn’t look good for the future, although everything kind of looks good right now,” Brenner said.

Wildlife causes minimal effects on other areas of campus. Deer, groundhogs and geese roam the college’s campus for many reasons, including escaping natural predators and seeking new sources of food. Jason Hamilton, chair of the Department of Environmental Studies and Science, said most of the food is from plants and other organisms. If there is something left over from human consumption, animals might smell it, even if it is disposed of in garbage containers.

These animals are not a hazard to students on campus and do not view humans as a threat. Most of the animals are simply opportunistic and feed on what is available, he said.