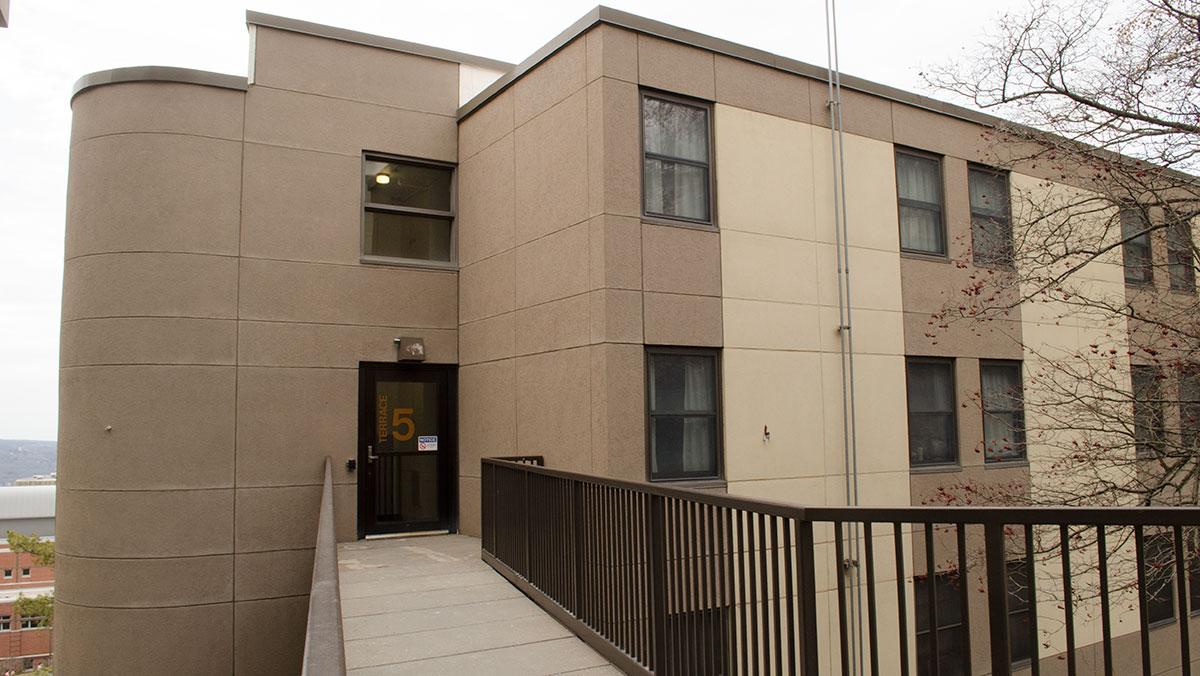 Elena Haskins/The Ithacan
It is not decided where the African Diaspora learning community will be housed on campus, but other learning communities exist in the Terrace dorms, pictured above.
By Ben Kaplan — Contributing Writer
Published: November 7, 2016

A student-led effort may bring an African Diaspora–themed residential learning community to Ithaca College by next year.

This community would be open to any student who identifies as a part of the African Diaspora or considers themselves an ally of the group. This would encompass anyone with lineage from Africa and certain parts of South America whose ancestors were brought to the Western Hemisphere, said Darnell Thompson, residence director for Emerson Hall and the Garden Apartments, and one of the advisers for the proposed community. A residential learning community allows a group of students who share similar identities or interests to house as a group in designated housing.

Currently, Thompson said, the group has completed a majority of the application process and is now waiting for the budget for the community to be approved, a process that will take at least a few months before it can move forward with promoting the community. He said the group is proposing to house it in Emerson Hall.

The idea for the community stems from student requests. Thompson said he was approached last year by students who wanted to see if it was possible to create a space students of the Diaspora could call their own.

“We had plenty of conversations regarding needing more support for students of color here at Ithaca in general,” Thompson said. “This would be one particular aspect of that: creating a learning community where these students can have a space where folks look like them and have events that focus on their growth and their development.”

Thompson said he thinks the college has long been overdue for a community like this because even though a trend toward inclusivity exists, racial inequality is still frequent in higher education.

“Too many times we hear stories of marginalization, tokenization and outright racism happening in and outside the classroom,” Thompson said. “Education happens with each other, not at one another, and folks can come together and show strength in a place like this.”

As an African American, sophomore Shinice Ford said she would appreciate having the community on campus.

“I think we need a community like this because there are a sparse amount of African Americans here on campus, and I feel like it would bring us all together,” Ford said. “Latinos have their own community, so it would just be nice to have one for African Americans and have a safe space where similar people can gather and build more relationships.”

Sophomore Isaiah Horton, a resident assistant in West Tower, said because the African Diaspora community has low numbers at the college, a culturally themed community would be a good step toward helping people of color feel safe on campus.

“Diversity is something we’ve struggled with here at the college in recent years,” Horton said. “So trying to build that community and make it stronger within itself is a very good idea.”

If accepted, the community would be added to the 10 other themed living spaces the college already offers. Jacqueline Winslow, assistant director for residential education, said the college is receptive to new living community ideas and that the Office of Residential Life considers any community requests brought to them by students. Current communities range in theme from practicing sustainability to substance-free living.

To have their prospective community become official, students must fill out an application form found on OrgSync where they must outline goals and activity plans, as well as declare a faculty adviser for their living community. According to the OrgSync application, there must be at least 12 students committed to participating and living in a prospective RLC.

Thompson said his role as an adviser is to work closely with the students to create an outline that properly reflects their goal of making a community that is, according to their official mission statement, “thriving, supportive and educational for students who seek to strengthen their knowledge and empowerment of the African Diaspora.”