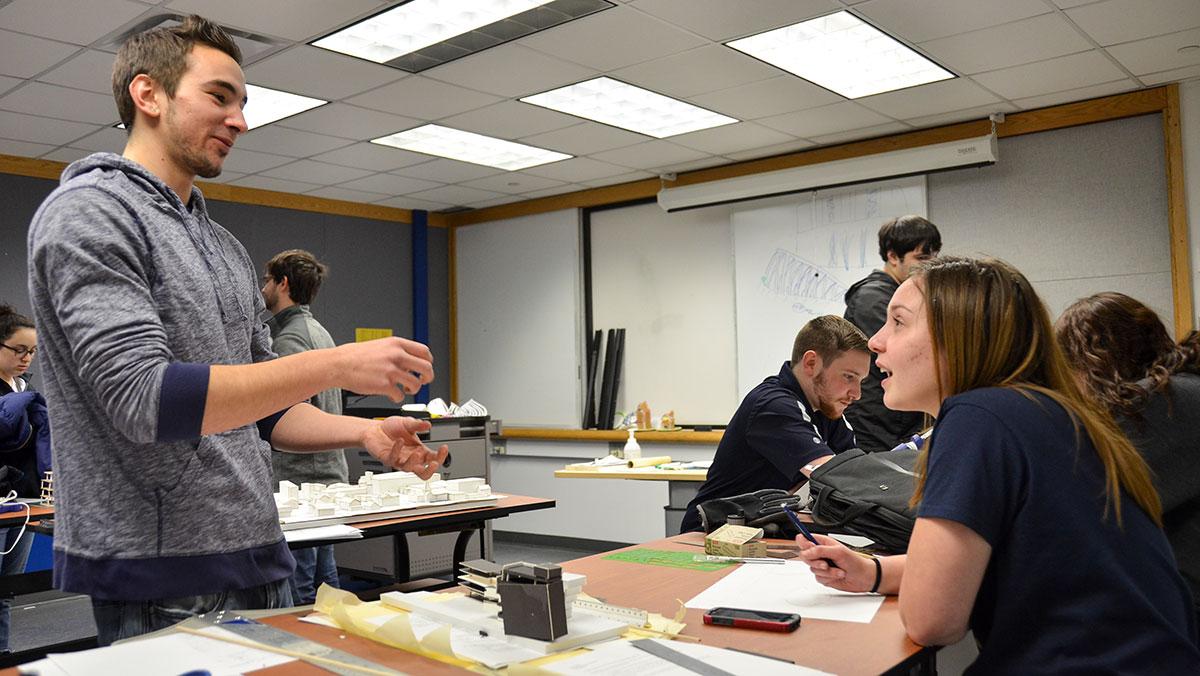 One of Ithaca College’s smallest academic cohorts now has a recognized club to represent their interests.

The Ithaca College Architecture Club was officially recognized as a student organization for Spring 2015. Junior architectural studies majors Danny Polgreen and Michael Rizk informally created the club in the fall of 2014 as a small circle of friends because they felt there was not a sense of community within their program, which consists of 20 students according to Julia Yang, administrative assistant for the Departments of Anthropology and of Art History. Rizk said the actual idea to begin the club came up very casually.

“One day we were just in our studio class, and [Polgreen] was wondering what was a good outlet to get architecture students together, and he asked me if I would help him out to get this club started to form a better community,” Rizk said.

Students in the club meet at least once a week to do activities ranging from redesigning dorm rooms to taking field trips to local art museums and architecture firms to see what a day in the life of an actual architect consists of. Lauren O’Connell, the coordinator of the architectural studies program and professor of art history, serves as academic adviser for the club. She said she was impressed with the drive by students to found the club.

“The folks who started it and the ones who are in it have a lot of initiative and they will just come to me saying, ‘We’re interested in doing such and such, what will be the procedure?’” she said. “If money were no object, I’d love to see a dedicated studio space, with all the shop equipment they need to make all the nice models and would really showcase to the outside world the kind of work that goes on.”

For Polgreen, creating the club and being a part of the program has been a no-brainer, he said.

The architectural studies major is a four-year program that was founded in 2012 under the Department of Art History. According to the program’s website, it draws upon a wide array of liberal arts courses, as well as others offered by the department. After receiving a Bachelor of Arts degree in architectural studies through the program, students must obtain a master’s in architecture before they qualify to officially practice in the field.

“This makes up probably 90 percent of my social life,” he said. “It was a small club back then, we weren’t even official … now we’re much better than that.”

With the club now officially recognized, its doors have been opened to all members of the campus community. It has seen its numbers grow from just around seven members before it became official, to a group of about 15 members from several majors this semester.

Junior Lauren Infantino, an occupational therapy major, said she got connected with the club when one of her friends who was in it recommended joining for a chance to unwind. She said she came into the club with little knowledge of the major or club.

“I didn’t even know we had an architecture major on campus,” she said. “I went into the architecture club not knowing what anything was, so by doing more of the activities, I thought I might as well gain something from it,” she said.

Infantino pointed out that her lack of previous architecture experience has not stopped her from trying to learn and have fun.

“No one’s judged me for my drawing,” she said. “You can use your imagination. I put a lot of silly things in my drawing.”

Junior Kyle James, vice president of communications for the Student Government Association and an integrated marketing communications major, said he had a similar experience when joining because he did not already know the crowd there.

“I had a couple friends here, but I came in as a fairly good stranger,” he said. “Since then I’ve made good friends; we hang out on the weekend. At first I was a little intimidated, but after the first meeting, those fears were put away.”

For the architecture majors, Jurasinski said bringing together this club gave them what they have felt has been lacking: a community.

“We don’t have alumni like [the School of Music] does or the [Roy H. Park School of Communications,]” he said. “This group creates a community that is desperately needed.”

For Rizk, who serves as the club’s co-chair and will be a part of the first class to graduate from the four-year architectural studies program, the community that has formed through the club has led him to take pride in the small program.

“It makes me feel kind of unique,” he said. “We are a minority.”

The club meets at 7:30 p.m. every Tuesday in Hill Center, Room G01. Students who are interested can email co-chair Danny Polgreen at dpolgre1@ithaca.edu for more information.