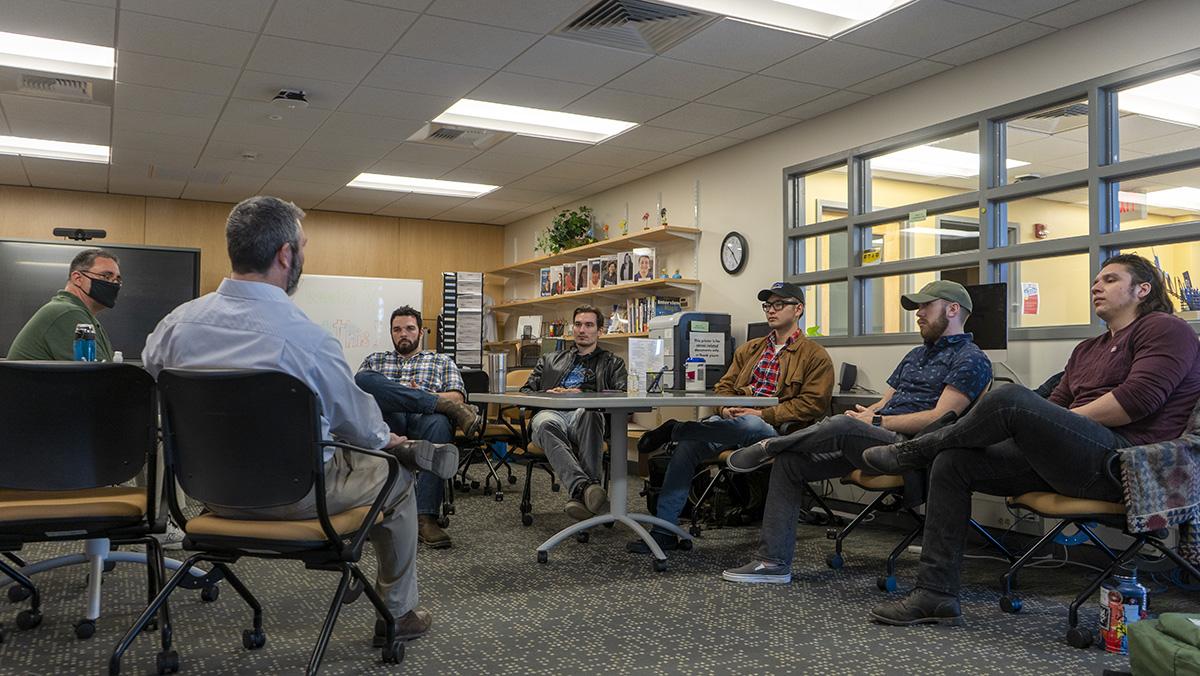 Kevin Yu/The Ithacan
As president of the college’s student chapter of SVA, a club that was officially recognized by the college in Spring 2022, Hinojosa said he hopes to bridge the gap between student-veterans and non-veteran students, partly by hosting events — like movie nights and book clubs — that would help veterans integrate into college and non-military life.
By Elizabeth Kharabadze — Staff Writer
Published: March 23, 2022

After leaving the Marines in 2021, freshman Jose Hinojosa decided to enroll at Ithaca College to pursue film. Yet, there were hardly any resources aimed toward supporting his experience as a veteran and as a non-traditional student. To help bring these resources to the college, he started a Student Veterans of America (SVA) chapter at the college.

As president of the college’s student chapter of SVA, a club that was officially recognized by the college in Spring 2022, Hinojosa said he hopes to bridge the gap between student-veterans and non-veteran students, partly by hosting events — like movie nights and book clubs — that would help veterans integrate into college and non-military life.

“A lot of people at college have zero experience with the military,” Hinojosa said. “There used to be a much bigger percentage decades ago, … but it seems like at college, there’s a very small amount of traditional students that are in any way related to the military. So to see us just as normal people and just be more present on campus, I think would be very useful.”

Hinojosa also said the living stipend the GI Bill provides has been one of his main areas of concern. The bill provides benefits for all veterans and active-duty members of the military looking to receive an education. It aids in paying tuition fees, housing, textbooks and supplies for college, graduate school and training programs. Under the Post-9/11 GI Bill, a veteran or active service member can receive benefits after 90 days of service if they served on or after Sept. 11, 2001.

Basic Allowance for Housing (BAH), is a monthly allowance paid to eligible service members when government housing is not available, is regulated based on ZIP code. The stipend, Hinojosa said, is often not reflective of the cost of living at the college — with the cost of tuition for the upcoming 2022–23 academic year at $48,126 and room and board at $15,934.

“The only really financially viable way to go to school and college as a veteran is either you live here … or your family lives here,” Hinojosa said. “It’s really nothing IC can do unless it wants to step forward and either heavily reduce housing [on campus] for veterans or they give us higher stipends independent of the GI Bill.”

According to the U.S. Department of Veterans Affairs, up to $26,042 can be covered for the 2022–23 academic year for a private institution under the Post-9/11 GI Bill at the 100% eligibility tier. Eligibility tiers are determined by how long a service member has served in the military, with 100% payment toward those who have served at least 36 months or have been honorably discharged.

Freshman Vincent Kang, veteran and vice president of the SVA, said he was dismayed by the financial limitations BAH posed, which makes focusing on school more difficult for him.

“Ithaca College doesn’t have to figure anything out, it is all just reinventing the wheel,” Kang said. “They have literally hundreds of colleges with proven effective means. It’s just whether an administration wants to step forward and implement that with time and financial investments.”

Part of the process is listening to the concerns of veteran students. Jacqueline Winslow, director of New Student and Transition Programs, is one of the people working with SVA to provide resources to aid their transition.

“It’s talking to and listening to those students as individuals and understanding [what they need],” Winslow said. “What I’m hoping to build with the help of our current veteran students is some advice and mentorship about what’s most important for incoming student-veterans to know about life in Ithaca and learning at IC.”

Another way the college is working to support veteran students is by achieving a Military Friendly official designation, which would judge the college on its ability to recruit and retain military veterans. The designation would help with outreach to prospective veterans by ensuring the college is welcoming and well-resourced to meet their needs.

Senior Sam Williams originally had the idea to create a club to support veteran students like himself prior to the COVID-19 pandemic. Following the college’s sudden shift to remote learning in Spring 2020 and his own leave of absence for the 2020–21 academic year, Williams came back to find that the club had already been started.

“I know a lot of people have trouble getting here,” Williams said. “Just because of the expense of the area, a veteran coming into school is different than your typical freshman coming out of high school. We just have a few different needs and things we’re looking for.”