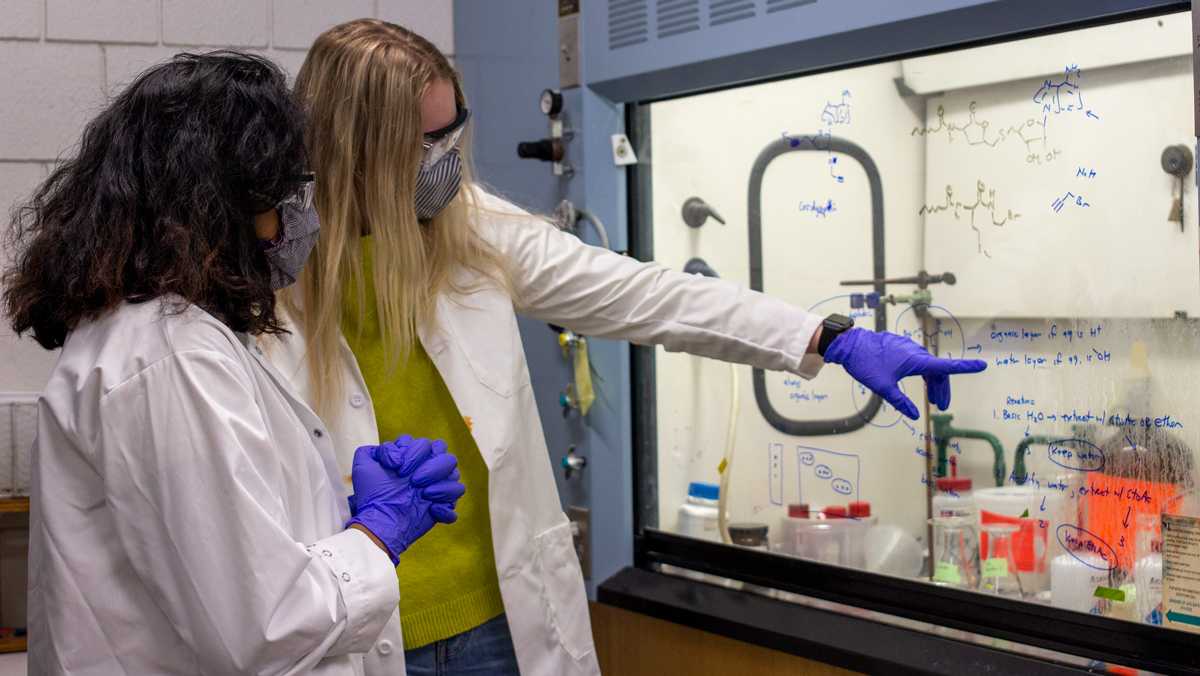 Lexi Danielson/The Ithacan
From left, juniors Paige Ramkissoon, president of IC Women in STEM, and Beth Ryan, vice president, work in a Center for Natural Sciences lab April 26. The recently founded IC Women in STEM club aims to highlight women in the fields of science, technology, engineering and mathematics, as well as raise awareness about forms of discrimination, like sexism, that women face in STEM fields
By Alex Hartzog — Staff Writer
Published: April 29, 2021

It was not until junior Beth Ryan sat in her first class at Ithaca College that she had a professor who identified as a woman in her STEM classes. After 18 years of not having a female-identifying professor, Ryan said she finally felt like she made the right choice applying to a STEM major.

The recently founded IC Women in STEM club aims to highlight women in the fields of science, technology, engineering and mathematics, as well as raise awareness about forms of discrimination, like sexism, that women face in STEM fields, club president junior Paige Ramkissoon said. According to the Society of Women Engineers, women represented approximately 21% of STEM bachelor’s degrees in the 2017–18 academic year.

Ramkissoon founded the club with Ryan, the vice president, and senior Viviana Perez, the secretary. This is a new incarnation of the club, as the previous IC Women in STEM club was not active on campus when Ramkissoon was a freshman.

“If we show that there are women out there that are doing amazing things in STEM, hopefully it will inspire more diverse populations to stay in the field,” Ryan said. “It is possible to succeed.”

Ramkissoon said the Office of Student Engagement formally recognized the club in March 2021. The executive board does not yet have any events planned but looks forward to hosting events like interdisciplinary study sessions, webinars and other learning opportunities.

The executive board hopes to host these events in Fall 2021, Ramkissoon said. Ramkissoon said that she wants to cultivate a community of people in STEM majors that can celebrate achievements in STEM with each other.

“I remember when the last Nobel Prize winners were announced, I really wanted a space to nerd out with a bunch of people,” Ramkissoon said.

In addition to focusing on women in STEM, the club also aims to support other minority groups within STEM fields, Ryan said. Ramkissoon said the intersections among race, gender and sexual orientation are incredibly important to her as a woman of color.

Te-Wen Lo, associate professor in the Department of Biology, said that Ramkissoon approached her in November 2020 and was excited to become a mentor for the club. Lo said that the club is focused on women in STEM, but that conversations about discrimination cannot be limited to a single topic or perspective.

“I think discrimination is non-discriminating,” Lo said. “There are a lot of shared challenges across all of the STEM fields, and I think within this group of women that will be a part of this community, I can’t imagine there won’t be conversations about other types of discrimination.”

Ramkissoon said that Lo was one of the first professors on campus who made her feel like she belonged in a STEM major, as Ramkissoon saw a bit of herself in Lo.

“I never had a science teacher that was a person of color until I came to college,” Ramkissoon said. “I just remember Te-Wen walking into the classroom and being like, “Hi, I’m Te-Wen,’ and I was like, ‘Oh my gosh, I feel comfortable here.’”

“When you picture a scientist, you typically picture a male, and I think this [club] would be the best way to launch that platform, by getting behind women in STEM,” Ryan said. “From there, we can kind of back other minority presences in STEM fields because even though women are typically the minority, women of color represent an even smaller population of active contributors to scientific research.”

Ryan said that she hopes the club will also be able to form an intercollegiate network of other women in STEM clubs across the country to facilitate learning and start conversations about struggles in the STEM field.