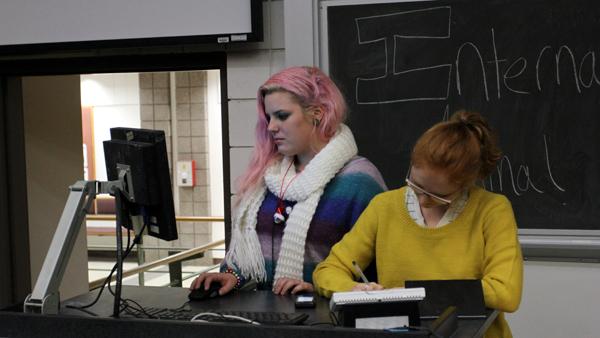 A group of Ithaca College students have formed a new club on campus, IC Animal Rights, to tackle issues concerning animal rights through campaigns and by holding instructive events on campus.

The club, which has 10 regular members, has begun an online photo campaign against animal cruelty and held a screening of “March of the Penguins” in Williams Hall on Monday. The organization hopes to raise funds for the protection of animals in establishments such as the Farm Sanctuary in Watkins Glen and raise awareness of animal rights to the student body.

“We started late in the game, so we don’t have much of a campus presence yet, but we’re hoping that by raising awareness for animal rights, we get more visibility,” Miller said.

In addition to the film screening Monday, the group also launched its Voice for the Voiceless Campaign, in which students held up informational posters in support of animal welfare. Photos were taken two weeks ago and uploaded to Facebook on Sunday in support of International Animal Rights Day.

The posters included messages of what an animal might want to say but can’t, Miller said.

Sophomore Dorothea Hinman, the group’s treasurer, said that while the college had student groups like Puppy Love, a group that works with the Tompkins County Society for the Protection of Cruelty to Animals to help animals in need, as well as raising money for the shelter, there was no club that promoted the well-being of all animals, which she said the campus should be receptive to.

“We’re about all the animals, so we wanted to cater to that crowd,” Hinman said. “There was not a previous animal rights club on campus, which we found strange because it’s a liberal arts campus. We thought it was necessary to have a club like that.”

According to the Humane Society of the United States, dogs — pit bull breeds in particular — are the most common victims of animal cruelty. Animal abuse is not limited to household pets, however. The HSUS estimates nearly one million animals are abused or killed in connection with domestic violence each year. Farming livestock, like horses, cows, pigs and chickens, are commonly excluded from state laws against animal cruelty.

To support animals more directly, IC Animal Rights worked this semester to raise money for the Farm Sanctuary in Watkins Glen. Hinman said they adopted two animals for the club as well.

“We did meal sign-aways in order to raise money for the Farm Sanctuary in Watkins Glen,” Hinman said. “We were able to adopt a sheep and a turkey. We have full visitation rights, and next semester we’re going to organize trips over there to visit every few weekends.”

Meredith Turner, media relations specialist for Farm Sanctuary, said her organization works to rescue animals suffering from abuse or neglect. They are then taken to one of the sanctuary’s locations in California or New York, where they become “animal ambassadors” who represent their species. Those who choose to adopt these animals provide them with food and health care and can get full visitation rights.

“We can’t rescue every animal from abuse and neglect, but the ones we are able to rescue, we’re able to tell their story, and they become ambassadors for farm animals everywhere,” Turner said. “For a monthly gift or donation they’ll be providing the care for the animal who resides at our sanctuary. It’s an opportunity for someone to make a meaningful difference in the life of one of our formerly abused and neglected farm animals.”

Freshman Teresa Clark, who worked as an educator at the New York Aquarium, said she hopes the environmentally concerned campus comes to understand the connection between animal rights and the larger ecosystem.

“I’ve always been an animal lover,” Clark said. “Animals are a huge part of the environment, ecosystems and everything. What we do impacts them, and it’s only logical to me that a town like this and a campus this environmentally conscious has something supporting animals.”