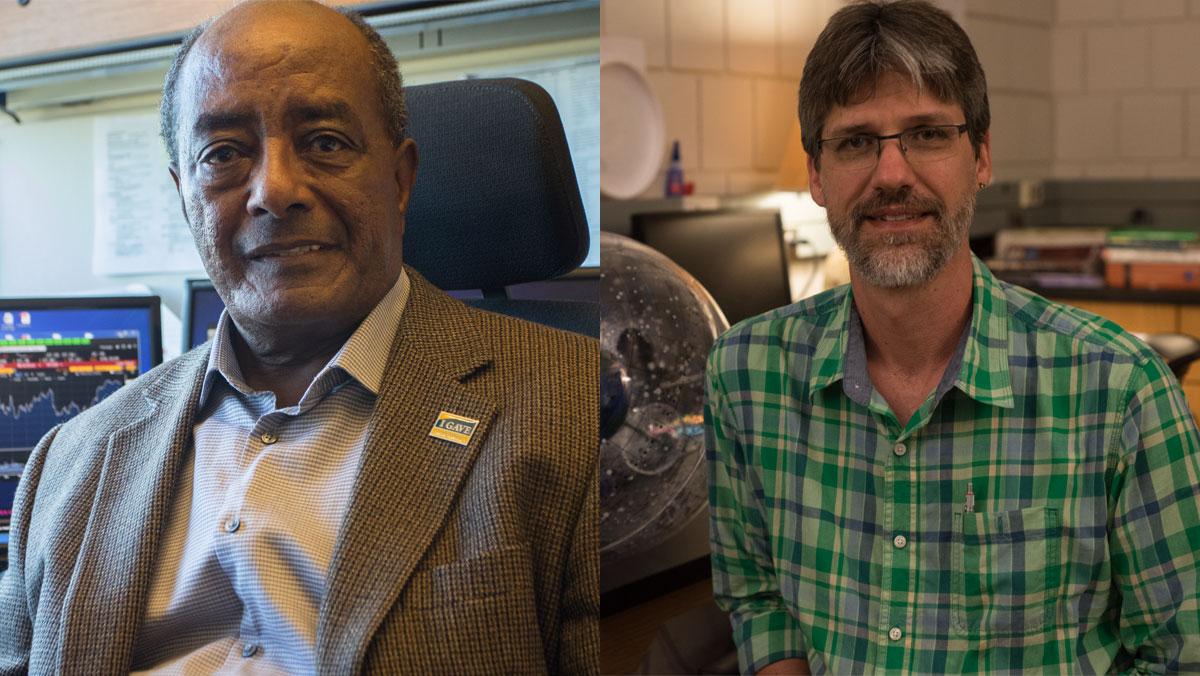 Jade Cardichon/The Ithacan
Two new Ithaca College Dana professors were announced Aug. 30: Abraham Mulugetta, professor of finance and international business, and Luke Keller, professor in the Department of Physics and Astronomy. The two professors are the first to be named since 2008, and follow changes to the professorship program recently approved by the Faculty Council.
By Meaghan McElroy — Contributing Writer
Published: September 6, 2016

Two new Ithaca College Dana professors were announced Aug. 30, after changes were made to the professorship program by the Faculty Council and subsequently approved by the Executive Committee of the Dana Foundation this past February.

Abraham Mulugetta, professor of finance and international business, and Luke Keller, professor in the Department of Physics and Astronomy, were selected as this year’s recipients, the first two Dana professors to be named at the college since 2008.

The Dana Professorship, which is made possible by the Charles A. Dana Foundation, is an application-based award that “recognizes excellence among excellence” within the faculty at the college, according to its website. Whereas the professorship was once given to full professors as a lifetime award, it is now given in five-year terms — and professors can reapply at the end of their term — said Tom Swensen, chair of the Faculty Council and Department of Exercise and Sport Sciences.

Swenson said the changes to the program were proposed because it was losing interest at the college. The changes are an effort to combat that, he said, and bring a renewed energy to the program.

“The Dana program was kind of falling through the cracks,” Swensen said. “Nobody was really looking at it. … This is an endowed professorship, so the college has money in the endowment. … There was some concern from the Dana foundation, and it was kind of a use-it-or-lose-it kind of deal.”

The professorship itself has been under revision by the Faculty Council since last spring, and the changes were passed unanimously at the May 2016 meeting, Swensen said. Despite the new rule dictating five-year terms, previous Dana scholars will be grandfathered in, allowing them to continue their lifetime professorships. He said the new changes are in effect for the first time this year.

Despite these structural changes, the prerequisites remain: The professorship is still offered to full-time professors who have a “continued record of excellence” and show promise in their future work with the college, Swensen said.

“Instead of it necessarily being a reward, it was more of ‘What are your plans for the next couple of years?’” Swensen said. “In this way, the committee and the council can reward professors who are staying active.

Along with the distinction of the professorship, recipients are given a stipend and a three-credit course relief so they may pursue independent projects or continue to deepen their involvement with student activities.

Mulugetta has been involved with the School of Business’ Center for Trading and Analysis of Financial Instruments, otherwise known as the trading room, since its inception. With the relief in his schedule, he plans to continue his involvement with the Trading Room so he can continue to help his students develop a hands-on learning environment.

“A kind of tradition has been created where students really learn not only for themselves, but they create an environment where they learn together,” Mulugetta said.

Keller, the other recipient, said he was honored to receive the award but that it was also nice to see his colleague win the award.

“It was best to see Abraham’s name because he’s done excellent work and he’s been here for a long time,” Keller said.

With the time that he has with the professorship, Keller said he is considering writing a book on what scientists know about the origins of stars and planets. He said he is interested in looking at how experts in other fields look at the origins of the universe.

Though the new changes are in place, the Faculty Council will continue to review the criteria and rules of the professorship every three years.