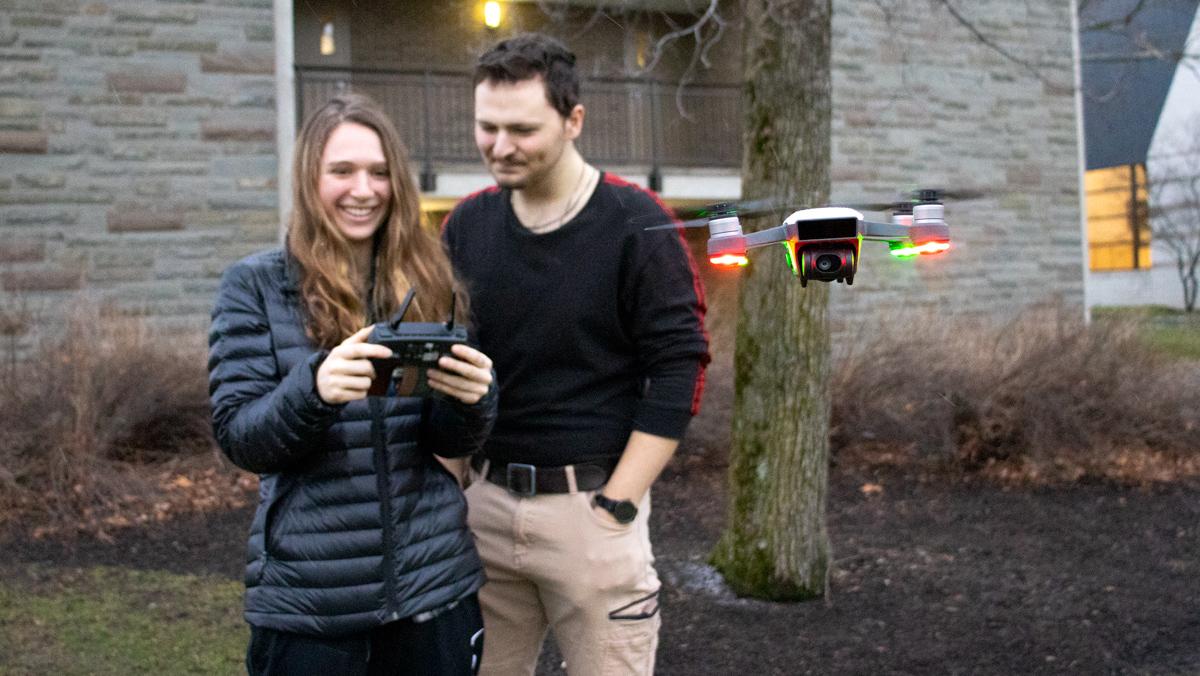 Ithaca College will have a new policy in place by the end of Spring 2020 that requires everyone who flies a drone on campus to have a license and an approved flight plan.

Phil Garin, assistant counsel in the Division of Legal Affairs, said at the Ithaca College Faculty Council meeting Jan. 21 that the college created the policy to address privacy and safety concerns with drone use, like the possibility of a drone hitting a building or person. The policy also gives officers in the Office of Public Safety and Emergency Management a way to enforce drone regulations on campus, he said.

Previously, because the college is on private property, it could restrict drone usage, but there was no policy in place. Garin said the new policy will be in place by the end of Spring 2020 and will be available in the college’s policy manual.

Bryan Roberts, associate dean of the Roy H. Park School of Communications, said the most important part of the policy is the distinction between recreational or hobbyist use and commercial use. The college defines any educational or extracurricular use as commercial use as long as the person flying the drone has a license or is acting under the supervision of someone with a license. A hobbyist is defined as someone who does not have a license. Hobbyists are not allowed to fly drones on the campus.

Roberts said drones cannot fly above 400 feet, and the policy has limitations as to how closely drones can fly to buildings on the college campus.

“The campus community safety is my number one priority, and [the policy] helps us ensure that, so I’m all for it,” Roberts said. “People who know me know I don’t love rules, but some rules you do need, and this will help keep everyone safe.”

Students, faculty, staff and Ithaca community members can get their licenses by taking a free three-day course offered through the college to learn the basics of flying a drone. The college’s drone policy will be discussed during the workshop. Those who have taken the course can go to the Ithaca Tompkins Regional Airport to take an exam and obtain a Remote Pilot Certificate from the Federal Aviation Administration. Roberts said licenses have to be renewed every two years to keep up with changing technologies.

Currently, drones are housed in the Park School. Students, faculty or staff who wish to use them must rent them from the Park School. Flight plans go through Roberts and Alan Schelter, engineer in the Department of Technical Operations. Personal drones cannot be flown on the college campus.

Roberts said he worked with students to start the drone program at the college, a program that has been in place since 2017. He said he looked into the logistics of having drones available for student use.

“There was a Park student who was doing a senior film, and he rented a helicopter and was hanging out of the helicopter to get aerial shots over a swamp in Florida, and I said to myself, ‘There’s got to be a better way,’” Roberts said. “I started looking into drones, and it just seemed like a good fit for what we do here — not just for Park, but it started with Park.”

The Ithaca College Drone Squadron is an organization for both those who have their licenses and those who do not have licenses but wish to learn more about using drones. Members of the organization use drones to capture professional photographs and videos. Those with licenses can supervise those without licenses during a flight, like an adult overseeing a driver with a learner’s permit. The organization can continue to teach students in this way with the policy in place.

“We always operate under extreme caution regardless because it’s a new technology, and it’s unpredictable, and it should be taken seriously,” Galione said. “These are not toys.”

Bill Kerry, director of Public Safety, said the office’s main goal is to help people get their flight plans approved.

“The approach we’d rather see instead of skipping straight to enforcing is actually to educate on the front end,” Kerry said. “It allows us to tangibly show someone or let them know what it is they can do to be approved.”

“It’s good because it allows, if you’re certified to do it, you understand all the rules, regulations and understand what it means to be an approved operator,” Kerry said. “Another thing is, it’s a great opportunity during those workshops, really, for our officers to work with students directly.”

Public Safety does not frequently receive complaints regarding drone usage, Kerry said. He said if anyone is ever concerned about whether a flight is allowed or the location of the flight, they should call Public Safety immediately.

New drone squadron sets its sights on the skies