New drone squadron sets its sights on the skies 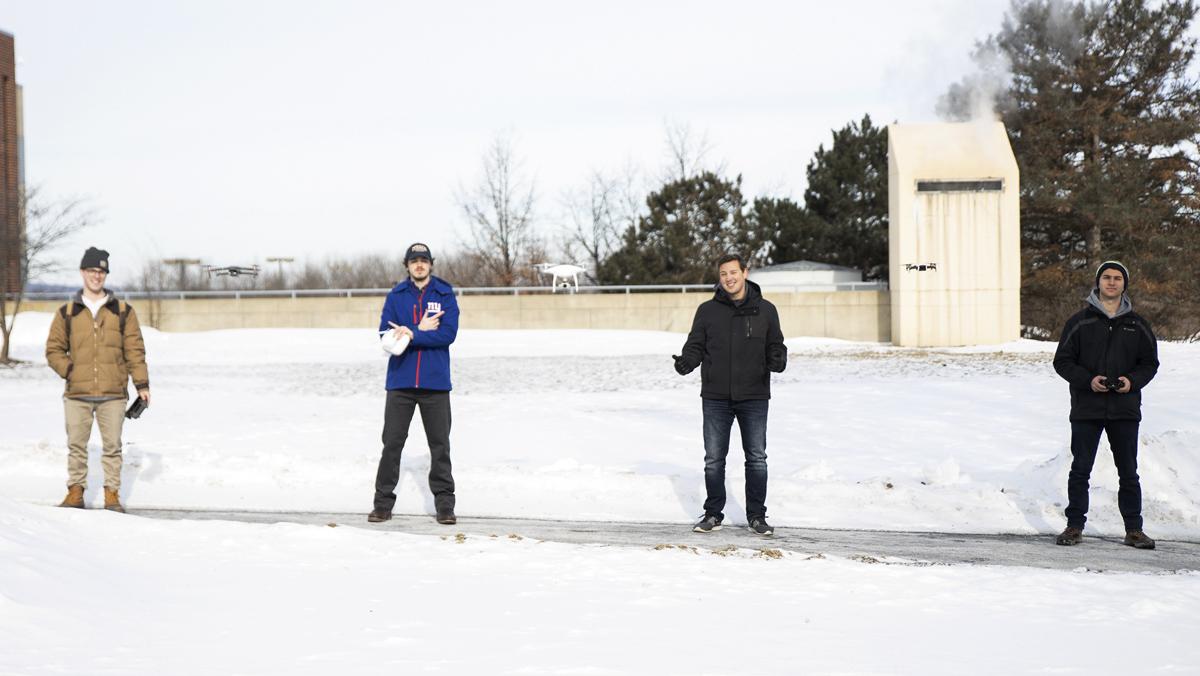 A new student organization, the Ithaca College Drone Squadron, encourages members of the college community to challenge the phrase “The sky is the limit.”

The squadron is made up of 20 students who share a love for drones and the work that can be created with them. The majority of the group met at a series of drone workshops hosted by the college last year, where students, faculty and staff could learn how to fly drones, said sophomore Brandon Galione, president of the squadron. After the workshop, the group communicated in a Facebook group before becoming an organization recognized under IC Engage at the start of Fall 2018.

The squadron wants to provide services for the college and the local community using drones, such as such as videography, photography, and data collection for mapping or thermal imaging, said sophomore Jake Lattimore, vice president of the squadron. Additionally, the club wants to utilize each of its members’ individual skill sets and collaborate with one another on personal projects, classwork and professional drone work. They also want to teach newcomers about drones and supply its members with the resources to work with drones, like equipment and training, said sophomore Brandon Galione, president of the squadron.

At a series of drone workshops hosted last year at the college, attendees could prepare for a licensing test, since drone pilots are required to have a license in accordance with the Federal Aviation Administration. A drone license is not necessary to fly a drone for recreational use, but it is required when flying commercially. Several members of the now official squadron were trained at these workshops, and for many of them, it was their first experience with drones, said senior Nico Johnson, a club member. The group hopes the college will hold more of these workshops in the future to get more individuals involved, Johnson said.

The club also gives its members the opportunity to be compensated for their work, Galione said. If someone needs drone services but are not licensed themselves, they can connect with a pilot directly through the club. Galione said rates of drone work depend on the pilot doing the flying, their level of experience, the equipment used and the extensivity of the job. Although it is dependent on many factors, Galione said the average pilot could make about $500 to $1000 for a simple shoot.

Alan Schelter, an engineer in the Department of Technical Operations and advisor for the squadron, said the need for drone work is increasing, which makes it an opportune time for the group to expand. Although there are a few other freelance pilots in the area, certain skills taught at the Park School, such as shooting and editing, set the IC Drone Squadron apart from other pilots, Schelter said.

“Our pilots have additional skill sets based on their area of study at the college that other pilots in the area won’t have,” Schelter said.

The squadron is currently working on a website that displays its work, bios for each member of the team and a contact page where visitors can book pilots individually. Despite the squadron being a college organization, the work completed by individual pilots is unaffiliated with the school and organization, and only those individual pilots receive payment, Galione said. The squadron serves as a connection between clients and pilots, but does not receive any of the compensation, Galione said.

Lattimore said having drone footage can bring a new perspective to the message of a video and provide a unique overview. Members of the squadron have received compensation for flying drones for weddings, festivals, real estate work and several other events.

While much of the club is made up of experienced, licensed pilots, Lattimore said a few individuals have joined the club with no experience, and about half of the individuals who attended the workshops had not worked with drones. Johnson said the squadron wants to keep the group open to anyone who has an interest in drones.

“Even if you’re not certified and you’re just into drones, we’re trying to gather people to continue to build interest,” Johnson said.

Galione said that while there are many opportunities to gain experience with flying and find work applicable to drones, the main focus of the squadron is the passion for the work it does.

“We want to make cool, amazing content and share it,” Galione said. “That’s what our love is.”