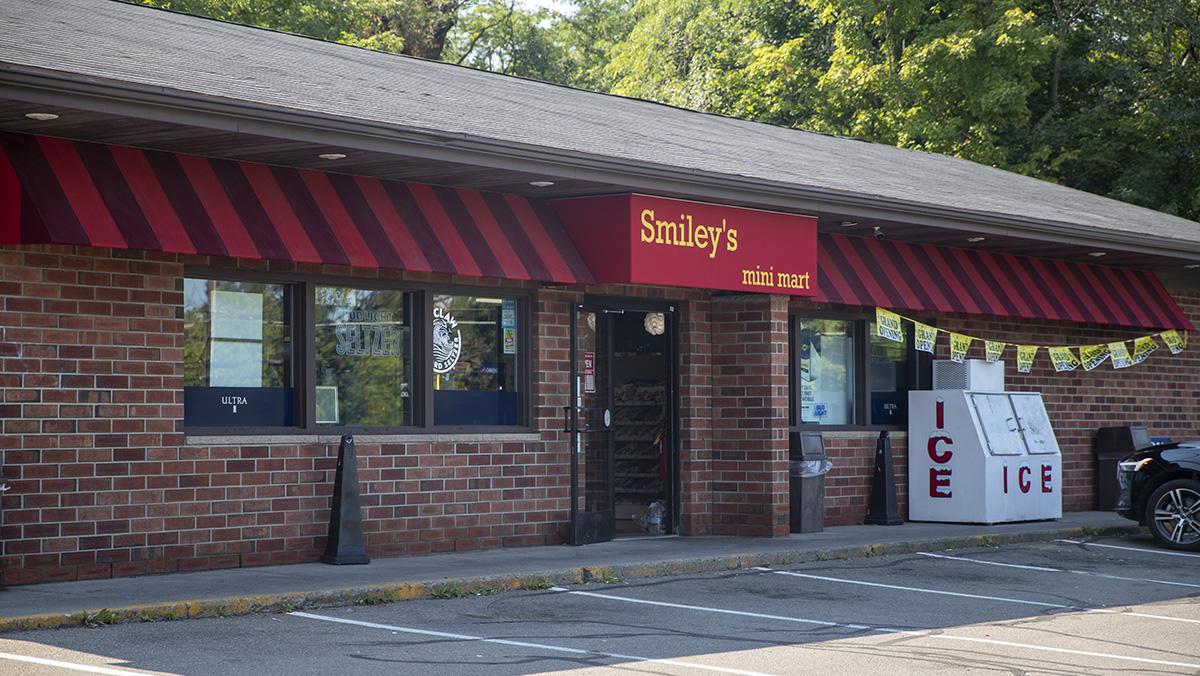 Malik Clement/The Ithacan
Smiley’s Mini Mart is located right off the college’s campus at 825 Danby Road, next door to the Sunset Grill. Before Smiley’s Mini Mart opened in August 2022, the store was a local convenience store chain called Dandy’s. Raj Singh, who also owns a store in Newfield, bought Rogan’s Corner from Dandy's in June 2022 because he wanted to cater to college students.
By Liam McDermott — Contributing Writer
Published: September 21, 2022

Smiley’s Mini Mart is located right off the college’s campus at 825 Danby Road, next door to the Sunset Grill. Before Smiley’s Mini Mart opened in August 2022, the store was a local convenience store chain called Dandy’s and until 2018, the store was a privately owned convenience store named Rogan’s Corner. Rogan’s Corner has been known for years as a staple spot for Ithaca College students to purchase everyday things such as snacks and drinks. Smiley’s is open from 7 a.m. to 11 p.m. Monday-Saturday and 7 a.m to 10 p.m. on Sundays.

Raj Singh, who also owns a store in Newfield, bought Rogan’s Corner from Dandy’s in June 2022 because he wanted to cater to college students, something he said he thought that Dandy’s had failed to do.

“Our aim is to be a one-stop shop for groceries, takeout, gas, bowls, bongs … and lighters,” Singh said. “It is a great community and the students have been very welcoming.”

However, opening Smiley’s was more of a challenge for Singh than he had anticipated, as Dandy’s had taken a lot of the equipment, like an oven, that was supposed to be left in the kitchen.

Singh said that he had to order a new oven and that it delayed the store from selling some food items. Not only that, but supply chain issues, which has caused problems for stores and companies nationwide because of labor shortages, lingering effects from the COVID-19 pandemic, and effects from the Russia-Ukraine war caused the delay in the oven being shipped. Singh said that the oven has since come in and that the store is in full swing except for lottery tickets, as Singh said he has to wait for the all-clear from the New York State Gaming Commission before the store can start selling the tickets, which Singh said he expects to happen at the start of October.

Some students at the college are excited about the changes on Rogan’s Corner and said that they would much rather support local businesses like Smiley’s Mini Mart than a chain like Dandy’s.

Sophomore Maria Baker said she did not notice much of a difference between Smiley’s and Dandy’s, but thought that the atmosphere was more relaxed.

“Employees here seem more happy now than those who were here when it was Dandy’s,” Baker said. “Workers are better now, but the inventory was better when Dandy’s was here.”

Sophomore Alex Daniel said that when his car broke down a couple of weeks ago, Smiley’s had jumper cables available for him to purchase, saving him a bus trip down to an auto store in town.

“The employees here just bring a lot of enthusiasm into their job,” Daniel said. “They’re open until 11 almost every night, so it really shows how much they cater to students.”

“Some of the products here have really raised an eyebrow to how different this store is from other convenience stores, especially since they have a whole cabinet of bongs for sale,” Caudell said.

Smoking accessories are not the only thing that makes Smiley’s different from other convenience stores, though. Jim Reynolds, the chef at Smiley’s, who also was the head chef at the location when it was Rogan’s Corner, said that in the past, Dandy’s primarily sold frozen foods and he wanted to prioritize bringing fresh food back to the Rogan’s Corner area.

Reynolds also said that they offer some more unique dishes than other convenience stores offer, including their chicken on rice. Reynolds said that the corner has always been a go-to spot for students, and that he felt that students deserved better than what he thought Dandy’s was offering them.

He said that Smiley’s offers fresh breakfast and is looking to provide healthier choices for students and faculty at the college.

“I’m excited to be part of this new chapter at Rogan’s Corner and am excited to get to know both the students and the alumni,” Reynolds said. “With new apartment buildings being built, we hope to provide a quick stop-and-go experience for students who may live off campus.”