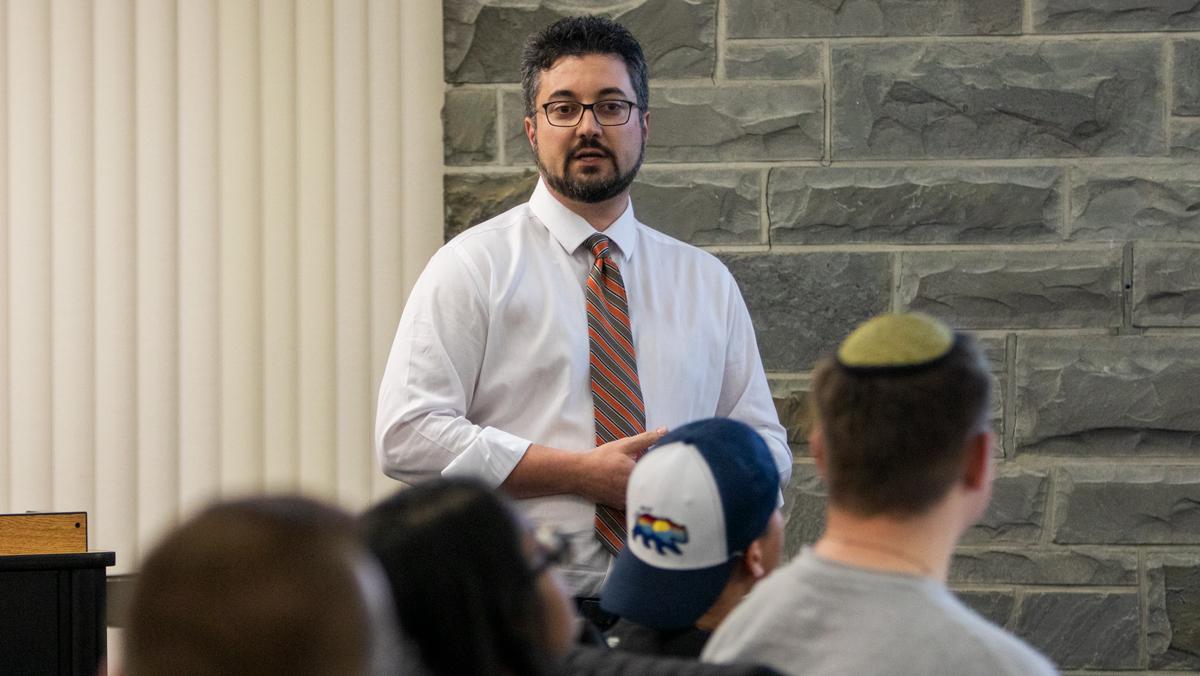 Kristen Harrison/The Ithacan
Guilherme Costa, vice president of legal affairs, met with the Student Governance Council on Nov. 18 to discuss the proposed changes. The new proposed policy prohibits employees from having intimate relationships with students because of the imbalance of power that exists within the relationship.
By Ithacan Staff
Published: December 4, 2019

Editor’s Note: A version of this story published in the November 21, 2019, issue of The Ithacan contained errors and misinterpretations sufficiently egregious to justify publication of a corrected version of the story. The editors apologize for this failure of reporting. A complete list of corrections appears at the end of the story.

Ithaca College is proposing a new policy that will prohibit intimate relationships between all faculty and staff members and students.

The new proposed policy prohibits employees from having intimate relationships with students because of the imbalance of power that exists within the relationship. It states that any employee in a relationship with a student that began before the policy is enacted must disclose the relationship to the Office of Human Resources.

The current policy, Section 2.6.4 of Volume II of the Ithaca College Policy Manual, prohibits intimate relationships between faculty or staff and students if the faculty or staff member has supervisory, instructional or evaluation authority over the student.

Guilherme Costa, vice president of legal affairs, met with the Student Governance Council on Nov. 18 to discuss the proposed changes. Costa said the senior leadership team will publish the final version of the policy after meeting with the SGC, the Faculty Council, the Staff Council and the campus community to receive feedback about the policy. Costa said this is an iterative process that includes reviewing the input the councils give and possibly returning to the councils as a part of that process. He said the proposed policy is still in the draft process and is subject to change.

Costa said that there is no set timeline for the policy but that he hopes this process will be completed by the end of Spring 2020 and that the policy will be ready for implementation in summer 2020.

Section 2.6.5 of Volume II of the current policy manual does not forbid relationships between supervisors, who are employees of the college in managerial roles who are not students, and supervisees, who are employees of the college who are also not students. It does acknowledge that there is an imbalance of power in the relationships, so consent may not protect an individual from allegations of sexual harassment. Sections 2.6.4 and 2.6.5 both currently fall under the sexual harassment policy.

“It feels more appropriate to really take it out of the sexual harassment policy and make a stand-alone policy about relationships involving employees and really treat it as an HR type of policy governing the behavior of our employees and what is acceptable and what is not acceptable,” Costa said.

Costa said it the employee’s responsibility to not engage in a relationship with a student, and as a result, the student cannot be punished for violating the policy.

“When everyone is happy and in love, everything’s great,” Costa said. “When things start going south, then it gets really complicated. To have that happen in a college setting involving students and faculty presents different challenges because as students in a residential college, you live and you go to school and many of you work here.”

He said that another concern regarding a relationship between a student and a faculty member is that it could have negative effects on the students’ academic standing. He also said a relationship can shift from consensual to nonconsensual because of unequal power dynamics that exist in the relationship.

“There’s a belief that relationships involving students and employees in the academic setting can inhibit student success,” Costa said. “Things that may feel consensual at one point early in the relationship can really stop being consensual and can put both the student and the staff member in a really awkward position kind of at the end.”

At the SGC meeting, junior Senate Chair Abigail Murtha said the policy should clarify specific cases. She gave an example of a student who graduates and goes on to work for the college but is also in a relationship with a student that began while both individuals were students.

“What happens if two students are in a relationship and then one of them graduates and gets hired by the college?” Murtha said. “What is the protocol for that?”

Costa said the policy is not meant to punish a recent graduate working for the college who is in a relationship with a student. He said the new policy bans student and employee relationships but that any policy needs to be flexible enough to evaluate individual cases.

“There needs to be some flexibility on policy rather than just a straight-up prohibition,” Costa said. “The default is prohibited, but we wanted to make sure case-by-case situations can really be reviewed.”

Costa said the policy will not have an effect on relationships between students and student employees. He said the proposed policy explicitly excludes student workers who are not graduate assistants from being held responsible for violating the policy because they are considered students, not employees.

Senior Alex Perry, varsity sports senator, said he is unsure why the proposed policy would need to be implemented. He said two adults should not need to disclose their relationship, especially if they are in different departments.

“I don’t understand, like yes, there’s inherent inequity between faculty or staff and students, but given that the two individuals involved are not related or there’s no direct supervision over it, I’m not sure,” Perry said. “I’m struggling to understand why that would need to be implemented, especially if the student is an older student.”

Junior Connor Shea, vice president of campus affairs, said he wanted to know how the campus community will be made aware of the new policy.

Costa said the communications plan being developed for the policy will be more focused on informing faculty and staff through college meetings, school meetings and department meetings. He said that this is because the new policy applies specifically to employee behavior and that it is the employee’s responsibility to follow the policy. He said that students will be made aware of the policy at meetings like the all-college gathering.

Sophomore Hunter Simmons, Class of 2022 senator, said he wanted to know if there was room to change the language of the bill in order to make it more inclusive.

“In one section, I noticed there’s he or she, maybe using singular they pronouns to be more inclusive,” Simmons said.

Costa said that the policy is still in the review process and that once the final version is published by the senior leadership team, it will be embedded in the onboarding process for all new employees and shared at orientation. He said that the proposed policy is focused on employee behavior but that students also need to be aware of the changes.