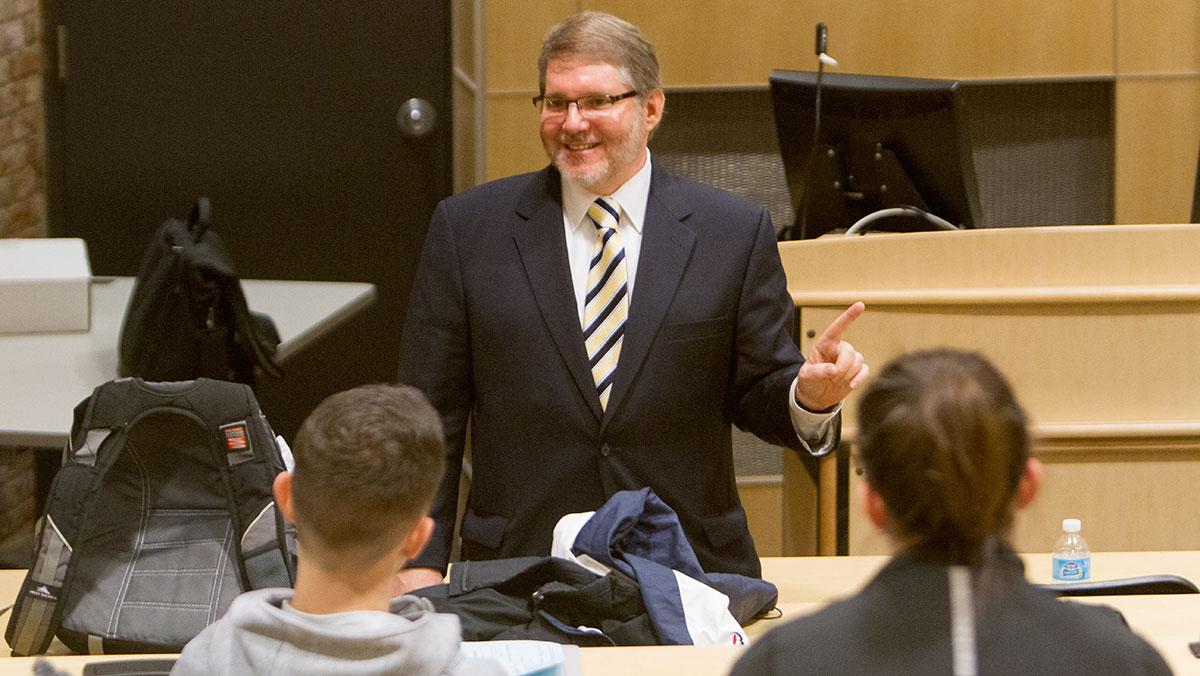 Beginning June 1, Ithaca College will have a new provost and vice president for educational affairs.

Ithaca College President Tom Rochon announced Jan. 8 that he had selected Benjamin Rifkin, dean of the School of Humanities and Social Sciences at the College of New Jersey, for the position. Rifkin will replace Linda Petrosino, who has been serving as interim provost and vice president of educational affairs since former provost Marissa Kelly left the college in May 2014.

Rochon said he chose Rifkin for the position because his beliefs on learning align with those of the college.

Rifkin said he is excited about his new position, because it combines academic and student affairs, something that he has strived to do throughout his career in education.

“What I really find very exciting about this position is the ambition of the college to create a holistic and unified learning experience for the students that integrates what has been on most campuses in the country — the two very distinct spheres of the student experience,” Rifkin said. “That’s something that has been a profound interest for me over the course of my career.”

Rochon said creating the position of vice president of educational affairs was an effort to improve the college experience for students. He also said Rifkin’s emphasis on the student experience makes him a good fit for the college.

“The decision to bring student affairs and academic affairs into one division reporting to one person is part of the commitment to being student oriented,” Rochon said. “I learned from him and from the extensive reference checking I did that he is very highly student-centered.”

Rifkin’s focus on the student experience began during his undergraduate career at Yale University, where he said some of his most profound learning experiences happened outside of the classroom. One of these experiences was when Rifkin took a volunteer position teaching center-city children. Though he only expected to volunteer for one semester, Rifkin said he ended up spending four years with the program.

“I so fell in love with the kids, with the program, with the opportunity to give back to the community, and it really helped me grow in ways that I could not have imagined when I first started,” Rifkin said. “I had no idea that this was going to become an important part of my college experience, and it was huge.”

In addition to his value of improving the student experience on campus, Rifkin also supports off-campus learning opportunities. During an open meeting at the college on Dec. 6, 2014, Rifkin emphasized the importance of internships and study abroad. Rifkin said he thinks these opportunities give students the chance to better prepare for life after college, by learning in other environments.

“In order for students to move forward into postgraduate life, successfully, they need to have internships, to go on study abroad, to take advantage of opportunities off campus, to experience the world of work and then reflect on it,” Rifkin said. “Regardless of the path, I want students to be aware of the world outside of the campus.”

This passion for study abroad also came from his undergraduate experience. While working on his bachelor’s degree in Russian and East European studies, Rifkin spent a semester in Leningrad, Russia — which is now known as Saint Petersburg — during the Cold War. He said this experience gave him a better understanding of the world and of himself.

“I came to understand so much more profoundly what it means to be American and what freedom means,” Rifkin said. “Other students in other cultures obviously have different experiences, but everybody comes back more mature, having grown in ways they could not have anticipated.”

When Rifkin arrives at the college in June, Petrosino will return to her position as dean of the School of Health Sciences and Human Performance. Petrosino said in an email that she is excited to bring the experience she has gained in the provost’s office to HSHP.

“As the dean, I will be working not only with the leadership of the school of HSHP and the faculty but also have the opportunity to continue to work with the new provost and the vice presidents as part of the administrative team of the institution,” Petrosino said. “I look forward to bringing a wider, deeper knowledge base back to my role as dean of HSHP.”

Though Rifkin will bring with him more than 25 years of experience in higher education and an understanding of the college’s ambitions, he said he plans to spend his first year in the provost’s office listening and learning from everyone at the college.

“I recognize that I am not well-enough informed at this point to be able to proffer the strategies or solutions to achieve [the college’s] goals,” he said. “What I can promise is that I will be talking with and listening to lots of people all over campus, gathering information.”