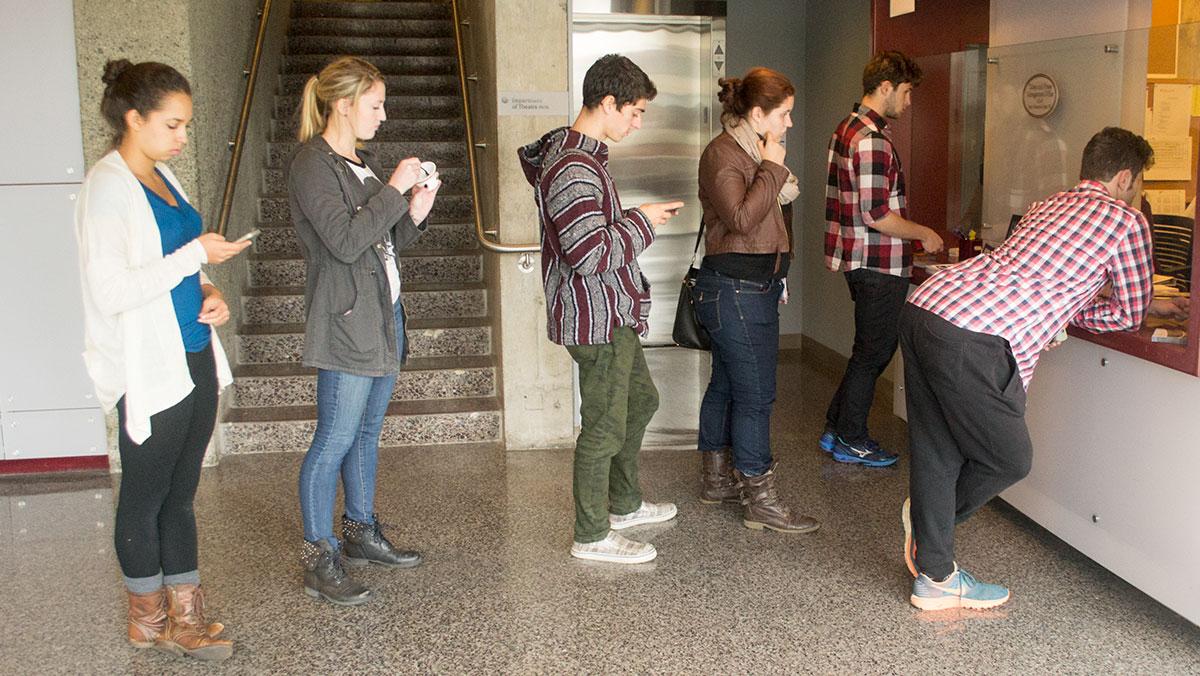 Jennifer Williams/The Ithacan
Students wait in line at the box office in the Dillingham Center. The box office will be open noon–5 p.m. for all students and the Ithaca community. The TicketForce website will also be an option for ticket buyers.
By Tom Garris — Contributing Writer
Published: September 24, 2014

The Ithaca College Department of Theatre Arts has teamed up with TicketForce, a Web-based ticketing systems company, to more efficiently manage the student box office for theater productions, the first of which will premiere Oct. 3.

The private label ticketing option has created a fully controllable, customized website for the college, which can develop sales reports and improve ticket distribution in the box office, online and even on mobile devices, according to the TicketForce website.

Susan Monagan, manager of audience development and special programs, said after being introduced to TicketForce at a convention last January, the department signed a contract with the company over the summer. The company had over 400 clients as of last year, as well as a 98 percent yearly customer retention rate according to the TicketForce website. Monagan said TicketForce is cost-attractive and user-friendly.

Brad Smith said the largest impact for the college was TicketForce’s creation of a demo website that can be used for student training. He said the college can practice using the system by imitating events and ticket orders that would go on the real website.

“Whatever it is that Ithaca wants to require the students to do, they can do it in the full software system, but not in a live environment,” Smith said. “They’re going to be able to take off and run with it.”

He said TicketForce will conduct onsite training at the college — most likely with faculty who will then have the duties of training the students on the website software. Customer support will also be available at any hour.

Monagan said she has not yet formally scheduled on-campus visits for TicketForce representatives.

She said this type of online training for students may be used in the future, but this year’s training of box office associates on Sept. 19 was mainly focused on teaching them how to sell and exchange tickets.

Monagan said the college’s student box office is a student-run distributor of tickets for shows produced by the Department of Theatre Arts. The box office team is composed of students within the department, with two student managers overseeing about 15 student box office associates.

“Customer service is a big thing because that’s what people remember the most,” Fink said.

Previously, the Department of Theatre Arts as well as other theaters in the Ithaca area had a shared service with Tickets.com, a ticketing company that works with high profile clients such as Major League Baseball. However, Monogan said the college had to look for other options after Tickets.com raised their prices and complicated the partnership.

Sophomore theater arts management major Alyssa Napier said last year’s ticketing system saw a downgrade in operations. No new online system had been chosen, so a hard-ticketing system was put into place. The department had pre-printed tickets for each show, selling them and making records by hand.

Napier said TicketForce has allowed the department to view history reports of ticket sales that include a book of customers, simplifying the ticketing process.

The website is up and running at ithaca.ticketforce.com. Community members can now purchase tickets online as well as in the in the Dillingham ticket office. The box office opened at noon Sept. 22 and will remain open noon–5 p.m. Monday through Friday. “The Good Person of Setzuan,” the department’s first show of the school year, will premiere at 8 p.m. Oct. 3 at Clark Theatre.