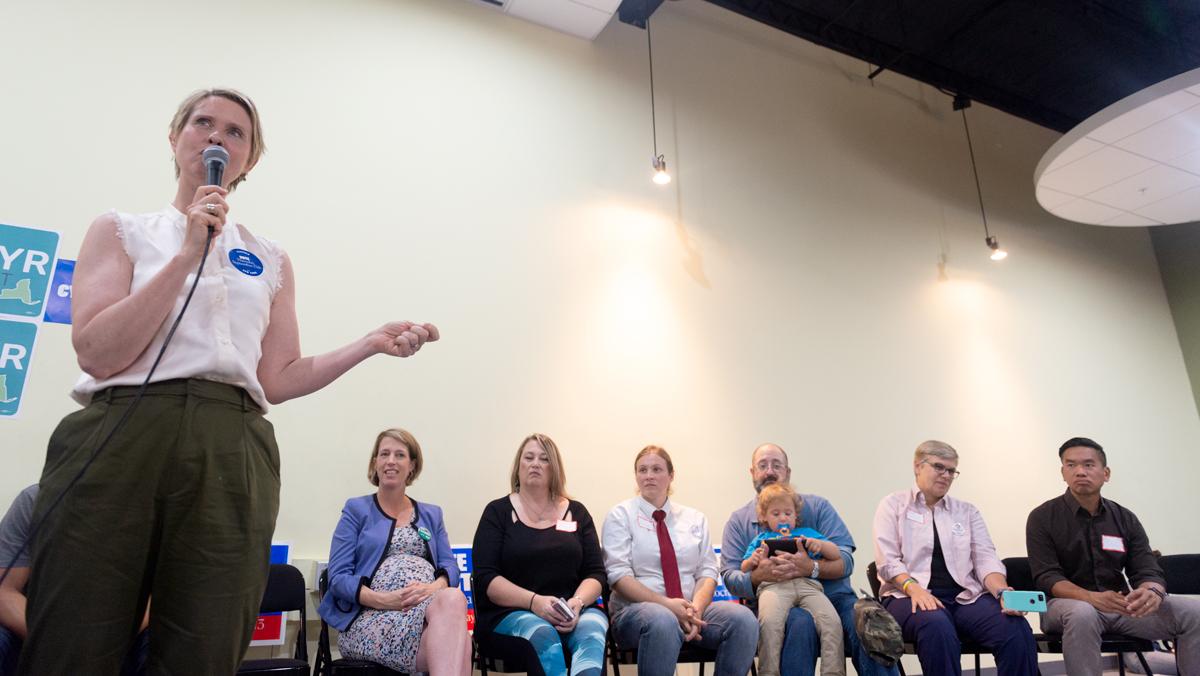 Cynthia Nixon, Democratic candidate for New York state governor and challenger to incumbent Andrew Cuomo, announced her platform’s significant environmental goals, including a plan to transition New York to 100 percent renewable energy, at an event in Ithaca on Sept. 1.

Nixon is an actress and activist running on a progressive platform. She is challenging the democratic incumbent Cuomo, who has been in office for two terms. In the gubernatorial primary, Cuomo polled at 59.5 percent and Nixon at 26 percent, according to RealClearPolitics. Nixon decided to come to Ithaca because it is considered a progressive hot spot in upstate New York.

Nixon arrived around 11 a.m. at The Space @ GreenStar. Facing a room of approximately 200 people, ranging from young children to college-aged students to older members of the community, Nixon was accompanied by Zephyr Teachout, candidate for New York state attorney general, and 13 other activists from her campaign and the Ithaca community.

At the event, Nixon announced her plan to transition New York to 100 percent renewable energy, focusing in on Cayuga Power Plant’s plan to transport out-of-state natural gas to Ithaca. The plan would allow 50 to 120 trucks per day to transport natural gas to the power plant. Instead, Nixon said she wants to convert the power plant to a solar energy plant. She emphasized that even though fracking is banned in New York, there is still a lot of work to be done in environmental activism.

“Banning fracking is only a first step, and it doesn’t mean much if we are still exporting so much fracked gas from Pennsylvania and running the gas through pipelines … and locking ourselves into decades of fossil fuel infrastructure,” she said.

Nixon also announced her plan to pass the Climate and Communities Protection Act and the Climate and Communities Investment Act, both of which would protect communities from large, polluting companies, hold those same corporations accountable for damage and help communities transition to renewable energies. She plans on investing in communities by enforcing a “polluter’s tax,” which would raise 7 billion dollars in the first year it is enacted by taxing companies and corporations that pollute. Nixon said this money will be used to transition New York to 100 percent renewable energy.

Nixon said one of the other major issues she wants to address is the budget cuts to New York’s public schools and the socioeconomic inequality in these communities, which she said she has personally seen the effects of in her firstborn son’s public school when he entered kindergarten. She said she was shocked to find out that the music and art teachers in her son’s public school had been fired, along with the assistant principal.

“Because of budget cuts, it was so different than the school I had picked out for him a few months earlier,” Nixon said. “It hit me that this is what the cuts look like in my kid’s school on the upper west side of Manhattan, so what are the cuts like in Brownsville in Brooklyn and Mott Haven in the Bronx? What are the cuts like across our city in communities of color where the schools are so underfunded to begin with?”

Nixon addressed New York state prison reform, saying that mass incarceration must end. She also addressed the need for the legalization and decriminalization of marijuana, which she described as a system deeply rooted in racism.

“Using marijuana has been effectively legal for white people for a long time,” she continued. “It’s time to make it legal for everybody else.”

Cornell University senior Sofia Boucher is a resident of Ithaca and said she attended the event because she believes that being informed as a voter and being in tune with the community is important.

“I see activism like this as informative, so I came to get more information to inform my vote on Thursday,” Boucher said.

For Cornell junior Dana O’Rourke, this event was a bit different. O’Rourke is from Massachusetts and said she attended the event because she believes it is important for voters to know about the political dynamics in other areas.

Boucher said she thought the most important issues discussed were the environmental issues, especially the Cayuga Power Plant.

“I think New York has a lot of potential to be a leader in the country in environmental issues, and that will be what sways me one way or the other,” Boucher said. “Who is going to get environmental activism into the legislature in New York?”

O’Rourke agreed the environmental issues were important but said she was interested in the prison reform as well.

“It’s an issue facing New York, facing Massachusetts, facing the whole country, so I think it’s great to see people in office taking that on,” she said.