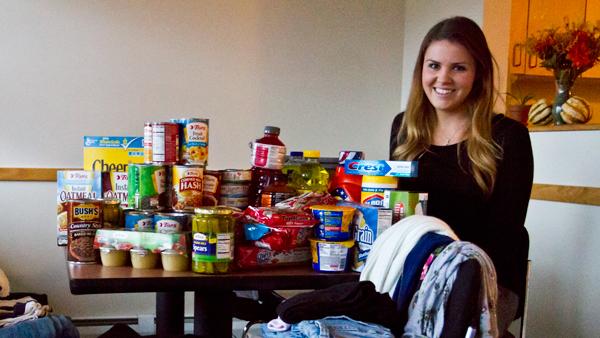 Everything changed for junior Lindsay Tomaro when Hurricane Sandy hit.

Her home in Monmouth County, N.J., took minor damage and uprooted trees narrowly missed her house, but water and sand ravaged the first floor of her aunt and uncle’s beach house in Mantoloking where she spent every day of summer for 11 years.

“Every day was a memory,” Tomaro said. “Looking at the pictures and footage of places that I grew up in and have been to was really hard.”

After seeing the pictures, she decided to organize a donation drive at Ithaca College for victims.

“I wanted to do something,” Tomaro said. “I thought the best way would be to collect stuff and help people who lost everything.”

Tomaro’s family went without power for 12 days until Nov. 11, so they were unaware of the scale of the damage. Tomaro said she didn’t know how much Sandy had affected her hometown until she checked Jersey Shore Hurricane News, a Facebook page that gets updates from many news outlets.

“I was the only one in my family who knew what was going on,” Tomaro said. “I was frustrated, because I wasn’t with my friends who were helping every day.”

The death toll from the hurricane reached 119 as of Nov. 5, and about 45,000 families were approved for housing assistance by the Federal Government after the storm, according to The New York Times. New York Gov. Andrew Cuomo told the Associated Press Hurricane Sandy could total $33 billion in damages.

Tomaro is accepting donations of non-perishable food, toiletries and lightly-used clothing for survivors of the storm. So far, Tomaro has collected seven vats of non-perishable food for the victims. On Monday, she was at the Public Relations Student Society of America networking night at La Tourelle resort and spa in Ithaca gathering toothpaste, detergent and clothes.

Junior Jackelyn Branco, another student from New Jersey and a friend of Tomaro’s, shared Tomaro’s feeling of shock when she saw photos of the damage. Branco learned of Tomaro’s relief effort and decided to pitch in.

“I was shocked to see places where I spent my childhood washed away,” Branco said. “[Lindsay’s] response is great. I just wish we could do more.”

Tomaro made a Facebook page called “Collecting Donations for Victims of Hurricane Sandy!” on Nov. 7. More than 600 students were invited to the group, and 10 people have donated already. Tomaro said she felt overwhelmed and impressed by the campus community’s positive response.

Like many from New Jersey, Tomaro and Branco said they were inspired by New Jersey Gov. Chris Christie’s response to Hurricane Sandy. His non-stop effort makes all of New Jersey proud, Tomaro said.

“Sandy gives New Jersey a way to restore its image,” Branco said. “The Jersey Shore is not just a place to party; people live here.”

During Thanksgiving break, Tomaro, Branco and many other New Jerseyans plan to help with the relief effort.

“I’ll be going around New Jersey trying to help as much as possible,” Tomaro said. “A lot of friends and family lost everything.”

The New York chapter of United Way, a non-profit organization that pools funds for charity fundraising, is accepting monetary donations from students and forwarding them to the American Red Cross. Health Science and Human Performance Student Board of Advocates is holding a food and toiletry drive called “Salvation for Sandy.” Students can drop off donations until Thursday in the Center for Health Sciences, Hill Center and Smiddy Hall.

Tomaro said she urges students to also donate to the Federal Emergency Management Agency and the American Red Cross. New Jerseyans need heavy duty garbage bags and masks to avoid breathing in debris, she said. The storm hit a strip of towns between Seaside Heights and Mantoloking hard, so Tomaro said she suggests donating to those areas.

“I actually got Buffalo Street Books to donate some books, which was amazing,” Jarosinski said. “I asked for about a dozen and they gave me over 20 books.”

In New York City, another target of Hurricane Sandy, Senior Carly Gill, a student at the Ithaca College New York City program, experienced the storm firsthand. She helped clean up and collect supplies at Rockway Island through her internship with the Late Show with David Letterman.

“Going 36 hours without power was nothing compared to what some of these people have experienced,” Gill said.

Branco said Hurricane Sandy gave her a new perspective on what she values in life.

“The biggest lesson I learned was to appreciate what you have,” Branco said.

Tomaro shared Branco’s sentiment about their harrowing experience. FEMA is with her community every day as they restore their homes, Tomaro said.