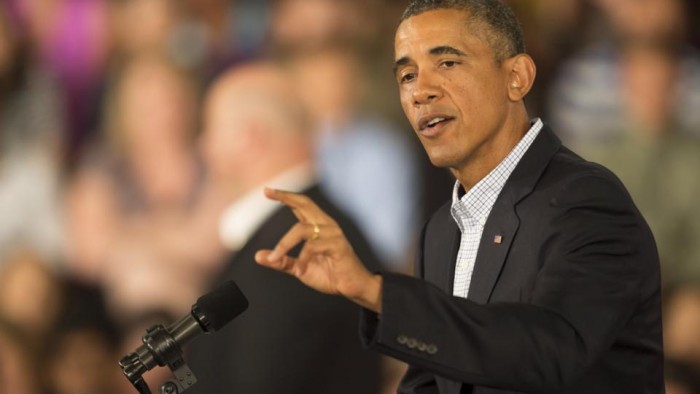 A proposed rating system to determine federal funding for colleges and universities based on academic value was at the center of President Barack Obama’s speech during a visit to SUNY Binghamton on Friday. The proposal is part of the president’s attempt to address the issue of college affordability.

Obama discussed his proposal at a town hall–style meeting with about 350 students, faculty members and members of the press. This visit was the third stop of the president’s two-day college affordability bus tour, which began Aug. 22 at the University of Buffalo.

In his speech, the president emphasized the importance of making higher education available to all Americans. Obama said college is a necessity, and it’s his priority to make it more affordable.

“It’s my basic belief… that higher education shouldn’t be a luxury,” Obama said. “It’s an economic necessity in this knowledge-based economy, and we want to make sure that every family in America can afford it.”

The first part of the president’s plan is a rating system for colleges and universities based on the academic value of the school. This rating system would be based on factors such as the average amount of debt after graduation, student default rates and graduation rates.

Obama said this system would provide prospective students with information about the value of attending certain schools.

“What we want to do is start looking at factors like how much debt do students leave with, and do they actually graduate,” Obama said. “…Giving [students] some concrete measures that will allow students and families to gauge ‘If I go to this school, am I going to get a good deal?’”

According to James Kvaal, deputy director of the Domestic Policy Council, the president wants to link these new ratings with federal aid for colleges and universities. Kvaal said schools that provide more opportunity and better value to students will be rewarded with higher ratings.

“Once those college ratings are in place, the president will seek legislative authority to tie federal financial aid to those ratings so students could get extra resources for attending colleges that are doing the best job-creating value,” Kvaal said. “These ratings will reward colleges for improving, so colleges that are making great progress will be recognized.”

Obama said the rating system will also encourage more expensive schools to keep their tuition rates low. By threatening to decrease federal funding, the government will be able to regulate both for-profit and not-for-profit schools with low value, the president said.

Obama commended the State University of New York schools for keeping their costs low without sacrificing quality. He did, however, imply that some schools may be challenged by the new rating system.

“I’m excited because of the great work that SUNY campuses like Binghamton are doing to keep costs down for hardworking students,” Obama said. “Hundreds of thousands of SUNY students all across the state are getting a world-class higher education without some of the debt and financial burden that is stopping too many young people from going to college.”

“Ithaca College tuition… has been rising over the years, and while they do provide a terrific value, and their students come out prepared for the real world, we have to be approaching it differently,” Myrick said. “It’s going to also be an opportunity for the colleges who are doing a great job providing a great value to set themselves apart from their peers.”

Anthony Hopson, vice president of community and government relations at the college, disagreed with Myrick. Hopson said the college already has both high graduation and retention rates, so it would not likely be hurt by the rating system.

“Ultimately, this is about the price of higher education and the value that students receive, and Ithaca College students receive a tremendous value,” Hopson said. “If [the rating system is] based on performance outcome… which is an industry criteria, we would do well.”

The president also discussed the importance of providing affordable education to minority groups that, because of discrimination, have faced barriers to success. Obama said the country has made great strides in the last 50 years, but there are still groups at a disadvantage because of a legacy of discrimination.

“The legacy of discrimination — slavery, Jim Crow — has meant that some of the institutional barriers to success for a lot of groups still exist,” Obama said. “It’s in all of our interests to make sure that we are putting in place smart policies to give those communities a lift and create ladders so young people in those communities can succeed.”

In addition to discussing his plans for college affordability, the president answered questions from students and faculty about several topics, including green energy. Obama said the government can help solve the country’s energy problems by creating new jobs and continuing to invest in new green technologies.

“We’re going to have to invent some new technologies to solve all of our energy problems,” Obama said. “We can put a whole bunch of folks to work doing it right now. We could gather up a whole bunch of young people here in this community, train them for insulation, for energy-efficient construction and re-do a whole bunch of buildings and institutions right here.”

The president closed the meeting by saying he will spend the next year working with college administrators, faculty and students to develop criteria for what determines a high value education. According to Kvaal, the Obama administration hopes to have the new rating system in place before the 2015 school year.

To see posts on Twitter and Instagram from #ICObama and #BingPOTUS, check out the Storify story here.