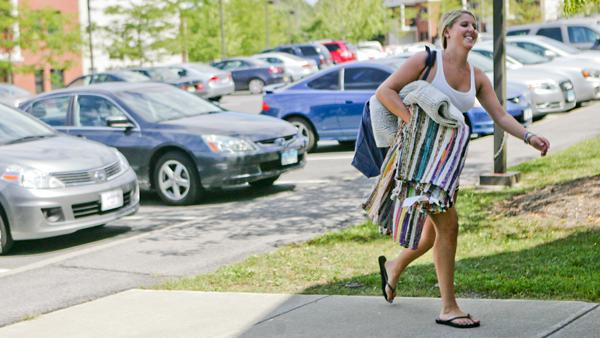 Durst Breneiser/The Ithacan
Junior Emily Weiner moves the last of her belongings into her Circle apartment on Sunday afternoon. This year about half of the number of off-campus applications were approved by the Office of Residential Life.
By Nicole Ogrysko — Senior Writer
Published: August 30, 2012

The college automatically grants rising seniors — students who have completed five semesters by the fall or six semesters by the spring — off-campus housing status if they want, but sophomores and juniors looking to move off campus must apply for approval.

Bonnie Prunty, director of residential life and judicial affairs, said 418 non-seniors were approved for off-campus housing this fall, compared to 761 non-seniors in 2011. This spring, 145 applicants added their names to an off-campus waiting list, compared to 12 students last year.

When the college finished building the Circle Apartments over the summer, it added 138 additional on-campus spaces for this semester.

This year, the college also brought in a smaller freshman class of about 1,570 students — fewer than the targeted class size of 1,600 to 1,650. These factors, plus an increase in the number of sophomores and juniors applying for off-campus housing, all contributed to a higher denial rate for off-campus housing this year, Prunty said.

Junior Sarah Ward signed a lease for a house off campus with a few friends last fall. After she was denied off-campus housing, she joined 144 other students on a waiting list for approval. She met with a member of residential life, but Ward was not granted off-campus status and eventually found other students to sublet the room she leased.

“It was really difficult because we had to find people to fill our lease last minute,” Ward said. “It was very much a scramble to try to salvage the situation at all. It was very, very frustrating.”

Prunty said some students ended up doing what is termed “phantom housing” — where students live off campus, but maintain their on-campus assignments while still footing the bill.

For senior Tim Hone, “phantom housing” wasn’t an option because he could not afford to rent both the on-campus and off-campus apartments. Hone entered the college as a freshman during the spring 2010 semester and just missed the mark for senior status. Though he received approval to live off campus last academic year, Hone didn’t accept, but he said he expected the process would be as easy as the previous year. He signed an off-campus lease in the fall but wasn’t approved for off campus housing. It wasn’t until two weeks ago that Hone said he found someone to sublet his lease off campus.

“I thought I was going to have to drop out of school because I was going to be responsible for the lease and for some sort of on-campus housing,” Hone said.

Hone said he knows he should not have signed an off-campus lease until the college approved him, but he said it was difficult to wait when most other students interested in off-campus housing begin signing leases in the fall.

Prunty said the number of students approved for off-campus living depends on how many spaces the college has after filling the dorms for the incoming freshman class.

Prunty said the college originally planned to approve 340 students to move off campus. Those who submitted their applications after the college reached that number — like Ward and Hone — were placed on a waiting list.

None of the Circle Apartments are completely vacant this fall, but there are a few single spaces open in some, which Prunty said is typical at the beginning of every school year.

When a record-large class came to the college in 2009-10, the college was forced to find temporary housing space in student lounges and Terrace 13. Prunty said she also heard from many upperclassmen who wanted to live in an on-campus apartment, but were turned away at housing selection in previous years.

“We [thought we] would be in a better position for both classes if we built additional Circles, because not only would that accommodate the seniors who wanted to be in apartment-style living on campus, but it takes them out of the traditional spaces, which allows space for our first-year students to be in doubles and singles, instead of having to be in temporary housing,” Prunty said.

Rather than facing the risks of not securing a Circle or Garden apartment for the next year, some students find choosing off-campus housing a more viable option. Some students, like Ward, say their intent is to save money by moving off campus.

Required to live on campus, Ward said she worked with residential life to find housing that was within her budget. Rather than moving into a Circle Apartment, she and her friends opted out of a meal plan and into two separate Garden apartments.

“We were trying to find something cheaper,” Ward said. “We figured living not in the Circles — because that’s much more expensive — but living in the Gardens and not having a meal plan was at least a little bit cheaper than living in a dorm and having a meal plan.

Hone was also randomly placed in a Circle, which he said happened to be with his friends.

“There was a certain level of compassion missing,” Hone said. “It was like we need your $13,000 for room and board, and that’s it. That’s the end of it, and if you can’t do that then you have to drop out.”

To prevent future conflicts, Prunty said students should not sign lease agreements for off-campus housing until they know they have approval from the college, though she said she recognizes the competitive nature of securing housing for the next year.

“We had a number of students on that [waiting] list who have leases off-campus and on-campus obligations, and we don’t want our students to obviously end up in that position again,” Prunty said. “It’s going to be really important given this history that students be really careful about not doing that in the future.”