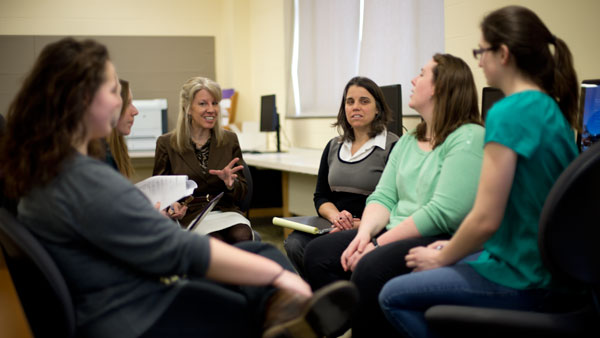 Amanda Den Hartog/The Ithacan
At center, Patricia Spencer, assistant professor in the Department of Writing, involves students in the community by having them write grants for local businesses in her class “Proposal and Grant Writing.”
By Taylor Zambrano — Staff Writer
Published: February 19, 2014

As Ithaca College strives to build ongoing community involvement, a new $500,000 grant from the Fred L. Emerson Foundation awarded to the Office of Civic Engagement will enable it to establish a permanent endowment, which will accelerate this institutional initiative.

Anthony Hopson, assistant vice president of community and government relations and civic engagement, said the OCE was created as an IC 20/20 initiative with a goal of making sure that student involvements — both on and off campus — also incorporate educational value. He also said the office works closely with the Office of Student Engagement and Multicultural Affairs because it brings in the student perspective to civic engagement.

“We work to talk about community partners, we talk about assessment components, we collaborate on identifying students who have distinguished themselves in the area of service and volunteerism,” Hopson said. “One of the things that we’ve done is to develop deeper collaborations with that area, but [the OCE] has not replaced [OSEMA].”

Patricia Spencer, assistant professor in the Department of Writing, said the OCE serves as a liaison among the faculty, students and greater Ithaca community. She is one of the representatives for faculty and said she sees the office as a bridge for these different conversations.

“So the Office of Civic Engagement, think about it as a physical hub,” Spencer said. “Their job is to make sure that what’s happening in the classroom, which would be more service learning, and what’s happening in community service, which is very different — that’s students volunteering, Service Saturdays, all that stuff — that those two pieces don’t live in completely separate worlds anymore.”

Christopher Biehn, vice president of institutional advancement, said the grant would be used over time to help support the office and develop its programs, but the principle would never be spent, only invested. The goal is for the income of the endowment to grow each year in order to fund new programs as they develop.

“The endowment is like the savings account for the institution, except it’s invested in stocks and bonds and grows at a higher rate than savings accounts do,” Biehn said.

Biehn said the Emerson Foundation has a longstanding relationship with the college. The foundation gives scholarships to students who can’t afford to attend the college along with other charitable contributions like the funding of Emerson Hall.

“We report to them every year from our office on the scholars,” Biehn said. “We do bios on [the Emerson Scholars] and share with the Emerson Foundation who they are. They love reading about them and hearing about the Emerson scholars.”

Spencer, who specializes in professional writing and proposal and grant writing, engages her students in real-life situations by having them write proposals for businesses in the Ithaca community. She said this is an exemplary form of service learning.

“My job is to give my students the inspiration to say, ‘All right, what skills do I take into the community, and how do I engage my skills there?’” Spencer said. “We value hands-on learning, professional practice and I think we’ve always valued our connection to the community, but I think the office finally puts a face on it.”