Office of Human Resources to use new software program 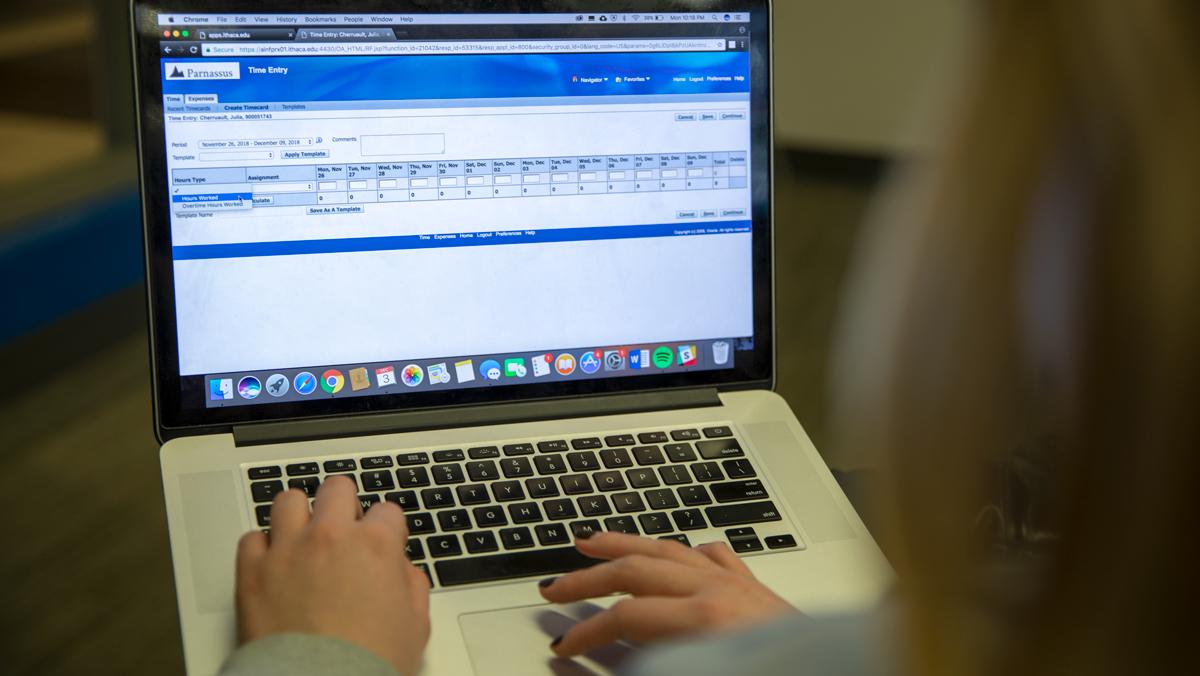 Elias Olsen/The Ithacan
Ithaca College's Office of Human Resources will be transitioning to a new software program for employee hiring and payroll. The current software, Parnassus, will officially be replaced by Human Capital Management in Spring 2019.
By Mary Rand — Staff Writer
Published: December 3, 2018

Parnassus, the human resources software used by Ithaca College employees for hiring and payroll, will be replaced by a new system in Spring 2019.

The new system is called Human Capital Management, a system created by the software company Oracle.

Oracle HCM will include typical functions for payroll such as changing work hours, jobs or employee information, according to an email from the Office of Human Resources. Oracle HCM will offer mobile support and a more streamlined interface, said Kirra Franzese, associate vice president of engagement and talent management in the Office of Human Resources.

The college has used Parnassus for 15 years and has consistently updated it in that time, Franzese said. She said it became necessary to change systems given the advanced age of Parnassus.

Parnassus will not be phased out immediately, David Weil, associate vice president in the Office of Information Technology, said. In Spring 2019, applications for employee or managerial self–service will go live. These services include the ability for an employee to change their address or bank information and for managers to change pay rate or hours. At the start of the fiscal year in July 2019 the complete set of applications, including payroll and benefits, will be ready, Weil said.

The decision to implement the system in phases is in an attempt to prevent confusion over the whole system changing.

“There are so many opportunities with this new platform, but we want to make sure we don’t tackle too much too soon,” Franzese said. “We’re being very diligent about our rollout of the modules to try and avoid as much difficulty as possible throughout the transition.”

As Oracle HCM and Parnassus are both licensed systems, the process of transitioning between them has more to do with transferring information than with development. Currently, the records for all full-time, part-time and student employees must be examined and converted for Oracle HCM, Weil said.

Specific rules for the pay schedules and benefits of individual college institutions must also be implemented in the new system, Weil said.

In the college’s administrative sphere, Oracle HCM will also bridge the gap between the Division of Finance and Administration and the Office of Human Resources, controller Beth Reynolds said.

Currently, the Division of Finance and Administration uses one Oracle system for its duties, with the Office of Human Resources using another. Both require an IT support team and the regular passing of information between them. In an example, Reynolds said all payroll information sent by human resources to finance must be sent and downloaded, a process that takes a day of an employee’s time.

In the cloud system offered by Oracle HCM, Reynolds hopes that information will be accessible immediately and work will be done faster.

Both Oracle HCM and Parnassus are designed to be licensed to institutions and carry an annual cost to renew that license. Compared to Parnassus, Oracle HCM will incur a higher initial cost, accounting for the transition process, but in the long term, it should cost the college the same as before, Franzese said. Franzese would not disclose the cost of the new software because she said that information is confidential.

The update comes as a relief to sophomore Student Manager Ny’rayah Mitchell. Mitchell said she has to work with other students to solve the confusing parts of Parnassus.

“Especially to set up your direct deposit, there’s just certain things you need to be able to know that people don’t know,” Mitchell said. “[Or] making sure that when you hit continue and save, that when it’s time to submit it you actually submit it, because just because you say save, it doesn’t mean it’s submitting.”

Mitchell said she hopes she can go to a workshop on the new system before she teaches it to students.

“If I still can’t figure it out and help people, then this new system is only going to make it worse,” she said.

To ease student confusion, Oracle HCM will allow different looks for timecard input depending on the type of user. It also offers a feature that lets students clock in and out of work on their phone, Franzese said.