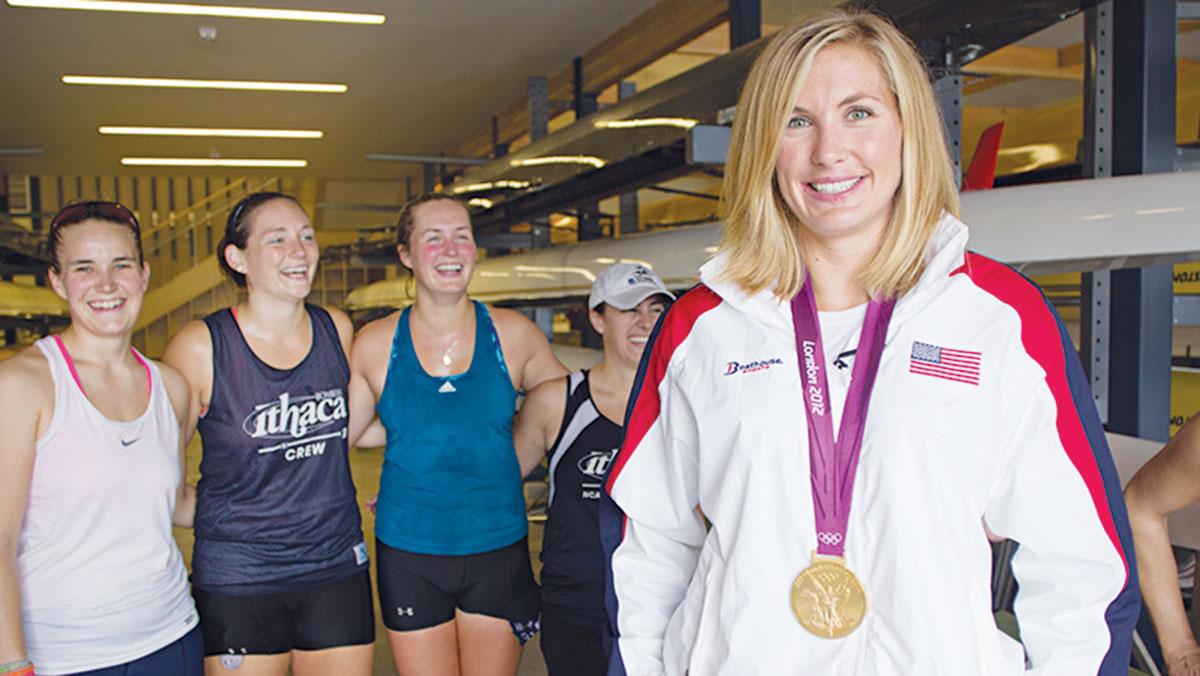 File Photo/The Ithacan
Gold medalist Megan Musnicki '05, who will be the speaker at this year's Commencement, poses with the women's alumni eight crew team during her visit to Ithaca's Ward Romer Boathouse on Sept. 8, 2012.
By Taylor Zambrano — Assistant News Editor
Published: November 20, 2014

Ithaca College has announced that Meghan Musnicki ’05, Olympic gold medalist on the United States rowing team, will be the speaker for the 2015 Commencement ceremony, which will be held May 17.

Musnicki transferred to the college during the spring semester of her sophomore year and graduated with a Bachelor of Science in psychology. She was part of the crew team while at the college under Becky Robinson, current head coach of the crew team, and was co-captain of the team during her senior year.

Shortly after graduating, Musnicki moved to Boston to train in Olympic identification and development camps. She then moved to Princeton in 2008 where she began her training with the U.S. national team in the fall. She went on to compete in the 2012 London Olympics where she won her gold medal in rowing.

Robinson said Musnicki is a great public speaker and has taken the time to speak with the crew team during her previous visits, one being for the opening of the Robert B. Tallman Rowing Center in 2012 and then last year when she was inducted into the college’s Athletic Hall of Fame.

“I think when you have someone as a Commencement speaker that you have had a chance to meet and that you know that has a direct connection to something that you love to do, I think that’s going to be super exciting for them,” Robinson said. “This is something new for the crew. We’ve never had a crew member speak at commencement, so it’s a big deal for us within our crew community and our alumni.”

Senior Mia O’Brien, senior class co-president, said she and four other members of the senior class executive board were given suggestions for speakers and were then asked to list their top five choices to send to President Thomas Rochon.

O’Brien said they decided on Musnicki because she recently graduated from the college, so her advice would be relatable to the audience. She said Musnicki was also a great candidate because she wasn’t necessarily a student from the Roy H. Park School of Communications or the theater department, which was the case for the last few speakers.

“I think when you bring in someone from [Park] or Dillingham, you have that flashier name, but I don’t think that necessarily translates to a great speech,” O’Brien said. “We wanted somebody who transcended the different lines of the schools and really could represent all the schools.”

Musnicki said now that she has her title as Olympic gold medalist, people look at her differently and think similar goals are unattainable, however, she said that’s not the case. She said she wants people to know she’s approachable.

“I was in their exact same shoes, and the only thing that makes me different from them now is that I happen to have an Olympic gold medal, but I’m still the same person,” Musnicki said.

She said when she got the email from Rochon she was speechless, and she has already begun thinking about what she wants to focus her speech on.

“I kind of just want to talk about how it’s not always a straight, direct and easy path to get to your goal and that I’m just a regular person, just like everyone else, who has to overcome a variety of different obstacles and things to get where I am or where anyone wants to be in life,” she said.

Rochon said originally the college hired celebrities who gave speeches on many campuses. However, six years ago, the college decided to reach out to successful alumni to whom students can relate.

“I think having an alum come back to campus and connect with students and be able to say ‘I walked in your shoes,’ ‘I know this campus’ and ‘Let me tell you something about my experiences of the world since I’ve graduated,’ is a wonderful opportunity for our students,” he said. “I’m so happy that we have so many amazing alumni who are able to do this.”

Senior Jonathon Cummings, senior class co-president, said the executive board unanimously decided on Musnicki because she’s an Olympic gold medalist, and she’s very involved with students at the college already.

“She has come to the boathouse, kept in touch with the men’s and women’s crew teams and actually spoke with them, and so she has a good relationship here with a couple of the students and with the college,” Cummings said. “This is a good example of someone who we want as a commencement speaker.”

Currently, Musnicki said she is training with the national team and she didn’t expect her life to take this turn from what she originally went to school for. She said she wasn’t thinking about the Olympics while in school and nobody knows how his or her life is going to look 10 years from now.