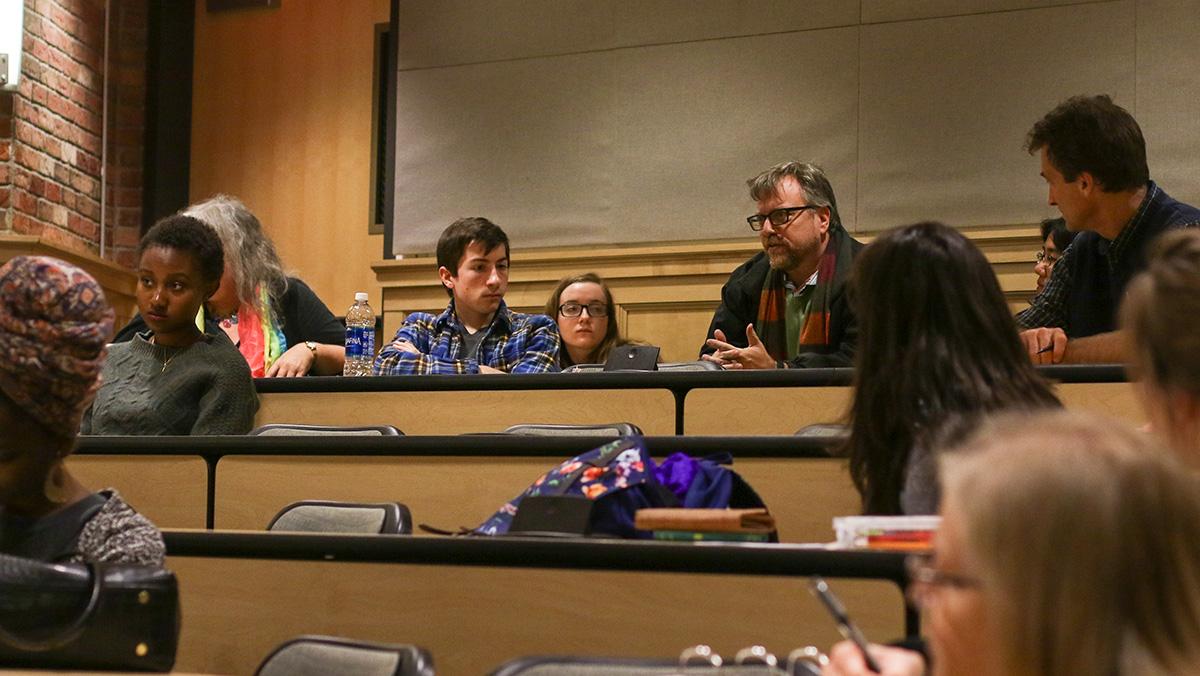 Students, faculty and staff expressed concern over rumors of racial incidents and president Tom Rochon’s handling of them following the election of Donald Trump at an open forum the evening of Nov. 14.

At the forum, hosted by Vincent Wang, dean of the School of Humanities and Sciences, some people criticized Rochon for not taking enough action when some students had claimed Trump supporters were racially harassing students. Rebecca Lesses, associate professor and Jewish studies coordinator, said she is not satisfied with how Rochon has been handling the post-election controversy.

“I think they should be more proactive. … At this point, I don’t know if President Rochon has any credibility on this issue,” Lesses said. “In fact, I don’t think he does.”

After the election, Rochon sent out an Intercom announcement calling for “mutual respect and an environment of inclusion.” He stated that the administration heard “unofficial reports” of “overtly racist behaviors” happening on campus. Tom Dunn, lieutenant in the Office of Public Safety and Emergency Management, later said Public Safety had not received any reports of racial or politically motivated incidents.

Dave Maley, spokesperson for the college, said it would be inappropriate for Rochon to respond to criticism from an event that he did not attend but that he applauds Wang for hosting this forum.

Attendees also discussed what a Trump presidency could mean for students in the LGBT community and for illegal immigrants, and accusations of racial or hostile incidents taking place nationwide and at the college since the Nov. 8 election. About 30 faculty, staff and students attended.

Wang initiated the meeting by saying that he thinks the nation is divided after the election and hopes the college community can come together. Wang then asked how many students had heard of racial or hostile actions taking place on campus after the election. Many students and faculty in the room raised their hands.

“Afterwards, I heard of some very disturbing incidents — some students are harassed,” Wang said. “So I feel this is a very vulnerable time for our community.”

Students spoke about rumors they had heard of people chanting “white power” after the election, people waving Confederate flags and students asking immigrants if they are documented. The Ithacan was unable to confirm any of these accusations.

Senior Taylor Ford said he thinks forums like these are important, especially after Trump’s controversial campaign. Many have criticized Trump’s campaign as being xenophobic, misogynistic and racist.

“I think that it is important to give students the space to talk about their experiences, particularly when bigotry, racism, sexism, xenophobia are so prevalent in our political atmosphere,” Ford said.

“It made space for students to express their fears and try to start to connect with other faculty members who can be support systems for them,” Wheeler said.

During the forum, Wang said that despite the immediate negativity, he is optimistic for the future, and over time, he hopes the political controversy will subside.

“People just have to take care of one another,” Wang said. “Time can heal some… of wounds. We are only six days from the election.”