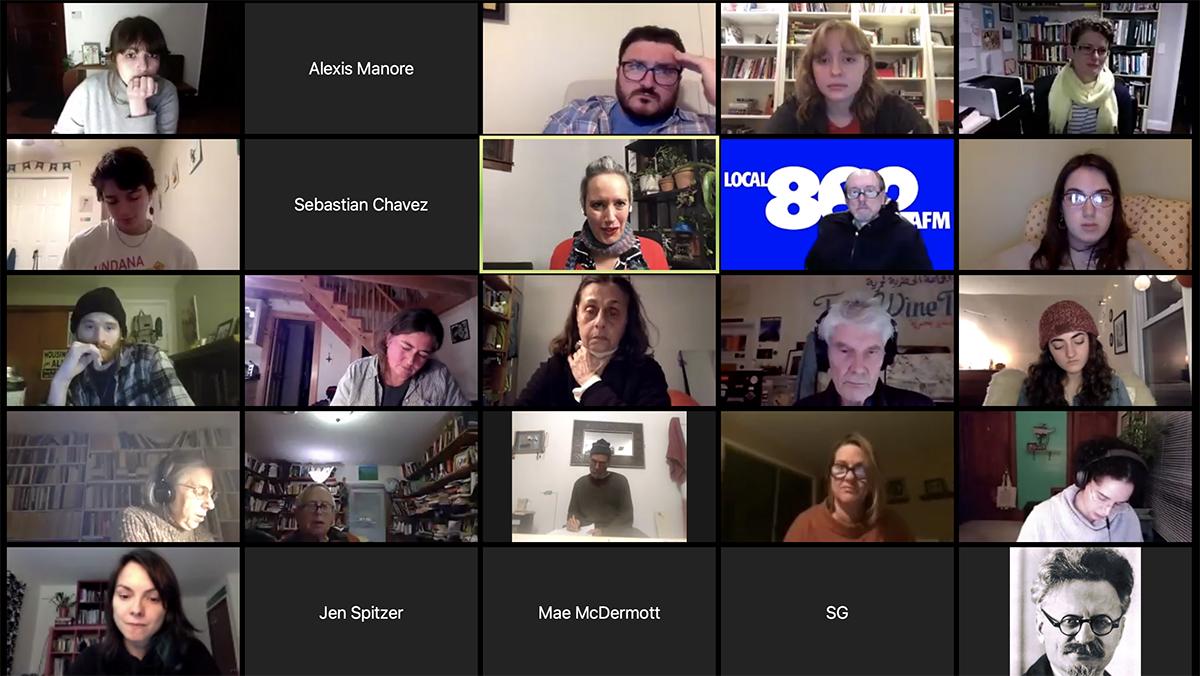 Courtesy of the Ithaca College Open the Books Coalition
The college is currently conducting a review, called the Academic Program Prioritization (APP), of all of its academic programs in which programs will be identified for discontinuation, consolidation, reorganization or growth. This could result in the elimination of entire departments and tenured faculty members losing their jobs.
By Alexis Manore — News Editor
Published: December 14, 2020

The Ithaca College Open the Books Coalition discussed how to push for financial transparency and shared governance to stop the elimination of faculty positions in a Dec. 7 panel.

The event, called “Layoffs Are Not inevitable!: Learning from Hampshire College,” featured speakers from the college, like senior Tali Abraham; junior Sebastian Chavez, Students of Color Coalition senator for the Student Governance Council; and Patricia Rodriguez, associate professor and chair of the Department of Politics. Michele Hardesty, associate professor of U.S. Literatures and Cultural Studies, president of the American Association of University Professors (AAUP) and member of the Spring 2020 negotiating team at Hampshire College in Amherst, Massachusetts, also spoke about her experience in preventing faculty layoffs at Hampshire. Over 90 people attended the event.

Ithaca College is planning to eliminate approximately 130 full-time equivalent faculty positions, an elimination that aligns with its strategic plan, Ithaca Forever. Because of the financial impacts of the COVID-19 pandemic on the college, implementation of the plan has been accelerated. The college is currently conducting a review, called the Academic Program Prioritization (APP), of all of its academic programs in which programs will be identified for discontinuation, consolidation, reorganization or growth. This could result in the elimination of entire departments and tenured faculty members losing their jobs.

The Open the Books Coalition was formed to demand the college to make its financial information public.

Hardesty said that although Hampshire College is smaller than Ithaca College, many of the financial issues and the language surrounding the layoffs at both colleges are similar.

She said that the financial crisis began in Spring 2018 when faculty members’ salaries were frozen, retirement contributions were cut and a voluntary separation program to incentivize employees leaving the college was introduced. Hardesty said that it was around this time that the faculty decided to revitalize its AAUP chapter.

Hardesty said that in 2019, the administration declared that the 2018–19 fiscal budget was balanced. However, faculty members received an email about how Hampshire was considering a merger with another college in the winter. The Board of Trustees then voted to not admit a freshman class and laid off a number of administrators.

Around this time, she said that a coalition of students, faculty, parents and alumni was formed to protest these changes. After the protest movement, Hampshire’s president and members of the Board of Trustees resigned.

She said that in order to prevent faculty layoffs, the faculty acquired legal representation and formed an agreement with the college instead.

Rather than laying off faculty, faculty members were able to take leaves of absence and work at other colleges but accrued sabbatical time to return to Hampshire. She said that retirements were incentivized, and faculty members went down to part-time hours while still having full-time benefits.

“We were able to meet the target we needed to meet, and therefore we didn’t face layoffs,” Hardesty said. “So basically, putting the power in the faculty’s hands to come up, through negotiations, … with a plan so that we wouldn’t need to do what they said was needed to do.”

She said that the COVID-19 pandemic caused the plan that Ed Wingenbach, the new president of Hampshire, created to get the college back on track to be accelerated, much like Ithaca Forever. This led to the proposal of faculty layoffs, but Wingenbach complied with AAUP regulations around financial exigency. This means that tenured faculty and entire programs can only be cut if the college is facing closure, and faculty members must be able to verify this.

Hardesty said that Wingenbach made Hampshire’s financial information available. Based on the financial information, the AAUP devised a plan, which was approved by the faculty, to take a pay cut and negotiated a voluntary separation plan. She said that the senior administration took pay cuts and some senior administration positions were eliminated. This saved the college from needing to prevent faculty cuts, but some staff positions were eliminated.

Abraham said that they are graduating and that when they think about their time at Ithaca College, the most important experience has been the relationships they have built with faculty members.

“I’ve been doing some talking to prospective students, incoming high school kids, and I have such a hard time recommending Ithaca College to them because I know that the school of next year is probably not going to be the school I went to because they’re cutting so many faculty,” they said. “It’s so heartbreaking. I love Ithaca College, and I want to be able to, without a doubt in my mind, recommend this incredible place to incoming students. With the current state of the administration, I can’t do that without reservations.”

Chavez said he thinks students need to support faculty members as much as possible. He said it is important to advocate for faculty of color. The Faculty Council is considering the addition of an amendment to the Faculty Handbook that will prevent faculty of color from being disproportionately affected by cuts, but it will not apply to the APP process.

“As POC [people of color] students, we need to have faculty members who are POC,” he said. “It’s important. It’s a necessity for us. … This is a time when solidarity is more important than ever.”

Rodriguez called for shared governance from the administration regarding the APP process.

“The governance model is somewhat fixed and not flexible,” she said. “This governance model may not have been created by those in power now, but, regardless, the model has huge impacts at this moment. Perhaps it is worth, now, to take a deep look at what the impact is and sitting down to take a look at how we can work together.”

There was a question–and–answer section for attendees to ask Hardesty about the community members’ movement at Hampshire College and how some actions can be applied to Ithaca College.

Abraham asked what students did to help to protest against layoffs.

Hardesty said that students held protests and occupied the president’s office. She also said they held a no confidence vote against the administration.

“You don’t want to pressure students,” she said. “You want to give them all the information that’s going on … but know that if there’s things that the faculty can’t do, there are things that [students] can do.

Hardesty said that a first step to take is to elect a faculty governance body to participate in a decision that financial exigency is imminent and that all measures other than faculty layoffs have been taken. She said that it should be the faculty members who decide which cuts are made and that it was very important to have access to the college’s financial information.

“This was the language that we used this past year, with a better administration, to get access to the books,” she said. “Nobody knows other administrations that have done that, but you can hold up Ed Wingenbach and be like, ‘Well, he did it.’”