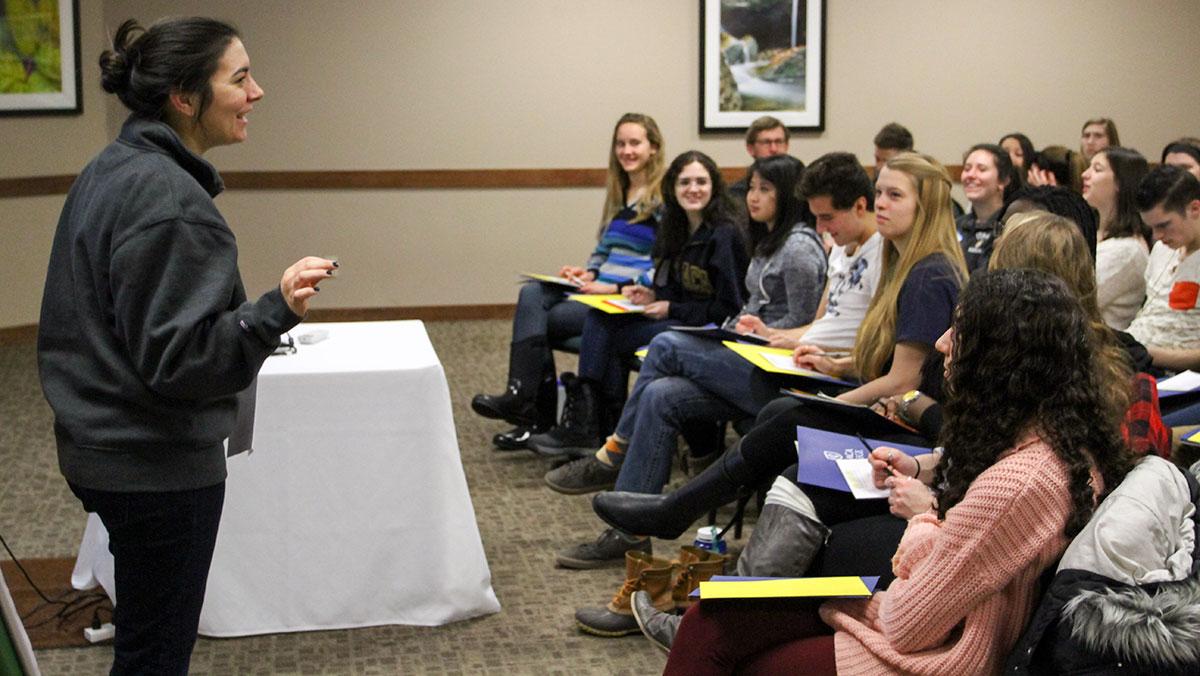 Yana Mazurkevich/ The Ithacan
Samantha Stafford, the leadership programs coordinator for the Office of Student Engagement and Multicultural affairs, leads a workshop during the Leadership Weekend.
By Shakirah Ray — Staff Writer
Published: February 18, 2015

Leadership Weekend is a two-day retreat for freshmen held by the Office of Student Engagement and Multicultural Affairs during the second weekend of February. This year, the theme of the retreat held Feb. 13–14 was “Emotional Intelligence” and how to get involved on campus.

Sarah Schupp, first-year experience programs coordinator, said the students received a book on emotional intelligence as a college student leader along with a workbook so they could learn more about their strengths and weaknesses. She said the 40 students each year are selected through an application process that annually draws 60–100 applicants on average.

The organizers designed workshops, activities and icebreakers for the students to learn about one another and how to be leaders. Freshman Ryan Opila said one of the activities involved the students each receiving a piece of paper that had one clue from a story. The goal of the activity was to piece together the story from beginning to end without sharing the clues unless someone asked them a question about it, after which the groups had to answer questions about the story.

This one particular activity was among many others that were created based on the interests of the student leadership consultants, Cammy said.

“The four of us this year kind of brought different views on leadership, and we all have really different roles on campus, so it was reflected in the work that was done,” Cammy said.

All the student leadership consultants along with the coordinators gave presentations with alike topics in mind, such as political, organizational, social and justice leadership.

“That’s what made it so unique this year in my opinion — we just had so many points of views and different ways that we kind of developed ourselves as leaders on campus and share these with the students,” Cammy said.

Murphy first became a student leadership consultant during her first semester of her junior year, a position she learned about by attending Leadership Weekend as a first-year student, she said.

“It still feels like it has the same feel as it did when I was a first-year student,” Murphy said. “I remember meeting a lot of new friends.”

As a freshman, Opila said one of the trip’s greatest benefits was getting to know like-minded people around campus.

“There was a lot of collaboration between people throughout the retreat of, ‘Oh, you’re into this? I’m interested in this as well, let’s do something about this when we get back on campus,’” Opila said.

To demonstrate this, Leadership Weekend concluded with a group discussion called “Hot Topic,” Cammy said, where students shared a topic they are passionate about. Forming into groups, they created action plans on how they can attack the topic or bring the topic to light back on Ithaca College’s campus.

“In the past, a group against fracking formed on campus because of Leadership Weekend,” Cammy said. “I’m really excited to see what kinds of results form from this retreat.”