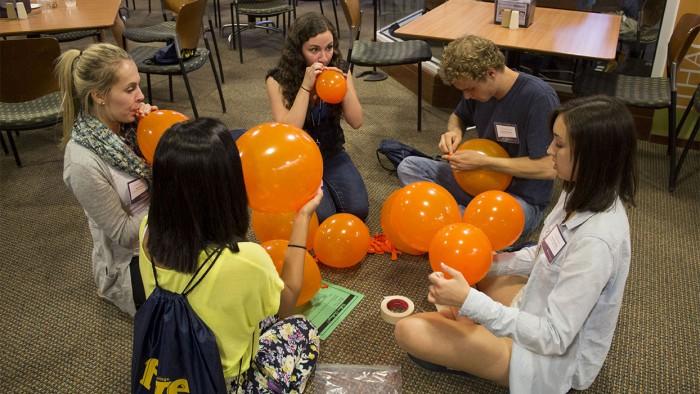 Sabrina Knight/The Ithacan
Students in the Class of 2017 participate in a balloon challenge during a social event at Orientation on June 19. The high number of first-years seeking on-campus housing in the fall is so high that the Office of Residential LIfe has had to make additional options available
By Sabrina Knight — News Editor
Published: August 8, 2013

The Office of Residential Life announced Friday that it will no longer need to house students in the Country Inn & Suites because of a miscalculation in the number of upperclassmen students requesting on-campus housing.

Bonnie Prunty, director of residential life and judicial affairs, sent an email to students who were assigned to live in the Country Inn & Suites explaining the change.

“We have been able to accomplish this without adding more temporary housing space on campus than we originally anticipated,” Prunty said.

With the number of incoming and transfer students exceeding the target that Ithaca College estimated last fall, Residential Life is currently offering alternative housing options for these students. They will include the use of extended occupancy triples, temporary living in residence hall lounges and four-person rooms in Emerson Hall. In addition, the First Year Residential Experience program will be extended to anyone who is interested.

Prunty said the college is expecting about 1,820 incoming first-year students and 130 transfers seeking on-campus housing for the fall 2013 semester.

In an email sent to first-year students and their parents on Thursday, July 18 — the night before the first round of housing selection for students in the First-Year Residential Experience program — Prunty announced that about 100 first-year students would have to live at the Country Inn & Suites. She explained in the email that the housing problem was a result of many intersecting factors: a larger-than-anticipated incoming freshman class, a higher number of returning upperclassmen who are already occupying on-campus housing, a higher retention rate among upperclassmen and a larger number of incoming transfer students who are selecting on-campus housing.

In an interview in May, Eric Maguire, vice president of enrollment and communication, said the college’s target for the incoming Class of 2017 was about 1,700. He said the goal was to have about 1,800 students send in deposits by the May 1 deadline because it accounts for a “melt” of 100 students who will decide over the summer and at the beginning of the fall semester not to enroll at the college. By the May 1 deposit deadline, Maguire said, the college received about 1,900 deposits from prospective students who decided to enroll in Fall 2013.

The Office of Enrollment Management will finalize the official number of students in the Class of 2017 by October 1, which is when most colleges and universities report the final numbers after “melt” and withdrawal. In the beginning of May, Maguire said the finalized number should be between 1,770 to 1,800 students in the Class of 2017, which still exceeds the original target of 1,700.

In fall 2012, Residential Life underestimated the number of returning students wanting to live on campus for the 2013-14 academic year and the size of the incoming Class of 2017, Prunty said. The office reviewed applications and placed about 160 upperclassmen on a waiting list for off-campus approval. But by the time the office received notice in May that the size of the first-year class was shaping up to be larger than expected, Prunty said, students who the office granted permission to move off campus for fall 2013 were no longer interested.

This year, rising sophomores chose their housing on July 12, which Prunty said was later than in previous years because Residential Life wanted more time for the number of rising sophomores wanting on-campus housing to decrease. However, Prunty said about 100 more sophomores chose on-campus housing that day than the office previously accounted for. As a result, the number of sophomores, juniors and seniors continuing to live on campus this year is higher than in years past, which Prunty said posed a problem for first-year housing selection.

Because Ithaca College guarantees students on-campus housing for all four years, Prunty said, using extended occupancy triples and converting lounges into rooms will help follow through on that guarantee.

Extended occupancy triples, as defined in Prunty’s email to students, are “larger double rooms where we have added a third set of furniture.” Residence hall lounges will be converted into rooms to accommodate three to five students, and will be “private, lockable, and furnished with a bed, desk, desk chair, wardrobe and dresser for each student.” Students living in extended occupancy triples will receive a rebate of $748 for each semester, a free microfridge and free basic cable.

To begin solving the temporary housing situation, Prunty said students who are unhappy with their living condition will be given first priority to move into more permanent residences. Prunty said when permanent spots become available, students living in lounges will be asked to move first so students living in dorm rooms can use the space as a communal area. Transfers will be offered vacancies in on-campus apartments and other housing options that are not meant for first-years.