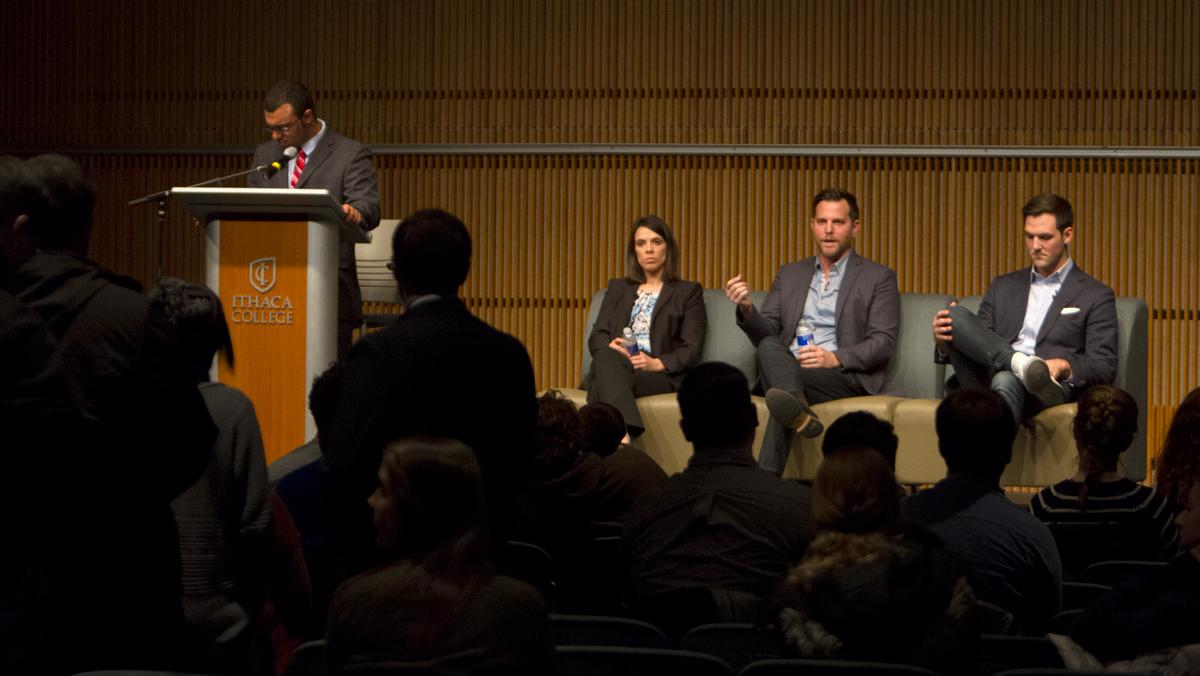 Over 100 people from the Ithaca community attended a panel on free speech and how it manifests on politically charged college campuses Feb. 8 in Emerson Suites.

The panel, hosted by IC Republicans and IC Young Americans for Liberty, consisted of Dave Rubin, political commentator and host of “The Rubin Report” talk show; Cabot Phillips, conservative political activist; and Angela Rulffes, assistant professor in the Department of Communication Studies. The panel discussed suppression of free speech on college campuses, net neutrality and other topics. Senior Caleb Slater, president of the IC Republicans, led the Q&A portion of the panel.

Elaina White, treasurer of IC Republicans, said they held the event to increase awareness of the club and to get more students involved. Additionally, she said the club did not want to invite a speaker who would be very controversial.

“We knew Dave Rubin wouldn’t be a very controversial speaker and we were trying to bring positivity towards our club, rather than negativity,” White said. “We thought it would be good, especially incorporating the students, doing like free questions on the floor. We really just want to get the community and students involved.”

The club received a lot of positive feedback from students and administrators, White said.

Phillips said that he believes conservative views are being suppressed by liberals on college campuses.

“My main goal is to get as many people talking about what is going on as possible,” Phillips said. “I think we need to be honest about who is perpetuating the problem, and it’s coming from the left. What we see are conservatives afraid to speak up for fear of being ostracized socially, fear of having their grades docked.”

Free speech on campus has received increasing attention as protests have met controversial speakers. In March 2017, conservative social scientist Charles Murray, who believes blacks and Latinos are genetically inferior to whites, was unable to speak at Middlebury College due to a large group of student protesters. In December 2016, a professor at Orange County Coast College was unable to hold classes during the last week of the semester because she was receiving threats from right-wing students after of a video surfaced of her expressing hatred for then–President elect Donald Trump in her classroom.

Rulffes said it is critical to educate people about the importance of having free speech. She said she believes it is threatened by our current political climate because people with opposing viewpoints are shutting each other down.

“I think it’s important for students to understand that this is the most critical right you have, and you need to respect it because you don’t want to lose it,” Rulffes said. “People think it’s in their free speech right to try and shut down someone else and then celebrating that when actually what they’re doing is shutting down free speech.”

In regard to a discussion about repealing net neutrality, which allows Internet service providers to give preferential treatment to different kinds of data, Philips said that he thinks the act is an example of government overreach. The decision to regulate the Internet should not be made by the government. It should rely on the open market, Phillips said.

“For so long the government came in saying net neutrality sounds nice, it’s good, as they do with all things,” Phillips said. “But they use these nice-sounding phrases to institute their will over private businesses, which I think is a problem.”

“I thought it was cool that it was more conservative figures, at least that was the idea I think, maybe more controversial,” Wolcott said.

Junior Madeline Lester said she went to the event to be exposed to alternative perspectives.

“I think it’s important to go to events like this to get a better perspective of the other side so you can exercise unbiased reporting,” Lester said. “You can have a better understanding of different people’s perspectives, because pretending like the other side of the argument doesn’t exist isn’t productive and wouldn’t be good journalism.”