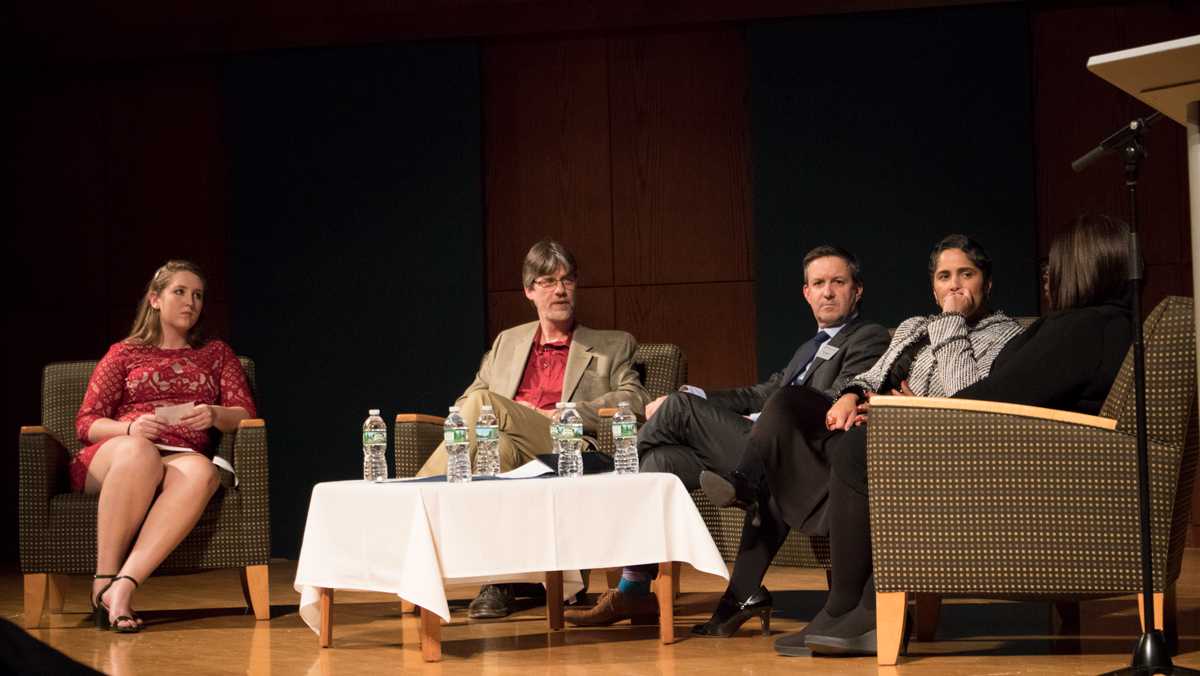 The Ithaca College Board of Trustees held a panel Feb. 14 to discuss trends in higher education, including its purpose, demographics and the importance of social capital networks for students.

Collado said she wanted the campus community, not just the board, to have the opportunity to listen in on conversations regarding higher education.

Elletson began by asking the panelists how students can feel better prepared for life after their undergraduate career and the role faculty and staff have in this preparation.

Collado stressed the importance of a liberal arts education being integrated with a professional education.

“I think we have many students here who would say they’re learning by doing, but the foundation of that, the root of that, is the power of being liberally educated,” she said.

Collado also said it is important for colleges to focus on providing the community with a public good. She said it is the job of educators to equip students with the tools to feel empowered to do meaningful work instead of solely focusing on getting a job after college.

Selingo, former editor of the Chronicle of Higher Education, said there is a disconnect between those in higher education and the workforce. He said he finds that the largest gap is in soft skills, which include navigating ambiguity, teamwork and problem–solving. Residential colleges do a good job of helping students foster these skills, but students need to take the initiative beyond simply attending class, he said.

“Too many students, I think, are spectators to their college experience,” Selingo said.

“We have to learn and actively work across sectors of higher ed to share resources and be more innovative,” Collado said.

Elletson asked the panel about the future of higher education, since many of those in leadership positions are baby boomers.

“I think we do a disservice to individuals when we want to tie their ability to lead to their age,” she said.

Elletson then asked the panelists what they think the demographics of students will look like in the coming years.

Montague said she thinks there will be more adult students and economically underrepresented students. She said it will be challenging for institutions to assist these students and help them succeed in college.

Selingo said he thinks society has a cultural attachment to college and sees it as a set track from high school to a career. Selingo said not everyone has to follow the traditional path, and it is important to consider alternatives for students, such as apprenticeships or co-ops.

“There are days that I drown with students coming and wanting to talk to me because they have not seen a leader who they identify with who looks like them,” she said. “I’m doing all I can to encourage them, support them and get them connected.”

Elletson closed the conversation by asking how students and colleges can change the notion that higher education is for a private good.

Montague said that this notion is present but that it is necessary to realize that college is for the public good. The panelists acknowledged that it is difficult to accept this sentiment with the rising costs of education and that some individuals feel cheated when they have to pay for college and others do not because they have earned scholarships.

The panel ended with a Q&A during which the panelists echoed the importance of intentional connections between the classroom and life after college. Collado acknowledged the challenges students face in being too busy to make significant connections with one another as well as the challenges for administrators trying to connect with the student body.

“I think it’s really hard to be present as a human being and seen as a person fully when you’re trying to do a job that’s very public,” Collado said.

Maura Donovan, associate director for regional programs in the Department of Alumni Relations, said she is also pursuing a doctorate at the college. She said she found the discussion to be informative both as a staff member and a student at the college.

“I learned a lot and had some great insight,” Donovan said. “I mean, higher education is going to do nothing but get better and better.”

Giovanni Isaacs, a residence director at Tompkins Cortland Community College, said he thinks conversations like these are important first steps for higher education institutions to take when considering their relationships with their students.

“A lot of the time they spent addressing the growing trend of increase in student needs and what the expectation is of the student coming into college and how that expectation and perception helps shape their experience,” Isaacs said. “That’s a conversation we’ve been needing to have.”

Editor’s Note: Elletson is a staff writer for The Ithacan.