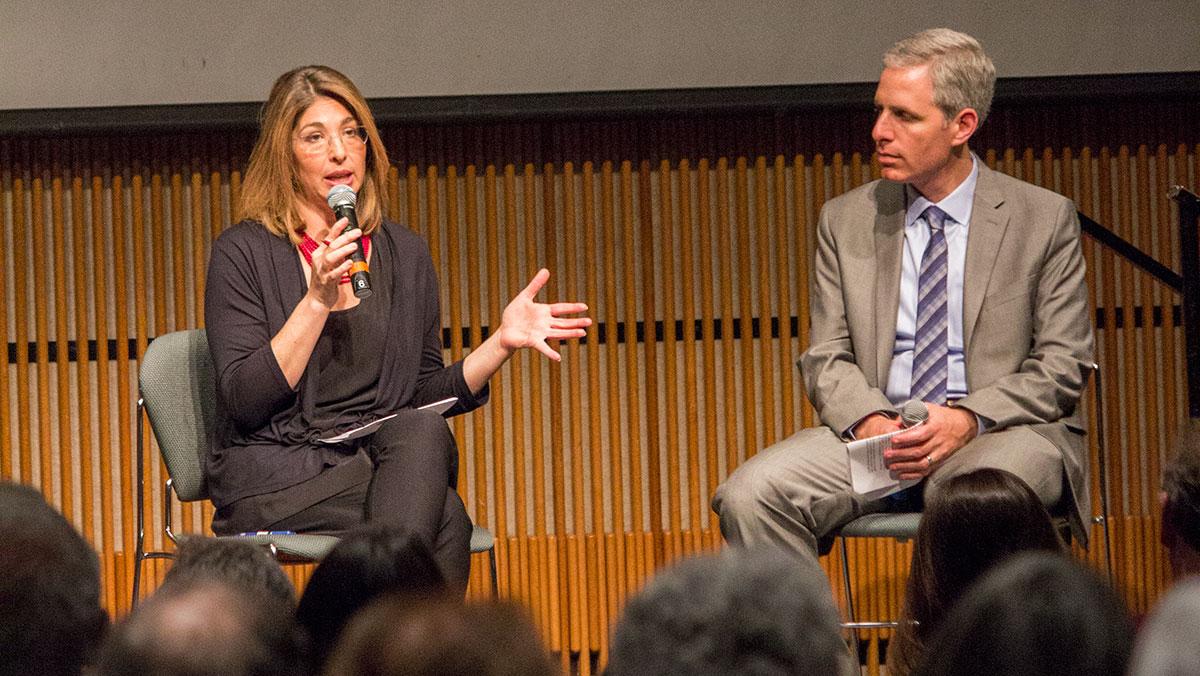 Kellie Hodson/ The Ithacan
From left, Naomi Klein and David Sirota were both awarded the Izzy Award from the Park Center for Independent Media.
By Faith Meckley — Staff Writer
Published: April 16, 2015

The seventh annual Izzy Award ceremony honored Naomi Klein and David Sirota for outstanding achievement in independent journalism April 15 in Emerson Suites. The awards were presented in front of a full audience of students, faculty and members of the broader Ithaca community.

The Park Center for Independent Media, founded by Jeff Cohen, director and associate professor in the Department of Journalism, gives out the award each year. The award is named for I.F. “Izzy” Stone, a muckraker who focused on issues like racism, McCarthyism and war in I.F. Stone’s Weekly from 1953–71.

Sirota was recognized for the dozens of exposes he wrote in 2014 for PandoDaily and International Business Times about corruption in the United States’ $3 trillion pension system. His work resulted in PBS returning a $3.5 million donation from a wealthy anti-pension activist to fund coverage of the pension issue.

Klein, a board member of the environmental organization 350.org, was recognized for her 2014 book, “This Changes Everything: Capitalism vs. the Climate,” which received praise from The New York Times as being the “most momentous and contentious environmental book” since Rachel Carson’s “Silent Spring.”

Cohen said out of all the effort needed to organize the Izzy Awards, the most intensive part was selecting the recipients out of many impressive nominations. Cohen said it was Klein’s ability to synthesize big issues and Sirota’s ability to put out a high volume of investigative work that clinched the award for both of them.

Cohen judged the nominations with Linda Jue, director, and executive editor of the G.W. Williams Center for Independent Journalism, and Robert W. McChesney, author and University of Illinois professor.

Both Sirota and Klein gave speeches after being introduced and receiving their award plaques.

In her speech, Klein talked about her grandparents, who she said would have been prouder than anyone else’s grandparents about this award. She said her grandfather, who worked for The Walt Disney Co., was fired after organizing the first animator’s strike when her father was 3 years old. Klein said her grandfather would read newspapers and journals out loud to her grandmother and their children.

In his speech, Sirota discussed the difference between news media and journalism. He said conventional news was recording an event without critical reporting.

“News is something that is handed to you,” Sirota said. “News is not journalism unto itself. Journalism is … looking where the spotlight is not. What does the reader not know that the reader needs to know?”

Sirota said his best stories have come from digging through publicly available information rather than receiving an exclusive tip.

In his speech, Sirota said his job was “to simply inform,” and he trusts that an informed population will make the right decisions for itself. Klein said an article on its own won’t go anywhere.

“It isn’t just enough to get the facts out,” Klein said. “It’s not just muckraking, it’s the combination of the digging … and seeing that project as a part of social change.”

In her speech, Klein cited the Ithaca area’s movement against hydraulic fracturing and the student movement to divest colleges and universities from fossil fuels as examples of tactics used to address information exposed through journalism.

Cohen said the typical wording on the Izzy Award plaque was altered for Klein to describe her work as “transformative.”

“We agonized over, ‘How do you explain what she does?’” Cohen said. “Her journalism is truly transformative, and that’s why her plaque is somewhat different than the normal plaque.”