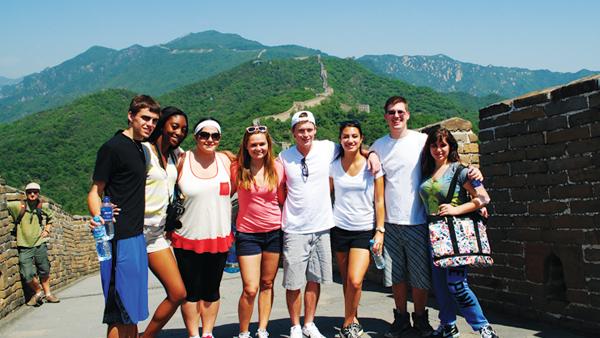 Courtesy of Jackelyn Branco
Business students stand on the the Great Wall of China during the School of Business's study abroad trip in the summer of 2011.
By Michael Tkaczevski — Staff Writer
Published: March 28, 2013

In anticipation of the creation of a China center, Ithaca College faculty have designed study abroad programs to prepare students for possible careers in the nation with the fastest growing economy in the world.

Recent developments in plans for the center in China, which is part of the college’s IC 20/20 strategic plan, have inspired professors and staff to organize study abroad programs to give students a better understanding of Chinese business culture.

According to a 2012 article in IC View written by President Tom Rochon, he and other staff and board of trustees members of the college traveled to China last year to visit 12 universities in five cities to discuss the creation of the China center with potential partners.

Rochon said in an email that the college can’t disclose any details about the China center, because the college and a prospective Chinese university would need to develop the center’s features together. In general, the China center will provide students with courses and help them find internships while abroad, Rochon said.

Marisa Kelly, provost and vice president of academic affairs, said professors have also taken the initiative to form connections with Chinese universities, which she said will be crucial in establishing a China center.

“It’s very much an organic situation,” Kelly said. “Moving forward with the center in China will institutionalize [those connections] to a much greater degree than has been the case before.”

John Williamson, former chief economist for South Asia at the World Bank from 1996 to 1999, said in an essay in the January 2012 issue of Asia Policy, a scholarly journal published by the National Bureau of Asian Research, that China’s recent explosion of economic growth is thanks to its strategy of reaching out to developing nations apolitically, which Williamson called “the Beijing Consensus.”

Isaac Kardon, a teaching assistant at Cornell University and a Ph.D. candidate for Chinese politics, said American students who form professional relationships with Chinese businesspeople will be more valuable to the American economy.

“The more you can respect, appreciate and understand where people are coming from … [the more] it builds an individual into a more thoughtful, sensitive, well-rounded person,” Kardon said. “At a macro level, it also makes it easier to reduce conflict at an international level.”

In 2007, before IC 20/20 was on the table, Guan Hongwei, associate professor in the department of health promotion and physical education, and Nicholas Quarrier, clinical associate professor in the department of physical therapy, organized the School of Health Sciences and Human Performance’s two-week summer study abroad program in association with four Chinese universities, including Beijing Sport University, where Guan graduated and worked before coming to Ithaca College in 2005.

There have been five student groups to China since 2007, including a group that went during the 2008 Beijing Olympics. The program teaches students about Eastern medicine, such as acupuncture, massage and Tai Chi, with hands-on lessons in which Americans and Chinese students work together, Guan and Quarrier said.

“Many of the students are still in contact with the Chinese students, and that makes a huge difference, which our students value very much,” he said.

Quarrier said the program also teaches American students about Chinese culture, and the exposure to a different society makes them better global citizens.

“When we go there, we’re not tourists,” Quarrier said. “We’re students, and if anything, we’re ambassadors of the USA. Half of the trip is in the classroom, and half the trip is cultural events.”

In 2011, Guan and Quarrier traveled to China again with Hormoz Movassaghi, professor of finance and international business, and Walter Smith, chairman of the college’s board of trustees’ educational policy committee. They visited eight universities to explore faculty and student exchange agreements and more study abroad opportunities, Movassaghi said.

“One of the broad strategic goals of IC 20/20 is educating a global citizen,” Movassaghi said. “We saw that this fit in with the goals of the School of Business.”

“The most important thing for the students was being able to see for themselves firsthand the reality of China, in terms of both the economic successes … and the challenges it has encountered,” Movassaghi said.

Senior TierraNicole Taylor was part of the School of Business’s study abroad program last summer. Taylor said the preparatory courses and the experience in China taught her the necessity of understanding both Chinese and American business culture.

“Chinese business culture is definitely built upon the development of interpersonal relationships,” Taylor said. “In order for you to get them to sign the contract and agree with the terms, you have to spend time with them.”

Junior Jackelyn Branco, who was also in the student group as a rising junior, said she wants to return to China and pursue a career there.

“As a business student, it was the smartest decision I’ve ever made,” Branco said. “The business world is so international now, and China is really a leader now … and it’s only getting stronger.”