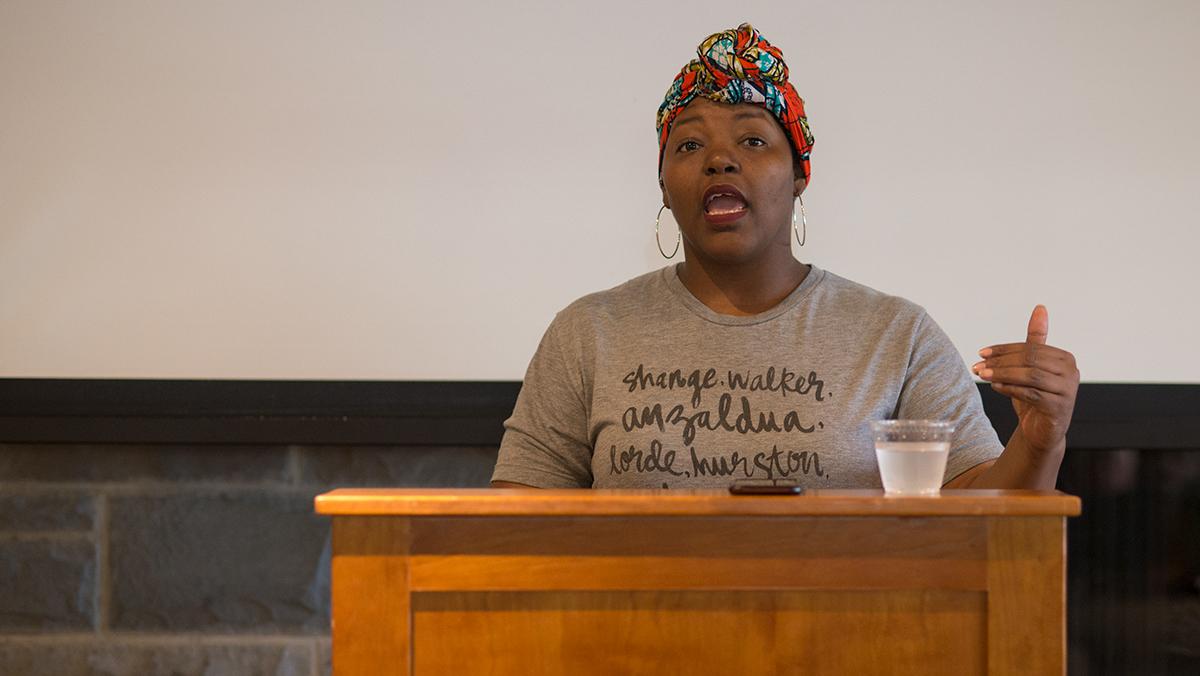 Fernando Ferraz/The Ithacan
Mahogany Browne, a poet, read her poetry and answered questions as apart of the Imminent Generation Discussion Series through the Center for the Study of Culture, Race and Ethnicity, on April 4 in Klingenstein Lounge.
By Bianca Mestiza — Staff Writer
Published: April 5, 2017

Continuing the Imminent Generation Discussion Series through the Center for the Study of Culture, Race and Ethnicity, on April 4, Browne — a mentor for young artists and writers — spoke to members of the Ithaca College community about the struggles and achievements of Generation Z, the namesake of her talk.

Browne is an alumnus of Cave Canem, a literary organization supporting African–American poets; Poets House, a poetry library in New York City with more than 70,000 poetry volumes; and AIR Serenbe, a nonprofit artist residency program in Georgia. She has published books, including one that was recently nominated for an NAACP Image Award for Outstanding Literary Works. Currently, she is a mentor and host for the Urban NYC, an organization that helps inspire young writers with literary art education in the areas of creative writing, spoken word, playwriting, college prep, literature and hip-hop.

With the transition from one generation to the next entering college — from millennials to Generation Z — Belisa Gonzalez, associate professor and director of the CSCRE, said the CSCRE Discussion Series committee wanted there to be a focus on youth in this year’s discussion series. She also said the faculty members who were putting the events together for the semester were trying not to have all presenters be academic speakers, looking instead to activist organizations.

“We … got recommended to look into the organization that Mahogany worked with, and that was how we were able to get her to come speak,” she said.

Browne began her presentation by reciting five of her poems and followed with a Q&A in which students asked her about her writing preferences and where she gets her inspiration from.

Browne spoke about young people and how often they are seen and not heard. She said people should listen to them more — oftentimes, she said, the people who are supposed to be teaching the youth are the ones working against them.

Senior Dillon Randolph said he heard about the event from one of his friends and thought it would be interesting to come since he has read some of Browne’s work before.

“I thought her performance was dope; after seeing her perform, it makes me want to continue reading her work,” he said.

Browne said she chose to start off her talk by reading poems because they are a good way to start conversation and get people thinking.

“I think poems are important to open and close events,” she said. “I want to leave people with something to walk away with.”

Freshman Aine Holland said this was the first time that she has come to a CSCRE event. She came because of her Cultural Encounters class as part of the Honors Program, which encourages students to attend more events.

“I thought it was very powerful, I really enjoyed it,” she said. “She really connected. Like, she was very open and inviting, and it just felt more welcoming and empowering.”

Browne said she did not have something specific for students to take away and that the event was more about her sharing her work and sharing how her experiences shaped her as a writer.

“I’m interested in conversations that make me think differently about how I process ideas and trauma and life, and I think when you have conversations with college students and high school students, you’re always asked to reimagine yourself as an adult, a young person, and it just makes you more humble, I think,” she said. “I try to remain humble and open to experience.”

The final event of the series will be presented by the Martin Luther King Scholars in the presentation Now is Our Time at noon April 27 in the Clark Lounge.