The Ithaca Police Department has already arrested one person for unlawful smoking on The Commons after citywide restrictions on public smoking went into effect earlier this month, according to the Ithaca City Clerk’s Office.

On Aug. 1, smoking in many public areas across the city of Ithaca became prohibited. The ban has been in the works since 2008 and was approved by the Ithaca Common Council by a 9-1 vote April 7.

The ban is one of the most expansive city ordinances in New York state to restrict smoking in public areas. The IPD did not release specifics on how many people have been cited. 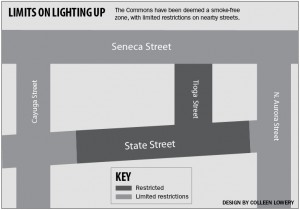 Anyone found in violation of the ordinance could face a $75 fine for their first offense, a $150 fine for a second offense and a $250 fine for any further infractions.

The reasoning behind the outdoor smoking ban was to “reduce the proximate exposure of the public, especially children, to the hazards and annoyance of secondhand tobacco smoke,” according to the text of the legislation.

Alderman Svante Myrick said the community’s wellness was the council’s reason for enacting the law.

“All of our motivation was the health and comfort of everyone who lives in Ithaca and everyone who visits Ithaca,” Myrick said. “Before, the law was on the side of the smokers, and those who didn’t smoke had no rights in attempting to make the air they breathe any cleaner.”

Myrick said though the Common Council did not enact the ordinance to decrease the saturation of smokers on The Commons, it would be a welcome effect.

“[Reducing the number of smokers] is not what we intended this law to do; however, if because of this law there are fewer smokers, then that is not a bad thing at all,” he said.

Alderwoman Ellen McCollister was the sole vote of opposition to the ordinance on the Common Council. She said maintaining the ban could prove to be more of a hassle than anything else.

“[The smoking ban] is so expansive that I have a philosophical and practical problem with placing something that is going to be too hard to enforce on the books,” she said.

The part of the new smoking ban that could affect residents the most is the smoking limitations on The Commons. The walkways are now a smoke-free zone. Common Council members hotly debated the placement of the restrictions on the area, as the pedestrian thoroughfare draws residents, students and visitors.

The only areas where smoking is now tolerated on The Commons are the entrances on Aurora, Seneca and Cayuga streets.

McCollister said restricting smoking to just the entrances would create a new problem on The Commons, rather than alleviate one.

“Unfortunately the ban is just going to cluster smokers at the entrances,” she said.

Justin McGuire, owner of Bella Pizza in Center Ithaca on The Commons, said the ban could actually be detrimental to his business flow.

“I 100 percent disagree with [the ban],” McGuire said. “I am a business owner, and any reason to drive customers away from The Commons just doesn’t make sense to me.”

On the other hand, Gary Ferguson, executive director of the Downtown Ithaca Alliance, a not-for-profit organization that handles development, promotion and management downtown, said the new ban could serve as a positive model for other cities across New York state.

“Ithaca tends to be at the front edge of a lot of leading topics and issues,” he said. “It wouldn’t surprise me to see more cities take a look at the ban.”

Ted Schiele, coordinator of Tobacco Free Tompkins, a program of the Tompkins County Health Department, said he and his co-workers have noticed a decline in public smoking since the ban went into effect.

“I have been down on The Commons on about five different occasions since the ban went into effect,” Schiele said. “It is a different place, just in that you are able to walk around without smoke being everywhere.”

Schiele said Tobacco Free Tompkins will host an event in celebration of the ban at 5 p.m. tonight under the Bernie Milton Pavilion on The Commons.