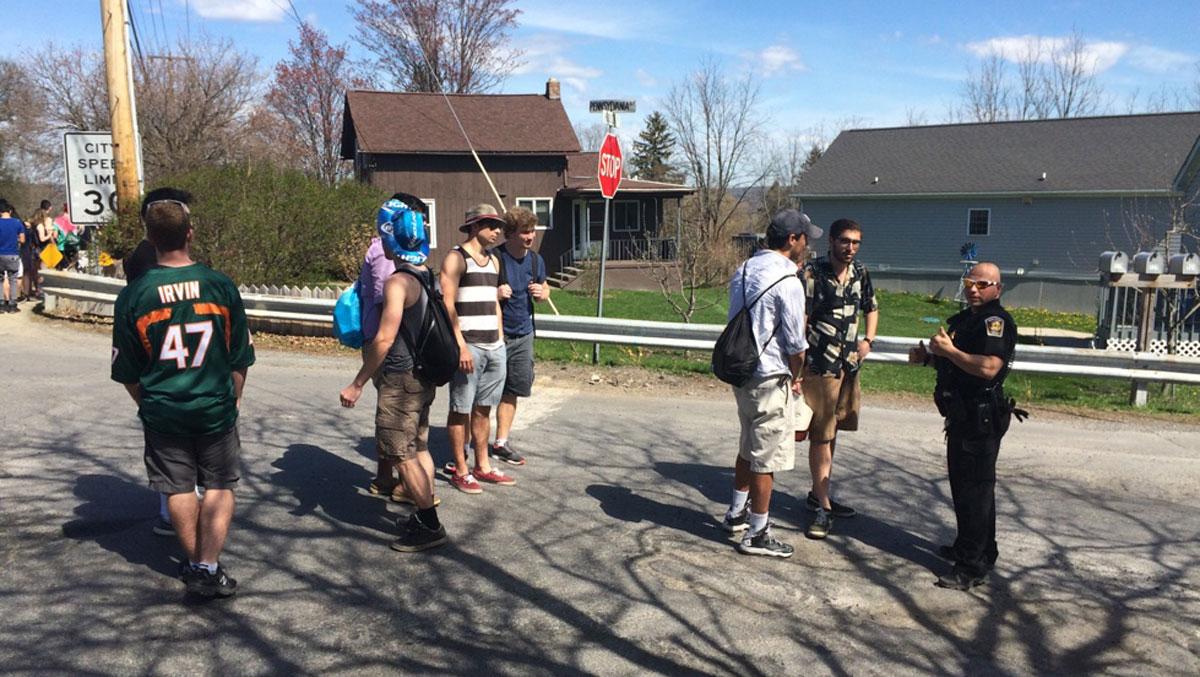 After initially blocking students from Kendall Avenue during the morning, police allowed the annual Kendall Day celebration to continue before breaking up the party  just after 2PM May 2.

Lieutenant Dan Donahue of the Tompkins County Sheriff’s Office said that too many people were throwing bottles, causing the police to break-up the party.

Police officers from both the Ithaca Police Department and Tompkins County Sheriff’s Office were initially positioned on the corner of Coddington Road and Pennsylvania Avenue earlier this morning, preventing students from reaching Kendall Avenue, telling them to party on campus instead. However, at around 11:25 a.m police started allowing students onto Kendall Avenue. Kendall Day is the annual party that occurs the weekend before finals, in which students go to Kendall Avenue to celebrate the end of classes. Kendall Avenue is located near the west entrance of the college off of Pennsylvania Avenue near Hudson Street.

Donahue said they initially were trying to stop an onslaught of students all at once onto Kendall.

“The reason we changed it is because there’s just too many students to stop,” he said. “So what we’re going to do is take it on a case-by-case basis. As long as everybody’s well behaved and fine and adhering to all laws and local laws, we’ll leave everybody alone. It’s when people start getting intoxicated and it gets a little bit hotter and people start acting less than responsible, that’s when we have to deal with it.”

Sophomore Chris Reyes was turned away from Kendall Avenue. Reyes said a police officer told him that the college should be hosting the party, not making it the responsibility of the city. 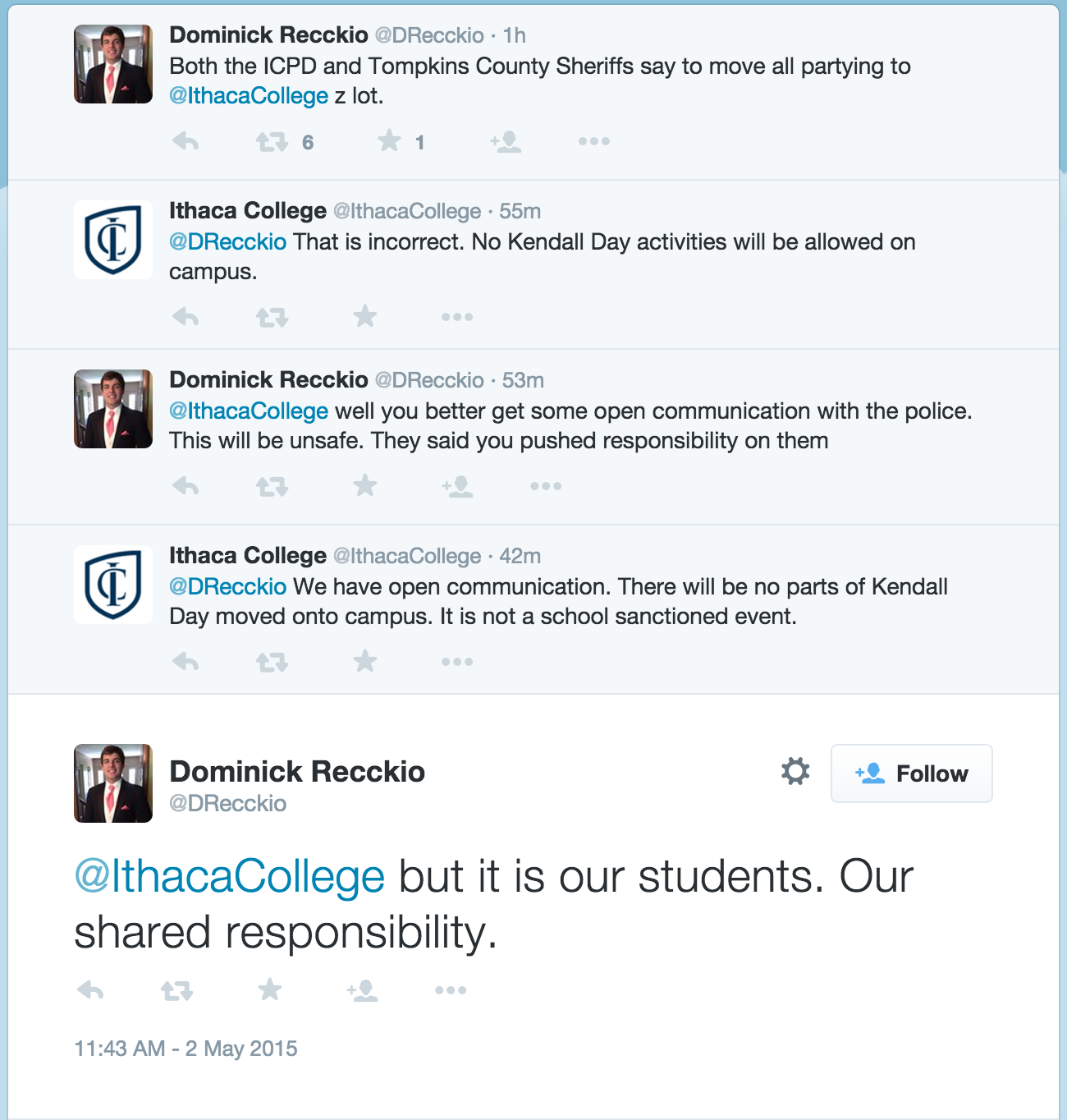 Junior Dominick Recckio, who was recently elected as the new president of the Student Government Association, said police told partygoers to go party on Ithaca College’s Z-Lot. After he tweeted this information, the @IthacaCollege twitter account tweeted “That is Incorrect. No Kendall Day activities will be allowed on campus”. To this tweet, Recckio replied, “well you better get some open communication with the police. This will be unsafe. They said you pushed responsibility on them.”

The Ithaca College account refuted this claim in it’s next tweet, saying “We have open communication. There will be no parts of Kendall Day moved onto campus. It is not a school sanctioned event.” To this tweet, Recckio replied, “but it is our students. Our shared responsibility.” Recckio said he thought the police backed off when the college refused to host Kendall Day events on campus. 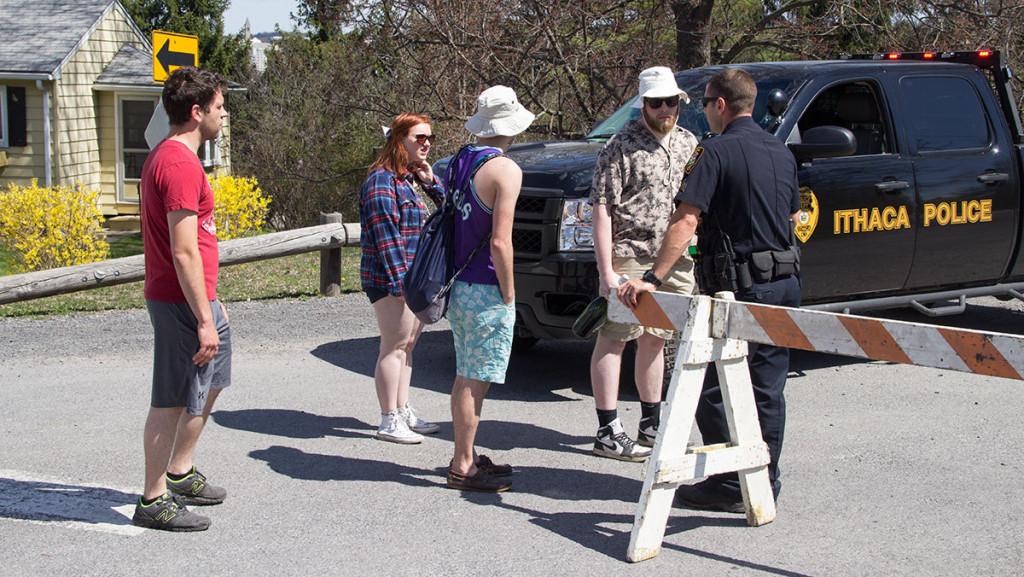 Students turned away from Kendall Day, May 2. Corey Hess/The Ithacan 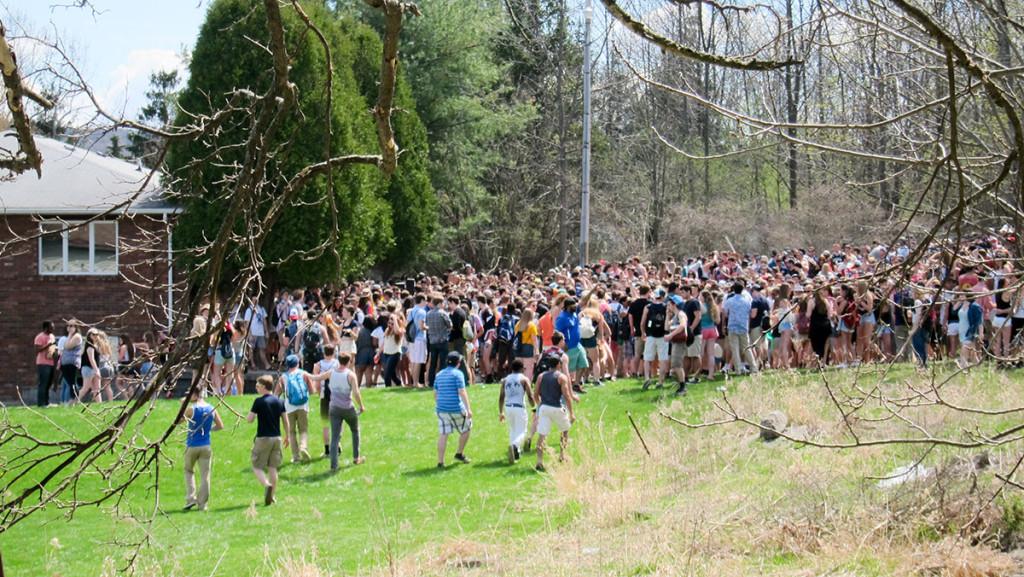 Students successfully get to Kendall Day, May 2. Faith Meckley/The Ithacan