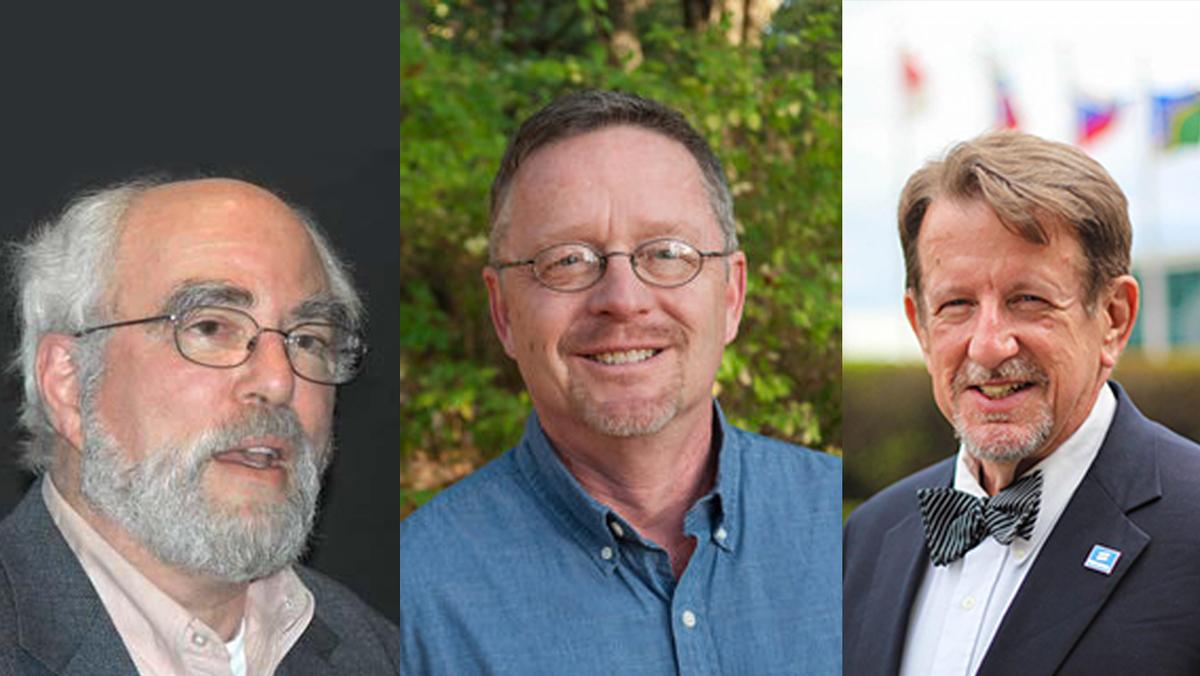 Photos courtesy of The Institude for Policy Studies, Ithaca College and The Unitarian Universalist Association
From left, Joseph Gerson, director of the Peace and Economic Security Program at the American Friends Service Committee; Chip Gagnon, professor in the Department of Politics; and Bruce Knotts, director of the Unitarian Universalist Office at the United Nations.
By Caitlin Holtzman — Assistant News Editor
Published: May 16, 2020

Global policy experts spoke to the Ithaca College community to discuss the impact of the coronavirus pandemic on international politics.

Peace Action Ithaca College hosted the panel “World Peace in the COVID-19 Pandemic” on May 1. The panel included Chip Gagnon, professor in the Department of Politics; Bruce Knotts, director of the Unitarian Universalist Office at the United Nations (U.N.); and Joseph Gerson, director of the Peace and Economic Security Program at the American Friends Service Committee. Approximately 13 people attended the event, which was held over Zoom.

The novel coronavirus disease, officially named COVID-19, was first reported in Wuhan, China, in December 2019. On March 11, the World Health Organization (WHO) declared COVID-19 a pandemic. As of May 14, there are 4,420,743 cases globally, 301,160 deaths and 1,578,135 recoveries, according to the Johns Hopkins Coronavirus Resource Center.

Gagnon said he thinks other countries, like China, are handling the response better than the U.S. The Chinese government implemented a lockdown of Wuhan and five other cities Jan. 23. It shut down all transportation in and out of the city and canceled all classes for schools and universities. Stores also closed, except for ones that sold medicine or groceries.

Gerson discussed how different governments have exercised their powers during this crisis.

“Donald Trump is claiming he has absolute power,” Gerson said. “Trump has been attempting to bend state governments to his will.”

While China used its authoritarian-style government to help to contain the virus, Gerson said some countries, like Hungary, are using the virus to enforce dictatorial-type power. In Hungary, Prime Minister Viktor Orbán enacted a law March 30 that will suspend elections and give him the power to rule indefinitely.

Changes, like political imbalances, that were already happening in countries — or had not started yet — are beginning because of the health crisis, Gerson said.

Knotts discussed the U.N.’s efforts in curtailing the violent actions that could come about as a result of the pandemic. U.N. Secretary-General António Guterres called for a global ceasefire and asked the U.N. Security Council to endorse the ceasefire. There are 15 members of the Security Council and only three of them — the U.S., Russia and China — are not endorsing the ceasefire.

“The conflict between China and the United States makes it impossible for the Security Council to do its job,” Knotts said.

The U.N. and the WHO have been working to recruit medical experts to work on solutions and to develop testing kits, Knotts said. Still, there has been some disconnect among agencies. Knotts said the Centers for Disease Control and Prevention made its own tests without following the protocol published by the WHO. The tests turned out to be faulty because of contamination.

“We are not going to come out of this with people thinking we are the exceptional nation,” Knotts said.