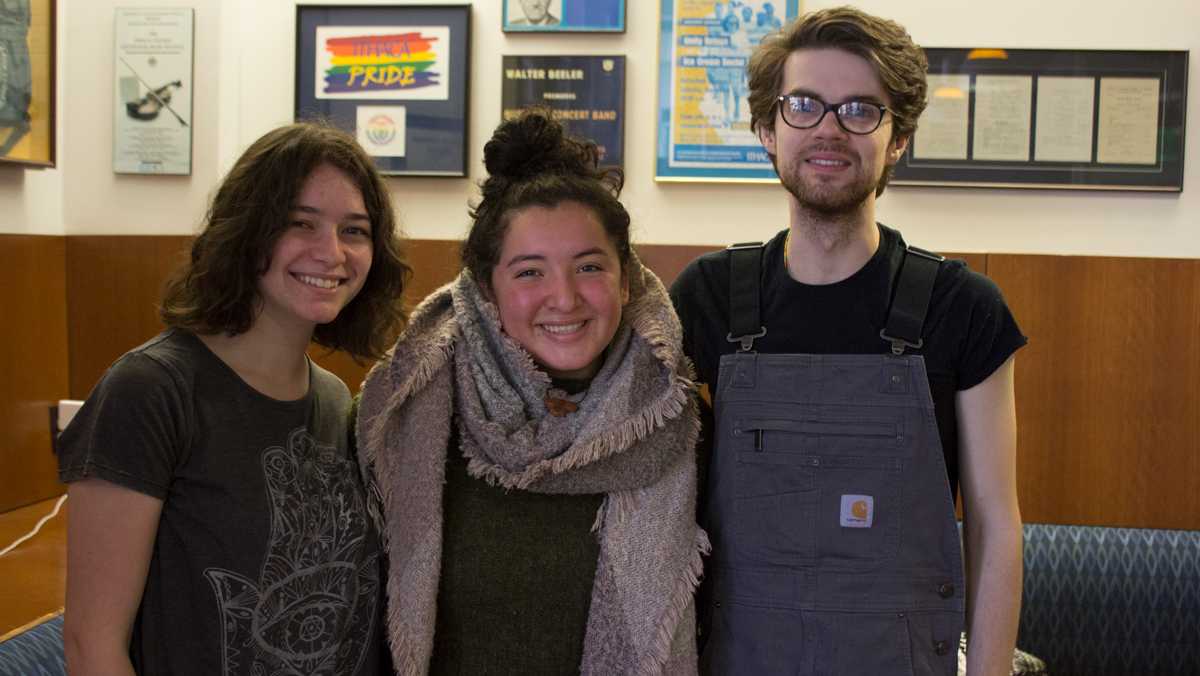 This was the conclusion to The Poor People’s Campaign at Ithaca College’s first campus-wide event, open to the college and surrounding community. The event was an introductory meeting and featured a screening of the documentary “At the River I Stand.”

Freshman Daniela Rivero, a student leader of the PPC, said the college’s branch of the campaign formed in Spring 2018 immediately after the MLK workshop. Alicia Swords, associate professor in the Department of Sociology and Honors Program director, asked her and some other students to speak at the PPC workshop for MLK Week on Jan. 23. Swords was Rivero’s professor for her freshman seminar, Stories for a Change, in Fall 2017.

After the workshop, Rivero said, she and the other students decided they wanted to form a PPC branch at the college.

The student organization currently has four student leaders: freshmen Avital Abraham and Rivero, sophomore Kelly Madden and senior Ryan Kresge. They meet weekly to plan events and ways to advertise themselves on campus.

Swords said she brought students to an event where the organizers of the PPC, including Rev. William Barber II and Rev. Liz Theoharis, co-chairs of the PPC, spoke in Binghamton on Oct. 17 through 18.

The attendants at the screening had the opportunity to sign up for their email lists and pledge to the national campaign. A significant number of the attendants were from outside of the college community and have been a part of the larger regional meetings of the PPC, which have occurred in neighboring towns such as Elmira and Binghamton.

Freshman Sarah Casey, who attended the event, said she learned a lot about the campaign at the screening.

“It ended up being a really powerful thing for me to go to,” Casey said. “I think it was a very good opportunity for everyone, for the whole community, to come out and see what it is.”

Freshman Elizabeth Carroll, a cello performance major who attended, said she enjoyed learning about the campaign because it connects to a current project that she is working on about female composers of color.

“I thought it was really awesome, and it’s important, and it connects to what I’m doing in my musical studies,” Carroll said. “It was a really warm environment.”

Jan Quarles, a community organizer who has worked for organizations such as We Are Seneca Lake and Don’t Frack New York, said she believes PPC is important because students are advocating for social change.

“My hopes are with the young people,” Quarles said. “I’m so proud of them for stepping up for these causes.”

In addition to the documentary screening, Rivero said, the college’s branch is also collaborating with Cornell University’s Committee on U.S.–Latin American Relations to host a workshop on The Commons on March 23. The workshop will have speakers and student-led discussions about racism, poverty, ecological issues and the war economy, Rivero said. Manolo de los Santos, an active member in both the PPC and CUSLAR, will be speaking.

The national PPC will be protesting near legislative buildings for six weeks from May 13 to June 19. Rivero said PPC at the college is unsure if they will participate.

Abraham said she believes it is important for college students to be aware of the campaign and act on its behalf because of the history of college students’ effect on national social movements.

Rivero said she believes the movement is different because of its focus on social change beyond American politics.

“I think it’s definitely a very timely movement, especially given how our country right now is so politically polarized,” Rivero said. “It doesn’t describe an enemy as a person — it’s not like Republicans or it’s not people that vote a certain way — and it’s not about beating anyone, it’s more about restructuring a system that kind of allows for all of these things to continue.”