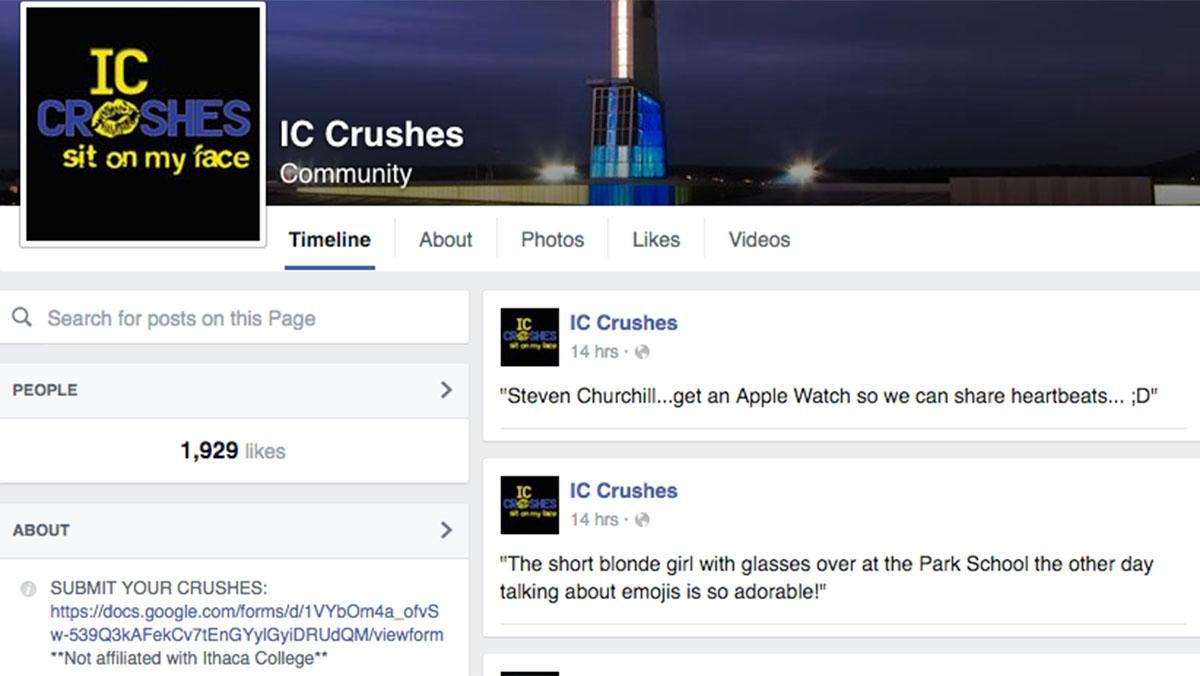 Screenshot of IC Crushes Facebook page
A popular Twitter account used by Ithaca College students — IC Crushes — was suspended the morning of April 18. IC Crushes is a Twitter account that allowed students to submit “crushes” about other students anonymously through a Google document.
By Grace Elletson — Staff Writer
Published: April 18, 2016

IC Crushes is a Twitter account that allowed students to submit “crushes” about other students anonymously through a Google document. The account has been active since March 2014 and also has a twin Facebook page, which is still active and has 1,930 likes as of April 18.

The tweets usually describe how people looked that day or what they were wearing, and while some are polite compliments, many are sexual in nature. “Hot pink spandex in terraces dining hall around 6 (10/20). Damn that ass had me mesmerized,” is one example of a tweet IC Crushes has published.

According to Twitter’s policies about suspended accounts, accounts can be suspended if they are spam accounts, if accounts have been hacked or if the account had been publishing “abusive” tweets.

“I don’t feel I post anything that’s offensive, especially because I filter the submissions, so unless a group of people decided to just report the account, I don’t know why it would have been suspended,” the moderator said.

Some students did not understand why the account would have been taken down now after it had been operating for two years. Junior Casey Lederman said the account was fun and there was a thrill to it if someone “crushed” about you. She said she’s never seen anything mean posted on the Twitter account, just inappropriate humor.

Junior Oliver Thomas-Roberts said he could see why the account got suspended because some of the tweets could register as sexual harassment, and the compliments are often objectifying. He said because the account is associated with Ithaca College students, he could understand why it could hurt the college’s reputation.

Junior Lindsay Koenig agreed that while some of the crushes can be cute and light-hearted, other compliments can be explicit and interpreted as harassment.

“It’s kind of creepy to think about that people are watching you and then they’re putting that out there somewhere anonymously,” Koenig said.

A representative from the Office of Public Safety and Emergency Management said Public Safety did not have anything to do with the suspension of the account and has not heard any complaints calling for its removal.