Demographics are playing a key role in the 2012 presidential election.

With the most minorities eligible to vote than in the past decade and women’s issues in the national spotlight, presidential candidates are spending the last few weeks of the campaign targeting these demographics in swing states.

College groups like Ithaca College Feminist Society and the Asian American Alliance are raising awareness about minority issues. They are choosing not to formally endorse one candidate over the other but rather to focus on the issues facing their respective communities as those issues gain more political attention. 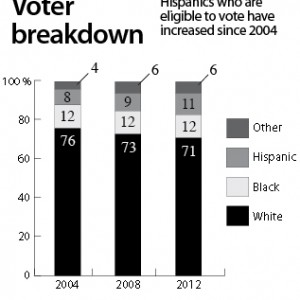 With a record 24 million Latinos eligible to vote in the upcoming election, according to an analysis of the U.S. Census by the Pew Hispanic Center, the Latino community has become a prime target for both political parties.

Lizette Escobedo, director of national programs and community relations for the National Association of Latino Elected and Appointed
Officials, a nonprofit that promotes Latino participation in the American political process, said the association projects 12.2 million Latino/as will go out to vote in this election, which is almost 10 percent of the entire electorate. This may be critical in key states like New Mexico, where the Latino vote can be more than 30 percent of the electorate, she said.

Escobedo said this election is an opportunity for the growing Latino community to voice an opinion and ensure politicians are concerned with policies that affect most Latino voters, especially considering the fact that the Latino community is one of the youngest demographics in the country and will continue to impact the American electorate.

“Just by looking at the numbers, we are the future of this country, so we need to make sure we’re consistently voting and letting folks know what matters to us,” she said.

Senior Daisy Arriaga, a founding member of PODER: Latino Student Association, a group focused on promoting awareness of Hispanic and Latino/a culture on campus, said education is a key issue in this election.

“I’m worried about how students of immigrants are going to be able to pay for college, because a lot of them are low-income,” she said. “A lot of them are not the middle class that the debates are defining.”

According to the 2010 U.S. Census, there are 51.9 million Latinos in the U.S., which is about 16.7 percent of the population, making them the largest minority group in the country.

“The power of the Latino vote will speak for itself,” Escobedo said.

During the 2008 presidential election, 58 percent of eligible African-American youths voted, making it the highest turnout rate of any youth racial or ethnic group since 1972, according to the Center for Information and Research on Civic Learning and Engagement.

Jessica Brown, coordinator of Black Youth Vote!, a grassroots organization of the National Coalition on Black Civic Participation, said support for President Barack Obama from the young black community is as strong as it was in 2008, but new voting policies and laws may stand in the way of turnout this election.

Brown said laws like those that prohibit college IDs from being used as voter identification and voter intimidation efforts like robocalls, calls from each party that intentionally misinform voters about when and where they can vote, are targeted at minorities to decrease voter turnout. This, as well as a lack of enthusiasm for voting in general, contributes to young black voters failing to cast a ballot, she said.

“It’s just opportunity in a growing world that’s at stake for us during this election,” she said.

Earlier this year, Obama became the first sitting president of the U.S. to publicly support same-sex marriage, a position that gained him the support of LGBT organizations like the Human Rights Campaign.

During his first term in office, Don’t Ask, Don’t Tell, a policy that mandated gay or lesbian military officials to keep their sexuality hidden, was repealed, and recently the Obama administration expressed support for a policy that would recognize same-sex marriage as a reason not to deport people living in the U.S.

Romney supports the Defense of Marriage Act, a federal law that defines marriage as a union between a man and a woman, and promises to work toward a Federal Marriage Amendment to the Constitution limiting marriage to one man and one woman.

In a recent poll by Harris Interactive for Logo TV, the economy, healthcare and jobs were the top issues influencing LGBT voters, and 65 percent of LGBT individuals surveyed plan to vote for Obama.

“LGBT rights shouldn’t be left out of the conversation,” she said. “It could go backwards from all the advancements we’ve had.”

Karthick Ramakrishnan, a politics professor at the University of California-Riverside, who was one of the principal investigators of the 2008 National Asian American Survey, said Asian-Americans care most about the economy and jobs. He said healthcare and education are also important to them, and on those issues the community tends to favor Obama.

Senior Kristy Zhen, president of the Asian American Alliance at the college, said the group will not endorse a candidate in the election because they want to be open to students of different political viewpoints.

A Gallup poll conducted this month found that female voters in swing states rank abortion, jobs and healthcare as the most important issues in this election, while men selected jobs, the budget and the economy.

Garces said there is more at stake for women in this election than some people may think, and people should consider women’s rights and reproductive rights before casting a ballot.

“A lot of advances that have taken women a long time to get could be rolled back,” she said.

Rachael Hartford, politics columnist for The Ithacan, gives her take on the latest developments in the 2012 presidential election.

At this point in the election season, we are in the final stretch. With only a few undecided voters left and only a handful of swing states truly up in the air, we ask ourselves: What is likely to tip the election in favor of one of the candidates? 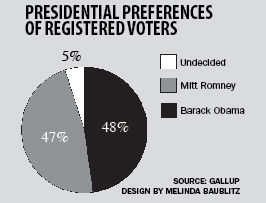 This past week we saw the finale of the four debates. Now, typically, we don’t see debates affecting public opinion too drastically. According to political scientist Tom Holbrook, despite poll volatility during the weeks in which the debates are held, the numbers usually settle surprisingly close to where they were before the debates began.

The 2012 election has proven to be the exception. While the polls have indeed settled, there were several significant, potentially game-changing moments that have already shifted polls. President Barack Obama’s nearly four-point lead following the Democratic National Convention was erased by Mitt Romney’s first debate performance. Obama’s subsequent comebacks in the final two presidential debates have improved the public’s opinion of his leadership. Unfortunately for Obama, usually when the challenger wins the first debate it makes the biggest impact on polls.

Despite Obama sweeping Romney in the foreign policy debate, the topic most Americans seem to care about at the end of the day are jobs.

Check out part one of the election series by Staff Writer Jack Curran.