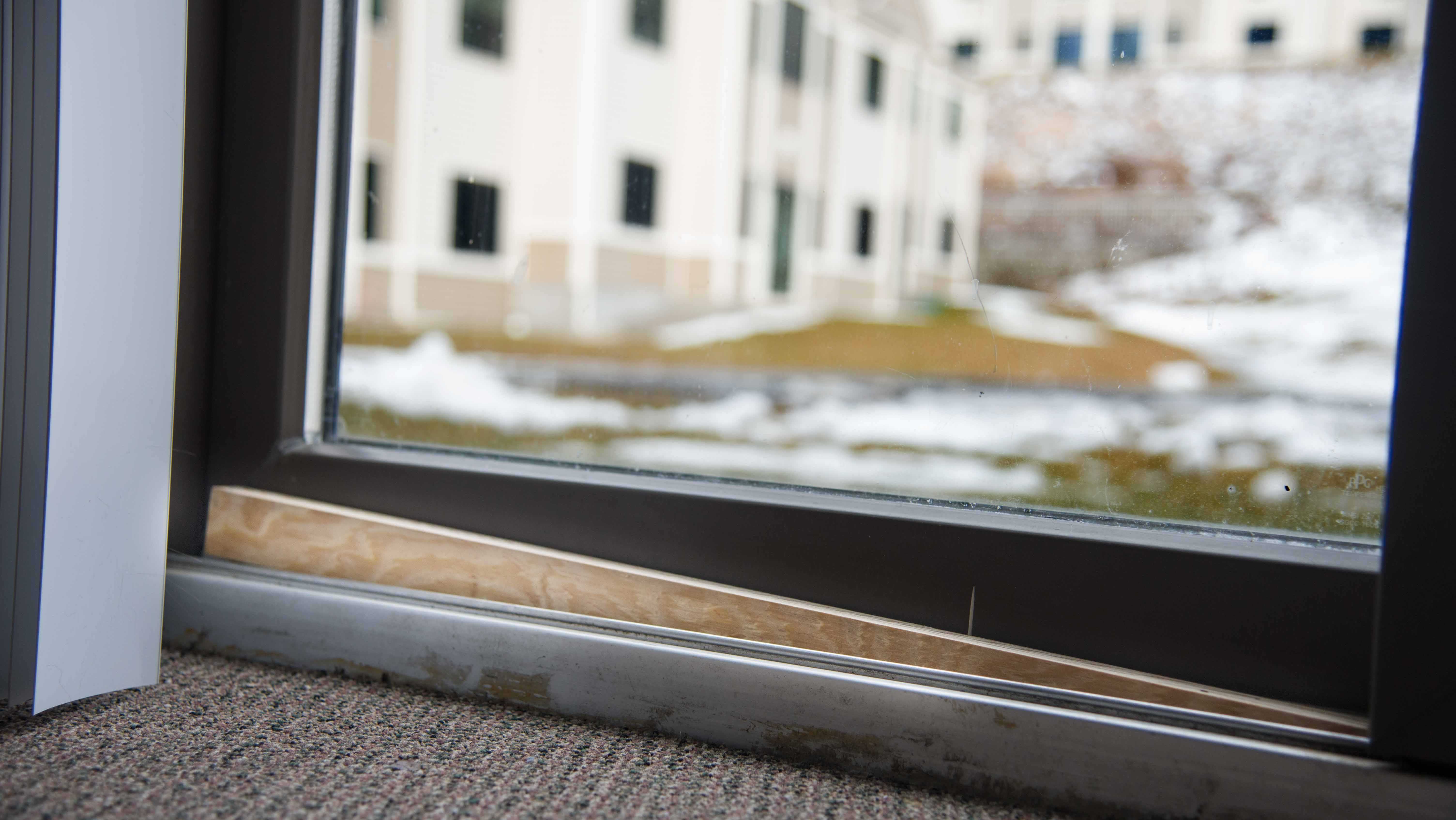 Jennifer Williams/The Ithacan
Since the string of incidents over winter break, students have been offered the option to pick up wooden blocks to be inserted inside the track of their sliding doors. The wooden block forces the door into the closed position without requiring expensive modifications.
By Jessica Ferreira — Staff Writer
Published: February 20, 2016

Over the course of the 2015–16 winter break, the Ithaca College Circle Apartments complex experienced three burglary incidents and one incident of criminal trespassing. Although the investigations of these incidents are ongoing, the campus community has put a larger focus on educating students on how to prevent becoming victims of crimes of opportunity.

Senior Tyler Campolongo, a Circles resident, was a victim of burglary. When he returned to the college Jan. 17, he realized that his TV had been stolen. Although he said he had locked his sliding door over break, there were pry marks indicating forced entry into his apartment from the second-floor balcony.

Campolongo said he found the sliding doors to be a security concern.

“That lock is really not a lock. It’s just a sort of latch,” he said.

Since the incident, the Circle Community Building has offered students the option to pick up wooden blocks to be inserted inside the track of the sliding door. The wooden block forces the door into the closed position, without requiring expensive modifications. An email from Maggie Wetter, the Circle Apartments community director, was sent to residents Jan. 23, informing them about this security precaution.

However, Public Safety is not planning to change the locks in the apartments or make any other serious improvements in the living spaces.

Campolongo said he believed the reaction to the Circle Apartments break-ins was an appropriate one and that the wooden blocks were a simple and inexpensive answer to the issue.

Crimes of opportunity do not tend to be premeditated and often occur when criminals see a situation where they can commit a criminal act in the moment, according to the National Institute of Justice. Another Circles resident, who asked to remain anonymous, was in her apartment when a man trespassed into her residence through the second-floor balcony over winter break.

The resident said she heard people trying to enter her neighbor’s apartment just minutes before. The criminals had also tried her front door before resorting to the balcony. She said when the man saw she was in her apartment, he escaped by jumping from the balcony. The resident said she believes a group of people may have been involved in the incidents, as she heard multiple voices outside of her apartment right before the incident took place.

Terri Stewart, director of the Office of Public Safety and Emergency Management, said taking preventive steps can greatly decrease instances of crimes of opportunity. By sending out alert emails reminding students to protect their belongings and living spaces, she said, she believes education will create a safer campus.

“Keep your doors locked. Keep your windows closed when you’re not there. Lock up your valuables,” she said.

Bill Kerry, lieutenant for the Department of Patrol and Security Services, said the structure of the apartments may make them more susceptible to break-ins, making it more important to use preventive measures when leaving an apartment for an extended period of time.

Public Safety also increases patrols and visibility over break periods, as burglaries are one of  the more common crimes during those times, Stewart said. Although the Circle Apartments are on the edge of campus and close to a main road, Thomas Dunn, investigator for the Department of Patrol and Security Services, said he believes this does not mean the Circle Apartments are under any less security.

“Having two officers here all the time, the Circles aren’t any more isolated than the edge of our building than to the Circles property,” Dunn said. “Our whole campus is a pretty concentrated area.”

Wetter said communicating with students is very important in helping them feel safe and secure on campus.

“I reached out to everyone who had a burglary happen at their apartment to see how they’re feeling, and so far, everyone who’s responded to that said they felt safe and comfortable in their space,” she said. “If someone didn’t feel safe in their space, I would’ve worked with them to find them a new location.”

Wetter also said fostering a close-knit community would be key in preventing crimes.

“If you see something, say something to Public Safety and even an apartment assistant,” she said. “Getting to know your neighbors can only help you to be able to recognize that because you start to see familiar faces and know if someone’s entering an apartment who doesn’t live there.”

Stewart said although there is no increase in reports of students’ feeling unsafe on campus, it should be widely understood that there are options for students who do feel uncomfortable at the college.

“We can use this as an opportunity that if people do feel nervous or uncomfortable, we would encourage them to contact us, as we would be willing to work with them and Residential Life for some options that may be available to them.”