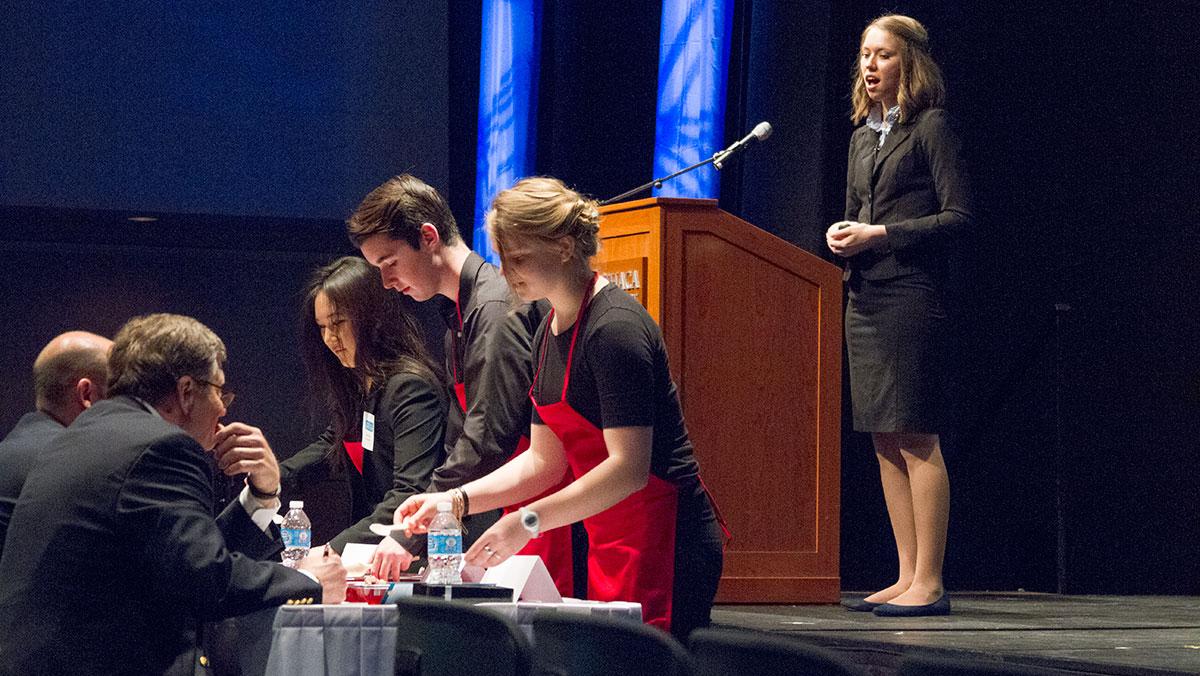 Student entrepreneurs can now sign up for this year’s Business Idea Competition, which provides opportunities for the development of business ideas that students will present Nov. 12–13 and 20 to a panel of judges. The first-place team in each of the three tracks will receive $1,000 each to continue their ideas.

Last year’s cohort of winners have been developing their projects and ideas based on feedback and support from the competition.

Last year, senior Zach Briggs won first place in one of the three categories, the Lifestyle track, with Drain Flower, a device that helps keep drains clean. James Newton ’14 and Antoine Connors ’14 won first place on the Health and Safety track, with SnoBall, a reusable ice massager to relieve foot pain associated with plantar fasciitis. Luca Pandolfi ’14 placed first on the Services track of the competition with Eterna, a sustainable mass-production farm that survives in arid climate.

Brad Treat, instructor in the Department of Management and organizer for the Business Idea Competition, said he has been continuing to mentor the three winners in different capacities since the competition ended.

He said Pandolfi is in a “holding pattern” while he gains professional experience to be able to successfully apply for more grants and begin developing Eterna.

Although Briggs decided not to pursue Drain Flower, due to the fact that he does not have much time as a current student, Treat said he has been working with Briggs on a new idea that he will pitch at this year’s Business Idea Competition.

Newton and Connors are now working on prototypes of their product in Rochester, New York, Treat said. Newton said the team has taken the ideas and suggestions from the competition and implemented them in the most recent prototype. In the near future, he said, they hope to secure presales and finalize marketing and advertising for the product to earn revenue so they can continue to develop SnoBall.

Realistically, Newton said, he and Connors would feel successful if their product was placed in about 20–30 stores in the northeast region within the next year.

Treat said the team aspires to create a whole line of ice and massage products.

Other teams that didn’t place at the top of their respective tracks are also continuing to build their businesses, Treat said. For example, junior Elise Steele has continued to work with her idea, Cravings Delivered, a customized dessert delivery shop geared toward college students. At the competition, she won the audience choice award. Since the competition, Treat said she has done a successful test launch and is working on prototypes.

Tim Reynolds ’14 has continued entrepreneurship since the competition, but not with The Blindside, an invention designed to train football players to tackle in a safer manner that placed third in the 2013 idea competition. Rather, he is continuing with the KettleShell, a device that increases the versatility of a dumbbell, which won in the 2012 and 2014 Business Plan Competition. In total, Treat said Reynolds has won over $42,000 from competitions and grants to launch the KettleShell, and the product has significant sales traction.

Push Interactive, a marketing consultant firm that uses Bluetooth iBeacons to attract customers and collect marketing data — developed by the team consisting of Calvin Chestnut ’14, Austin Shoecraft ’14 and now-seniors Andrew Sowers and Stephen Briggs — has continued to grow and is now one of the first members of Rev Ithaca, a coworking space for startups in the Ithaca area. IBeacons use bluetooth technology to transmit data between iOS 7 devices and the iBeacon itself when they are in proximity to one another.

Although the Business Idea Competition is an academic competition, Connors said, the friendly competition goes to a whole new level because of the real world experience participants have the opportunity to engage in.

“The skills that you develop and the habits that you build while practicing, while pitching, while presenting, really cross over into how you do those things in the real world later on,” Connors said.

Sign-ups for this year’s Business Idea Competition are open on the Ithaca College website until midnight on Nov. 9. Treat said students who enter the competition can be from any major across campus.